PRESERVING THE LANDSCAPES OF THE AZZADENE VALLEY

In recent years in Morocco, the succession of droughts, floods, unusual temperatures, negative changes of ecosystems and productive sectors, and fragile economic conditions are unlike previous decades. This necessitates redoubling development efforts involving economic, political, and civil society actors to counter these adverse effects of climate.
This is why the Moroccan government has launched projects aimed at respecting human and natural resources and taking preventive green measures to combat the effects of climate change, including renewable energy, sustainable recycling of solid and liquid waste, and the National Initiative for Human Development.
Civil society contributes significantly to overcoming environmental obstacles to achieve sustainable development especially for villagers because they are in constant contact with the natural environment and are aware of their own needs. The High Atlas Foundation builds proactive initiatives to serve the inhabitants of remote areas.
Since July 2017, the village of Tassa Ouirgane in the Marrakech region’s Azzadene Valley is taking action against flooding and soil erosion through restoring agricultural terraces and fruit tree orchards. This project is funded by the United Nations Development Program.
The Tassa Ouirgane community experiences a serious short fall of water during the summer. Heavy rain in the winter in the High Atlas’ Azzadene Valley causes severe flooding, destroying many productive terraces and threatening livelihoods, and has even led to the tragic loss of human life. The impact is destabilizing for the local families, and this HAF-UNDP project includes several activities for village men, women, and youth. 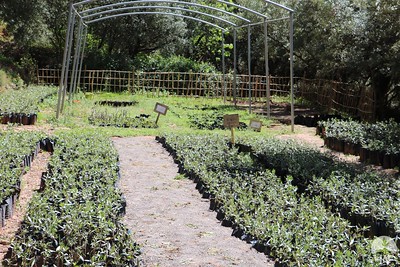 The olive, almond, and walnut nursery of 24,100 trees comprises a 107.5m2 green house, the necessary equipment, and high-quality seeds adapted to the region. The project also includes conceptual and practical training for farmers on how to grow the trees and seed selection.
A basin is 3 x 5 meters with a capacity to carry 38 tons of water has been constructed, a water well 35 meters deep was built, and a solar-power pump was installed – for the benefit of the farmers of Tassa Ouirgane. Further, 960 meters of gabions have also been built to protect agricultural lands against floods caused by the river.
Ninety famers from as many households (including 600 people – 380 women and 220 men) in the region are now benefiting from the project, including capacity-building workshops about irrigation methods and how to improve the productivity of the nursery.
On October 9th and 10th, Amina Hajami, HAF’s director of projects, visited Tassa Ouirgane to assess the development of the project.

Most of the members of the Tassa Ouirgane cooperative are very ambitious 15 girls between the ages of 14 and 20 years. The women of the village have received a series of seven capacity-building workshops. The first was Imagine empowerment activities that constituted 32 hours over four days to channel creative energies towards achieving specific goals and establish better familial and community relationships.
Malika is a divorced woman who has little daughter. She is now working at the cooperative and faces the people’s traditional perspectives of divorced women. She totally changed her thinking with new income and confidence. Before, she was not comfortable leaving her parents’ house to avoid the hurtful words of people, but now she goes out everyday for work and self-growth.
Zahra is able to manage the cooperative by delivering the tasks to members and monitoring their work hours by using a daily attendance list. She described her earlier desire to start a new cooperative that benefit community and women, based on cultivating and marketing medicinal and aromatic herbs and working on apple cider vinegar. The region is very rich in these kinds of plants. The spirit of cooperation and achievement did not leave them despite study and work in the cooperative on Saturdays and Sundays and often during leisure time.
I affirm that the village of Tassa Ouirgane is a typical model of a village in Morocco that has benefited from a comprehensive project by the civic organization, the High Atlas Foundation, which contributes to providing better living conditions for our communities. By Anna Ugolini HAF Volunteer On November 20th the International Day of Childhood and Adolescence Rights is celebrated throughout the world. The date reminds us of the day…