Sport has become a compelling tool to promote solidarity and mutual understanding. It is a universal language that transcends socio-political barriers and has the power to unite people of different religious, cultural, and social backgrounds, through which messages of togetherness can be conveyed.

The vital role of sports is even further highlighted in the 2030 Agenda for Sustainable Development, which was adopted by the United Nations General Assembly in resolution 70/1 of September 25, 2015: “Sport is also an important enabler of sustainable development. We recognize the growing contribution of sport to the realization of development and peace in its promotion of tolerance and respect and the contributions it makes to the empowerment of women and of young people, individuals, and communities as well as to health, education, and social inclusion objectives.” 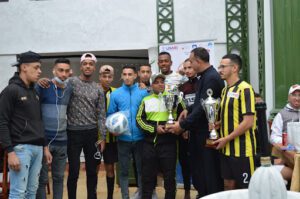 The team from the Mellah of Fes receiving their trophies. February 2022. Photo: Soukaina Kherdioui/ HAF

It is through the channel of sports that four teams from the Mellahs of Fes, Rabat, Marrakech,   and Essaouira had the chance to explore Morocco’s multicultural heritage. Convinced of the vital role of sports in fostering interreligious understanding, Mimouna association organized a Mellah soccer tournament on February 3 in the city of Rabat.

The four teams adopted the exact same names of old Jewish Moroccan soccer teams from the 50s and 60s; Alliance de Marrakech, Alliance de Rabat, Alliance d’Essaouira and l’Etoile de Fez. The soccer field was not just a mere recreational space, but rather a platform for dialogue, learning, discovery and togetherness. In addition, the event paid homage to two prominent Moroccan soccer figures, Mohamed Arouba and Jaco Azafrani, the latter of whom sadly had passed away two weeks before the tournament. 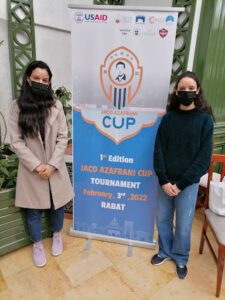 The program also included a visit to the Talmud Torah Synagogue during which Abdelhak El Kaoukabi, Mimouna Association Secretary-General and member of the Jewish community, spoke about the Jewish beliefs, customs, and traditions. The participants were highly attentive and curious to learn about the similarities and differences between the Jewish and Muslim faiths. They asked several questions and were deeply invested in the conversation, which reflects their openness and willingness to embrace differences. On our way out of the synagogue, one of the participants suggested that we recite Surah al-Fatiha for the departed soul of Jaco Azafrani, a prominent Jewish-Moroccan soccer player who breathed his last on January 16, 2022, two weeks prior to the tournament that was named after him. 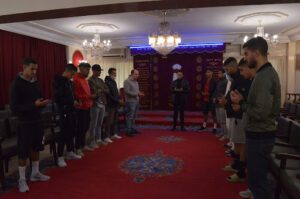 The participants reciting Surah al-Fatiha for the departed soul of Jaco Azafrani during a visit to the Talmud Torah Synagogue. February 2022. Photo: Soukaina Kherdioui/ HAF

Gathered in a circle, the teams stretched their hands with their palms upward, recited al-Fatiha, passed their hands over their faces, and left in silence. The recital of al-Fatiha in a synagogue in the presence of a member of the Jewish community was such an emotionally significant moment, a true embodiment of unity and togetherness, and proof that the most common aspect that unites all religions is humanity.

The event concluded with a brief tour in the Mellah of Rabat during which the teams had the opportunity to explore its narrow alleyways and compare its features with those of the Mellahs in each of their respective cities.

Soukaina Kherdioui is a field coordinator for the USAID Dakira program and is currently based in Rabat. Dakira, implemented by the High Atlas Foundation and its partners, aims to strengthen inter-religious and inter-ethnic solidarity through community efforts that preserve cultural heritage in Morocco. 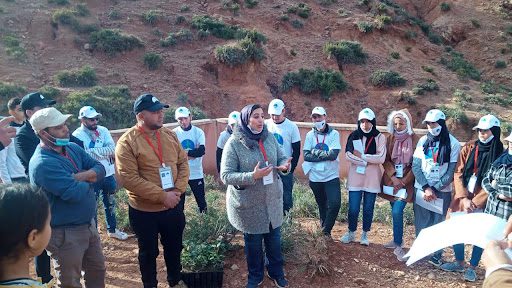