Hope Growing in the Cradle of Diaspora

Hope Growing in the Cradle of Diaspora, Media for Freedom.

Meandering through the dusty foothills of the Moroccan Atlas Mountains, I played an earnest game of speculation. I knew of my destination, its history and constitution, but had yet to see it or feel the restless potential it encapsulated. The gentle hum of the engine, propelling me past the road’s serpentine bends, coalesced my frenetic thoughts, slowly reconciling my uncertainty for what was to come.Just after midday, I reached the millennia-old mausoleum of the venerated Hebrew saint – or tsaddik –, Rabbi David-Ou-Moché, one-hour northwest of Ouarzazate, the Gateway to the Sahara. Through brilliant sunlight, my eyes traced the alluring white silhouettes of buildings standing starkly against their earthen decor. It was these very same edifices that had imbued themselves into the mind of Dr. Yossef Ben-Meir – the President of the High Atlas Foundation (HAF) – more than a quarter-century ago. This sacred Jewish burial site, one of over 600 within the Kingdom, emanates reverence. It is a vestige of the once half a million strong Jewish population that had called the region home for two thousand years, and, in its persistence, a testament to Morocco’s unshakable multicultural ethos. Today, this holy place also serves as a paradigm for the future. It is home to the High Atlas Foundation’s House of Life project, and, subsequently, one of only two intercultural tree nurseries in Morocco. 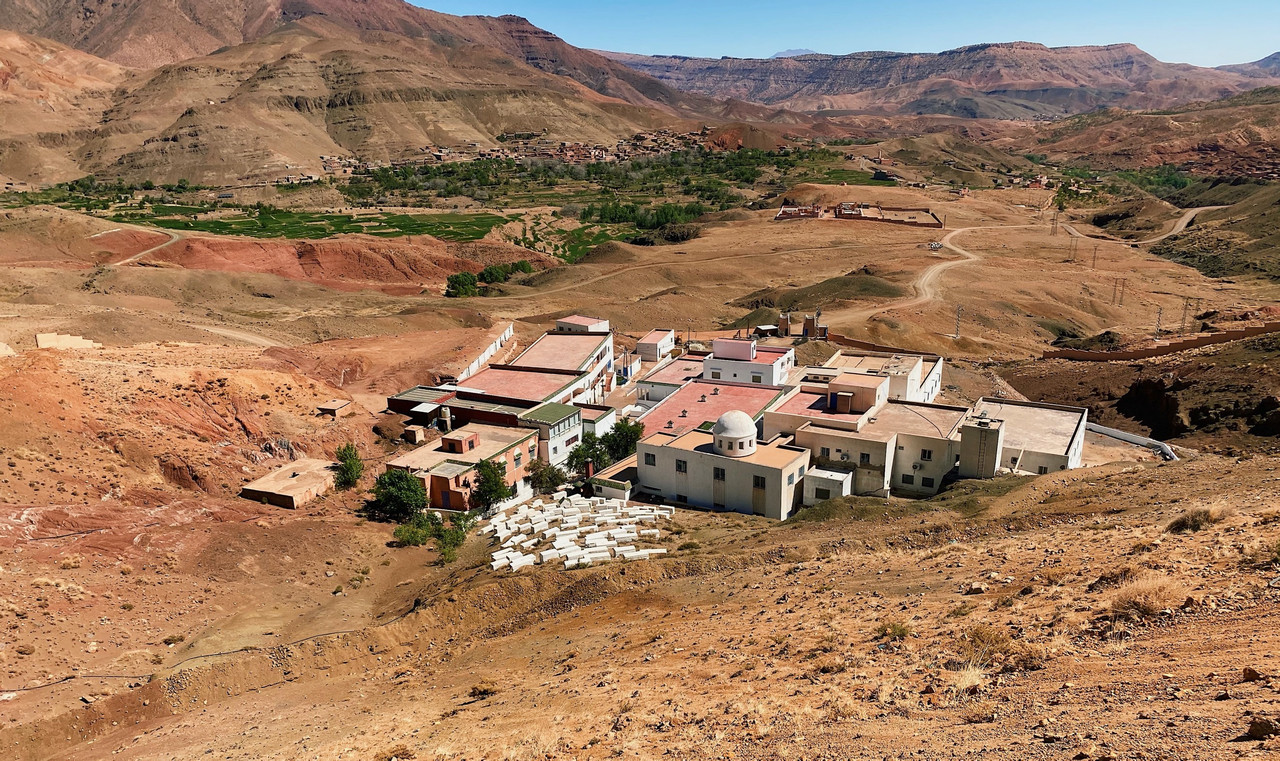 From the first moment I learned of the House of Life initiative, it commanded my attention. As someone with Jewish heritage, albeit secular, and friends of many faiths and backgrounds across the world, I have sought to understand why the relations between religious and cultural groups in North Africa and the Middle East are perpetually marred by divisiveness and convoluted historical debates. Yet, the biography of intercultural cooperation I found presented by House of Life deviates from these narratives, illuminating, rather, the age-old solidarity shared between different groups in Morocco – notably, Jews and Muslims. House of Life upends the oft accepted belief that the millennia of violence and conflict within this topography is intractable and incessant, and, instead, presents a hopeful and intimate account of the abiding mutual respect and kinship fostered between different sects.

Although the construction of the nursery at the tomb of Rabbi David-Ou-Moché has not reached completion, the skeleton of what will soon be an effervescent body is rapidly taking shape. High above the sublime buildings, at the crown of the hill, an industrial digger hews out a hectare-long agricultural terrace, tossing great heaps of earth to the side. This space will be the wellspring for more than one million seeds – particularly varieties of almond, carob, cherry, fig, pomegranate, and walnut. Over three years, the majority of these saplings will be donated to approximately 5,000 local farming families and 2,000 public schools, with the remainder dedicated to arresting rampant erosion in the area. At these locations, and hundreds of others, HAF continues to germinate the environmental, social, and historical awareness of future Moroccan generations. The Foundation’s longstanding educational programs on these subjects raise the cognizance of participating students while also setting forth action-based measures, tree planting and empowerment training, that individuals can emulate in their daily lives. 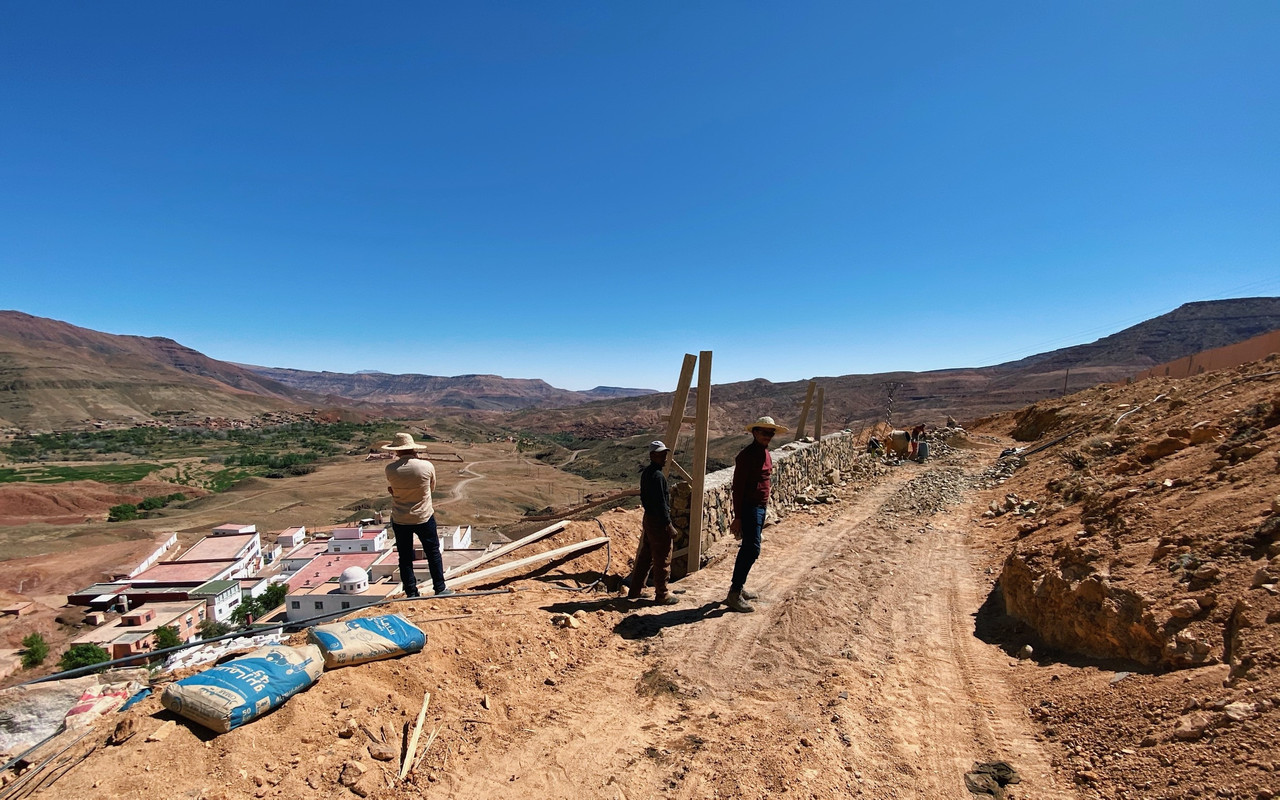 None of the development efforts at Ouarzazate – and the ensuing benefits generated for the local community – would be possible without the benevolent support of HM King Mohammed VI and the Moroccan government. Their continued sponsorship of intercultural projects, including the restoration and preservation of historical and holy places, sets Morocco apart from its peers and the international community at large.

While the nursery near Ouarzazate will, indeed, be monumental, it is not the first of its kind. That distinction falls on the facility adjoining the 700-year-old burial site of healer Rabbi Raphael Hacohen, located 25 kilometers south of Marrakech at Akrich.

“My grandfather was the guardian in this place,” says Abderrahim with a smile, “everyone [from the nearby Muslim community] came to him to offer their animals and food to visiting Jews.” Abderrahim Beddah has a kind face, with dark, bright eyes that beam out from beneath his straw hat. He is not unlike the hundreds of other men and women I have met these past months on my sojourns in the Moroccan Atlas and beyond – generous, affable, forthcoming. Yet, the position he occupies is unprecedented. As a Muslim tree nursery caretaker and stalwart overseer of the holy Jewish tombs near Akrich – the site where three generations of his family have stood guard –, Abderrahim is on the front lines of a blossoming partnership, one that would likely be judged inconceivable in anywhere but the Maghreb. 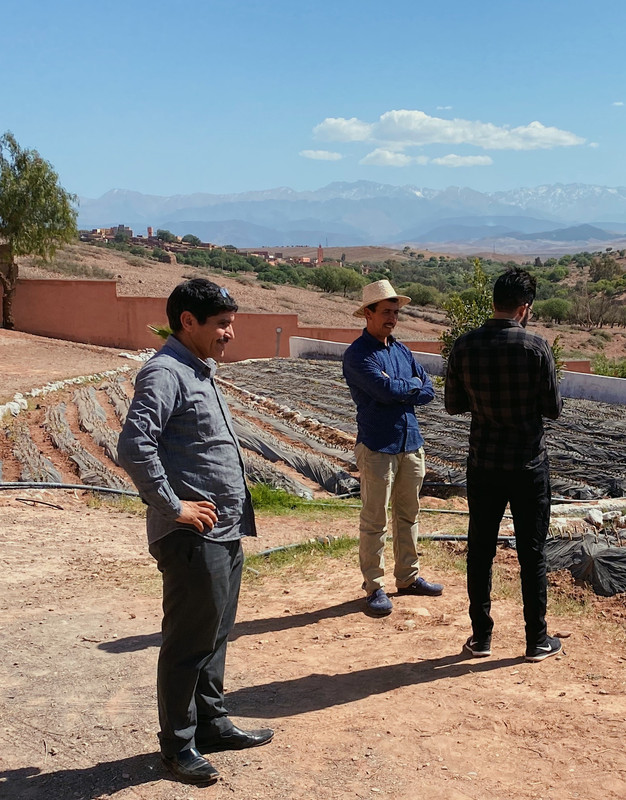 Nevertheless, erecting an archway between disparate, and, otherwise, extraneous societal pillars has not been an easy or straightforward feat to accomplish. Such a task requires the reciprocation of all involved. Coordination between Muslims and Jews, while rarely a straightforward undertaking, has been possible in Morocco. As Abderrahim explained, this mutuality mirrors how Jewish pilgrims, journeying to Akrich, help the local Muslim residents in the same ways that they aided them.

This pluralistic relationship has only flourished since 2012 with the High Atlas Foundation facilitating the free lending of Moroccan Jewish community land for local Muslim farming families’ cultivation – a vision that came to Dr. Ben-Meir 24 years prior while overlooking Rabbi Moché’s mausoleum near Ouarzazate. Thus far, the results of the Akrich nursery have been inimitable, both qualitatively and quantitatively. In the past eight years, it has grown over 180,000 almond, argan, carob, fig, lemon, and pomegranate seeds, which, at maturity, have been transplanted to individual plots across Morocco, under the care and for the benefit of approximately 1,000 local farming families and 130 public schools and their students. 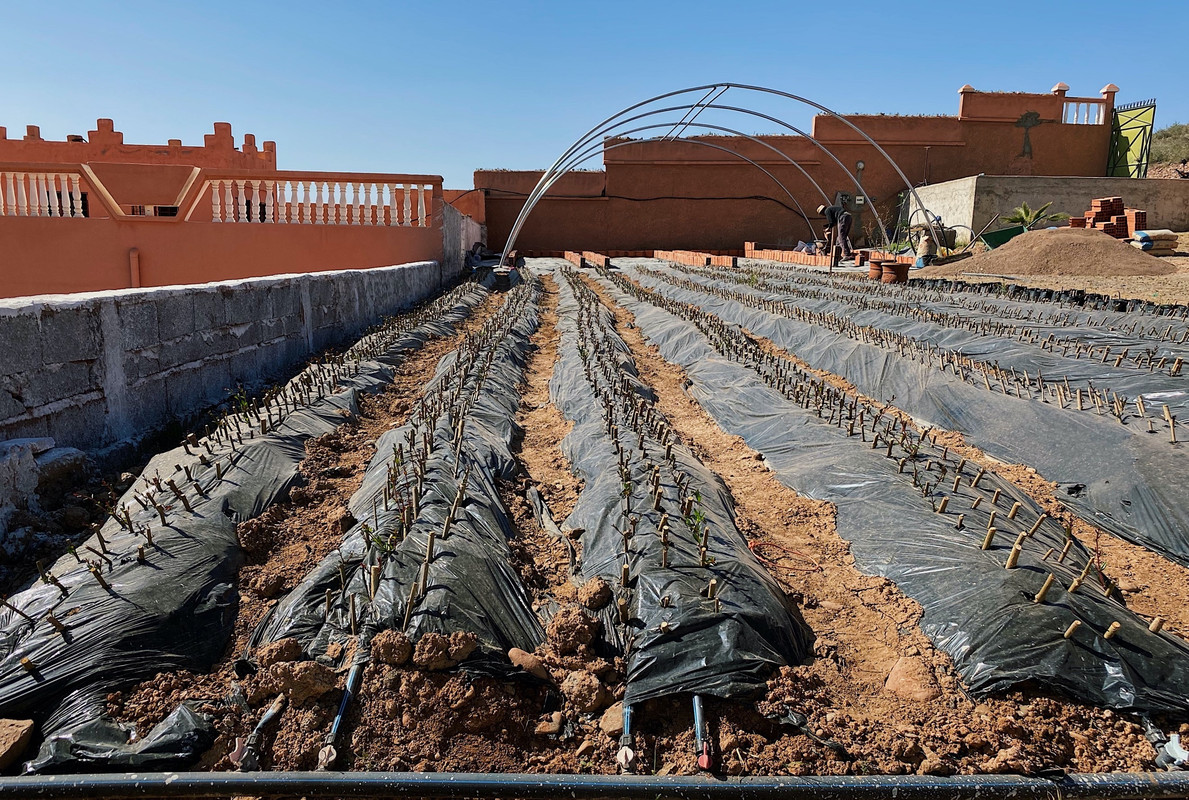 Abderrahim, as a benefitting member and leader within the surrounding community, attested to the palpable human impact the tree nursery has delivered. He himself receives health care and social security coverage under the project’s administration, both of which he did not have access to before. “Previously residents could not find fruit trees and [when they did] they had to get them at high prices from faraway places like Ourika,” which is over an hour and a half away. In contrast to past communal tendencies, he relished how now “the [High Atlas] Foundation supports all farmers in the region by giving them trees for free,” and discussed his hope that the nursery’s activities will continue far into the future “to [both] combat desertification and improve livelihoods.” 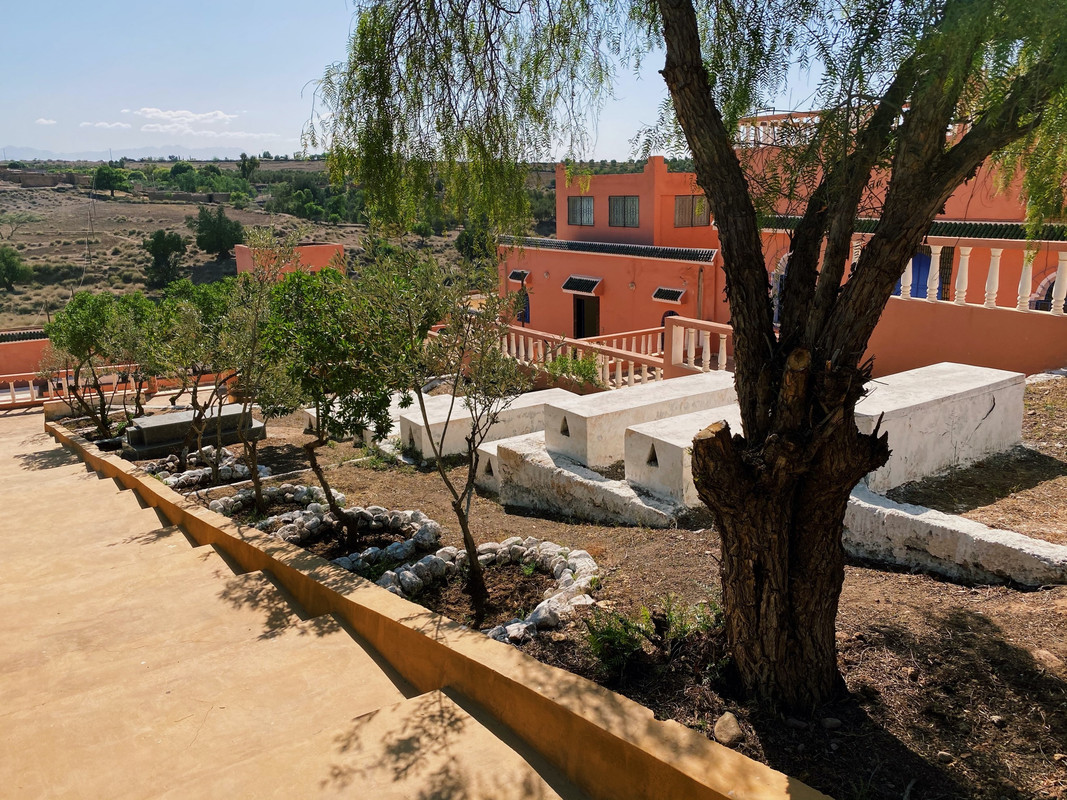 However, the residual social and environmental impacts of HAF’s House of Life initiative are farther-flung than merely offering fruit trees to those who desire them. The presence and prosperity of these nurseries are the ultimate manifestations of an unparalleled relationship forged between different Abrahamic religions and their followers. Despite their novelty, the roots of these tree nurseries are ancient and entrenched, derived from the esteemed sects they celebrate. In this way, they are as timeless as they are current and momentous. While it is illogical to suppose that all countries are as well-positioned as Morocco to cultivate intercultural solidarity on this scale, it is not unreasonable. For, they must only turn – just as I did – to the relics of the Jewish diaspora in North Africa to see for themselves the hope that grows there.

Nicolas Pantelick is from the United States on a gap year before university. He has been exploring Morocco’s cultural history and traditions through conversations with local people around the country.

– Link on the web page to this publication : https://www.sdjewishworld.com/2020/04/07/jewish-muslim-partnership-flourishes-in-morocco/