Women’s Rights in Morocco – What I learned

I was honored to participate in a field trip to the Moroccan countryside region of Al-Haouz, where local NGO, High Atlas Foundation (HAF), was diligently fulfilling its mission to empower women. We arrived at the expansive farmland and were greeted by the many kind-hearted women working in the fields, planting and harvesting crops. I learned that a lot of these women were widows, single mothers and divorcees, often ostracized by society and with little or no means to provide for themselves or their families. With the help of HAF, they were able to better their lives by learning sustainable agriculture, including nursing trees and medicinal herbs, clean water and waste management, and environmental stewardship. 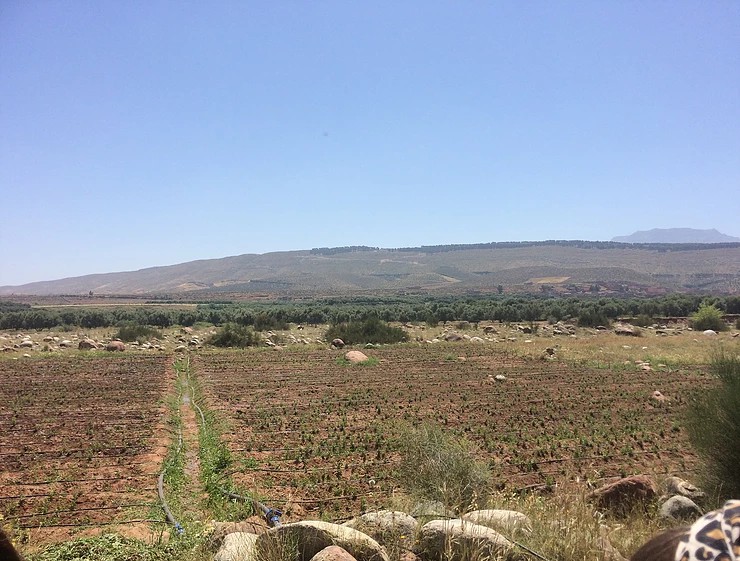 Beautiful natural landscape of the fields 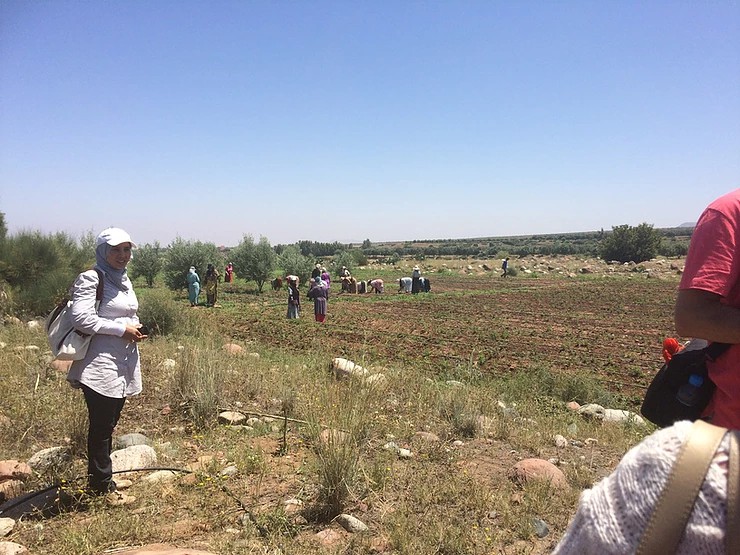 High Atlas Foundation Women hard at work in the fields

We sat down to a rich breakfast spread the women prepared from the natural ingredients they had obtained from the environment – cakes and breads baked from the flour they milled; dates, olives, olive oil and jam from the trees they nurtured, eggs from the chickens they raised, and butter and cheese from the cattle they reared. After breakfast, we gathered around the women as they told their stories and answered our eager questions about what it is like being a woman in Morocco. 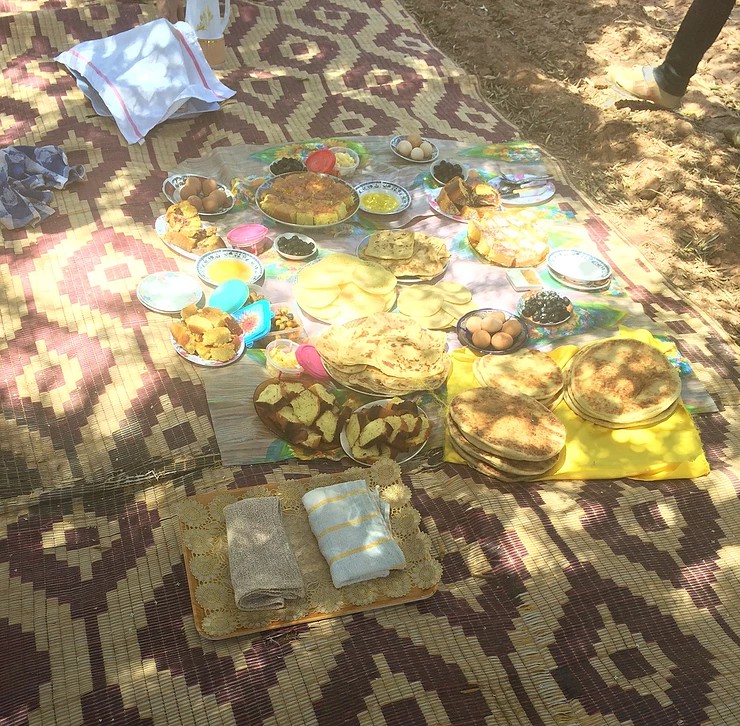 Wonderful breakfast spread prepared for us!

Listening to these women was awesome and enlightening; a truly special experience that evoked laughter, tears, dancing and singing. As each woman told her story, I reflected deeply on the common themes in each story; themes I was familiar with from my many readings and observations of Moroccan culture.

The women of Morocco have been in constant battle with the cultural traditions and teachings that have seen them struggle to achieve certain rights since the country’s independence. There is an overwhelming adherence to traditional gender roles, which stipulate that men belong in the public sphere, working and directly affecting the society, while women belong at home to serve as good wives and mothers. Similarly, men are the decision-makers and it would be in the best interest of the women to obey the men, without voicing too much of an opinion. Consequently, any woman who deviates from these norms is looked down on and even seen as a ‘threat’ to the culture. These concepts and practices reinforce the age-old tradition of patriarchy, which manifests itself in different ways in Moroccan society.

The Moudawana (Family Code) covers all family matters related to marriage, divorce, parentage, custody, and inheritance. It is heavily influenced by the country’s official religion – Islam, thereby serving as a social and moral guide for Moroccans for decades. However, it has also been interpreted to be heavily patriarchal in the recent past. For this reason, the Moroccan parliament was pressured into revising the Moudawana, affording women more rights than under the original code. “While this is a good thing”, one of the ladies at HAF told us, “society is still taking time to adjust completely to the changes, particularly in the home setting”. In a lot of homes, women are still expected to stay at home while the men work. Another lady lamented that “marriage often becomes an obstacle for a woman who is looking for a job, because employers could say that she should be at home instead of in the workforce and decide to reject her application”. She added that this hindrance “creates feelings of unproductivity and a lack of purpose, especially in cases where a woman discovers that a friend of hers has been allowed by her own husband to find work”, thus adding insult to injury.

In recent years, the push for women’s rights has grown and garnered strength, featuring a desire for the evolution of women’s roles in society. NGOs have been increasingly instrumental in advocating for women’s rights, empowering them, and establishing them in the public sphere. The first two post-independence NGOs formed – L’Association Démocratique des Femmes Marocaines (The Democratic Association of Moroccan Women) and L’Union de L’Action Feminine (Female Action Union) – gave rise to many smaller women’s associations which have emerged to combat violence against women, gender-based legal and cultural discrimination, under-representation of women in government and the economic sector, and illiteracy.

The microfinance sector is also crucial in helping women move into the public sphere. With the loans given, clients are able to transition from the informal economy to the formal economy, and take care of themselves and their families. During a separate visit to Fondation ATTAWFIQ, we were able to go into the Marrakech neighborhoods and meet with some of the foundation’s female clients. Meeting with these women made it easy to understand just how much microcredit helped them in setting up their businesses and sustaining them. Many women start a retail business, and they generally use the loans to rent spaces in buildings for their business, to handle the basic facilities that make up the interior of their shop, and to buy the goods that will be sold to new customers (or materials that will be used in making goods that will be sold). It is not an easy process, and this is why it is important for them to habitually pay back their loans, which allows them to receive larger amounts of money in the future that will help their businesses grow.

I remember how happy I was for the women we met with at Fondation ATTAWFIQ. These women could obtain the full benefits of the program because they were reliable and paid back their loans regularly. It was a perfect example of how effective microloans can be and just how much clients can benefit from participation. The women beamed with confidence as they showed us their stores, and they were very happy with themselves! While these microcredit institutions are not tailored exclusively towards women, a large number of the recipients of loans are women. This shows how eager women usually are to start their own legitimate businesses and take care of themselves; it emphasizes the desire to be in the public sphere, rather than be relegated to the private sphere.

Unfortunately, there are two main challenges of getting women to participate in these programs. Firstly, a large number of women live in the rural areas of the country and do not have access to microfinance initiatives (which are usually in the cities). Secondly, a lot of women are uneducated about microfinance, which makes it difficult for them to join these programs in the first place. In many traditional households, the women have not worked outside the home and do not know many other skills apart from the household skills they grew up learning. In order for these women to learn new business skills, an extensive period of training is required.

One thing that really impressed me while in Morocco was the fact that all the young urban women I spoke to expressed concrete plans to work in the future. At the time, they were all pursuing an education and were taking their studies seriously, with most of them admitting that they want to go abroad to further their studies. A lot of these young women also desired to work in big companies in Morocco and throughout the world. I also noticed that many of them do not think a lot about marriage, but about their education and future careers, because they view marriage as something that may or may not happen in the distant future (what I would call a more western perspective). A young lady I spoke to teased, “Ugh, why would I want to be a housewife? I don’t want to stay at home all the time and take care of my children and husband… that’s like ancient mentality. I have to work and earn something for myself!”

Interestingly enough, I was intrigued to discover that although young women are focused on their careers, they recognized the societal expectation for women to be active in the home setting and to be somewhat submissive to their husbands (and they were willing to honor it as well)! It was almost as if this is a balance that the majority of young Moroccan urban women know they have to observe in the future.

The mentality for young women in rural areas might be different, in the sense that they do not think about professional careers as much. However, I had to remind myself that it is the urban women who do have opportunities to apply for formal jobs and have more of an independent mindset about women’s issues, which is considered a western (and even undesired) way of thinking for conservatives.

Since he took power in 1999, King Mohamed VI has been keen on giving women more opportunities, and there have been significant efforts to promote female development and empowerment. In 2000, for the first time in the country’s history, the king made great strides by appointing a female Royal Counselor, appointing a woman to head the National Office of Oil Research and Exploration, appointing the first woman to head the National Office of Tourism, and confirming the first-ever female ministerial appointment. These crucial political undertakings boosted the feminist movement’s cause, and showed women that it is okay for them to be involved in the public sphere.

Despite many societal inequalities between men and women, women are becoming increasingly involved in multiple spheres of Moroccan life. There are still challenges though, in the forms of traditionalists maintaining that women remain at home, the women’s rate of unemployment being remarkably higher than men’s, and women having restricted access to land and to bank loans.

Ultimately, the traditional and conservative Moroccan culture certainly cannot be overturned, but it is encouraging that women are increasingly finding themselves able to reconcile traditional and social expectations with the ongoing fight for women’s empowerment.

Speaking with and learning from all the Moroccan women I engaged with during my time there (particularly those at HAF and ATTAWFIQ) was a priceless experience! I will never forget the strength, grace, and bravery of these women to have come so far in spite of their struggles, and to tell their stories confidently and educate me on their culture. I was (and still am) inspired by the fact that they maintained a very positive mindset, often reminding me that “God will take care of everything”. I found myself constantly drawing strength from their steadfast attitude!

I would like to thank High Atlas Foundation, Foundation ATTAWFIQ, and many other similar initiatives for their wonderful work in the lives of so many Moroccans – men and women – who are seeking empowerment and growth. Endeavors such as these are the driving force through which people are able to find hope, and it is my sincere desire that their efforts will continue to produce fruitful, life-changing results! 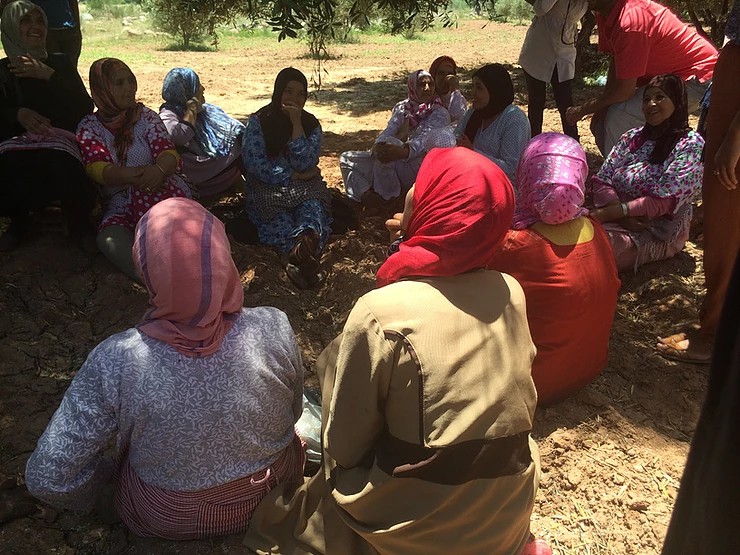 Empowerment: A Solution for Inequality in Rural Morocco

– Empowerment: A Solution for Inequality in Rural Morocco, The Policy Times, By Victoria Burns and Lailah Said (HAF Intern), 02 October 2019. • Arabic: Al-Watan Voice, 3 October 2019. How the…

Investing in a Green Future: Haf’s New Partnership with the University of Michigan Global Scholars Program

By Nora Martetschläger HAF intern From October 2019 to April 2020, HAF will have the pleasure of hosting eight interns from the University of Michigan who will participate…