Rural Moroccans, in reckoning with their environmental degradation, have turned to an unusual source to restore their prosperity: tradition.

Two weeks ago, I set out with three of my colleagues from the High Atlas Foundation (HAF, Marrakech) to the village of Gourrama in the Moroccan Middle Atlas Mountains. Our journey, from sunrise to sunset, took us across rugged terrains and through communities of all sizes. I reveled in the beauty, both natural and created, that flashed by my window as we drove. Each of the passing images aroused in me the innocent excitement one feels at seeing a place for the first time, if even just for a moment.

Solitary concrete buildings partitioned the flowing green fields we slipped through. Washed in fading emeralds, reds, pinks, and oranges, in profile, they appeared as stooped faces, their heavy-set brows animated by the soulful eyes of lit windows. They, witnesses to the passing lives and journeys of all, were solemn and resolute in their observation.

Other constructions lay further back from the road, their glossy tin roofs peeking out from the verdant seas beside which they stood. The space between these oases of life and color did not feel hollow or maligned. It existed alongside the same expansiveness with which the blue sky above stretched up, out, and around us, without limit. 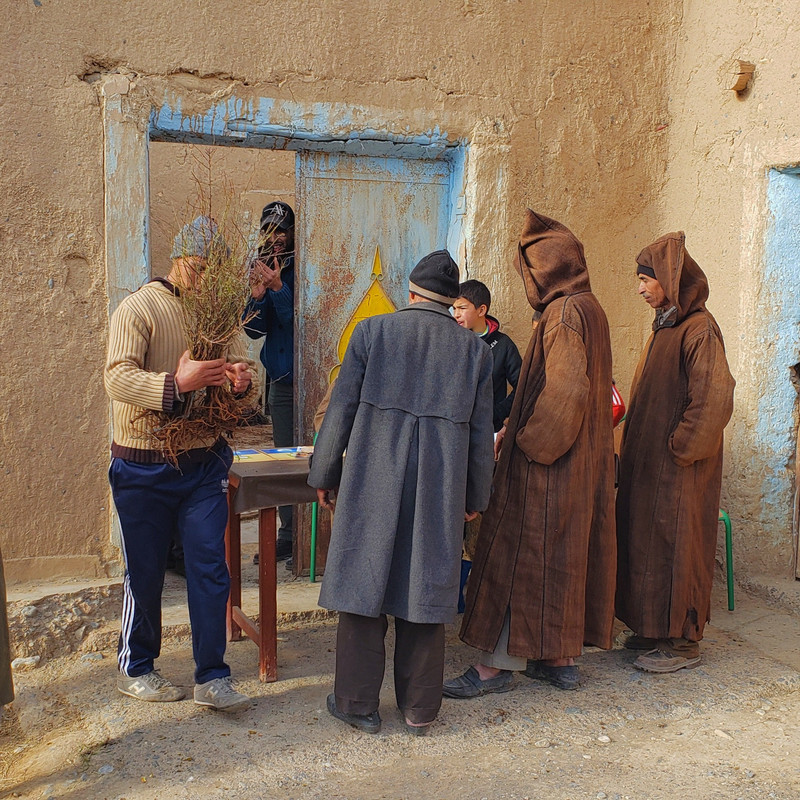 Upon arrival in Gourrama, we met with local representatives to drop off several hundred walnut and almond saplings at surrounding agricultural associations. These were only a fraction of the thousands of fruit trees we had carried with us, tightly packed in the back of our vehicle beside our luggage. One such representative, Tarik Sadki, head of the local association, gave us a tour of the property where we would be staying. Among the many buildings of mud brick and reinforced straw we walked through, one room, in particular, was a source of pride for Tarik. Here, he had curated a museum space over the past 20 years, dedicated to the preservation of the region’s history dating back a millennium, containing dozens of Amazigh, Arab, and French artifacts, from ancient tools and weapons to contemporary pieces of artwork.

This first morning in Gourrama, we distributed trees to 32 local farming families. Men, old and young alike, arrived wearing customary earth-toned djellabas to stave off the morning’s chill and protect their eyes from the rising sun. Excitedly, they hoisted their sapling bundles onto the backs of waiting donkeys, with visible pride and purpose.
In the late morning, we drove to a nearby town for further tree dissemination. There, I asked a handful of farmers about the effects of climate change on their livelihoods. In response, one man named Mustafa said that he has noticed a precipitous drop in rainfall, leading to reduced land quality. This dearth of rain, he revealed, has also impeded communal efforts to expand cultivation range, stabilize income fluctuations, and sustain local apiaries and flocks. One solution that he and others have found for this issue has been to build dams and canals to divert water from rivers to their fields. Moreover, during a dry year, he explained, farmers must plant more drought-resistant staples of barley and corn, even when these crops do not provide enough self-sustaining income. 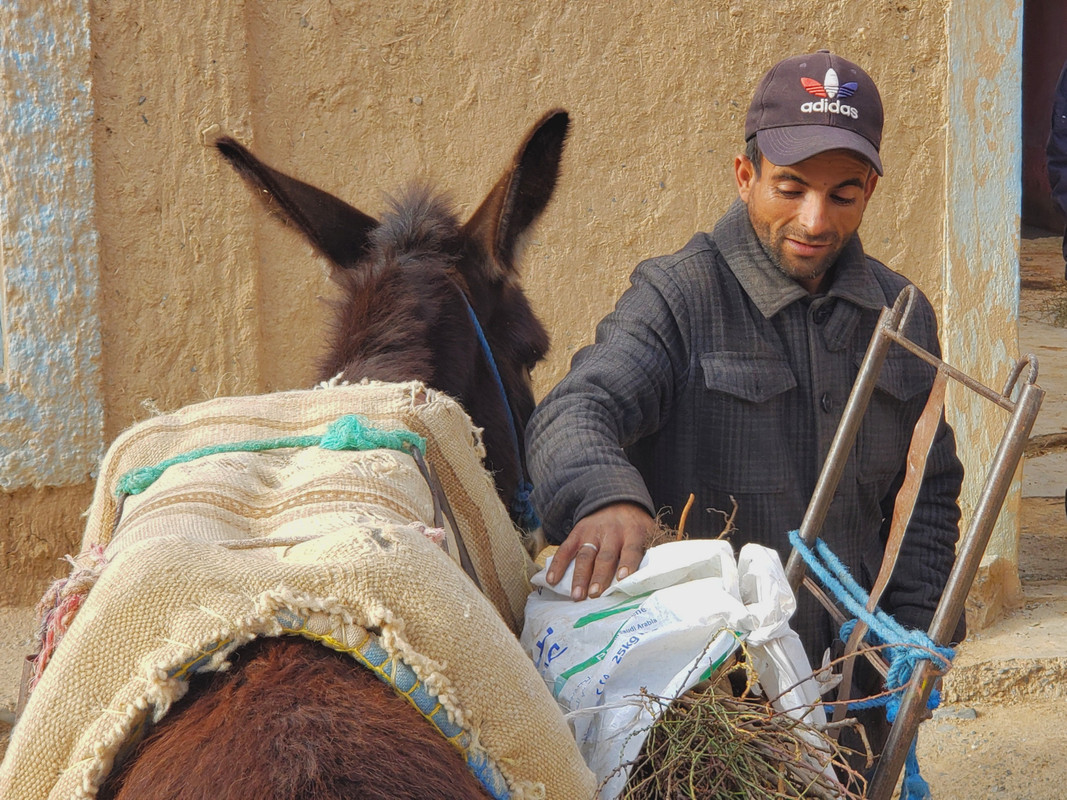 Similarly, another farmer named Hasan recounted that, since a 2008 flood, all of the almond trees have been dying in the region. Because of this difficult reality, farmers seek more environmentally resilient varieties of trees that will flower later in the season, during a time of greater rainfall. Unrelated to climate change, Hasan expressed that a lack of fundamental agricultural training has also been responsible for diminishing yields. He believes that these farming practices, wherein people plant their trees and leave them without care, are a consequence of this deficient education.

At midday, after all farmers had received their trees, we led a discussion on communal wants and needs for the future. Through this conversation, we learned that rural Moroccan farmers often struggle to find the “right” domestic market for their products, toiling to make enough money, even in plentiful years. The majority of their crops are exported raw to European countries, to be processed and sold at high prices for the benefit of large corporations, instead of for their original growers. Moroccans want to access the international organic market, but rarely can because they lack adequate resources to effectively plant, grow, harvest, process, and distribute their produce. Some farmers have taken this challenge head-on, successfully managing the “seed to sale” value chain themselves. In this regard, a few in Gourrama have made moderate gains processing local olives into olive oil.

Beyond this, the group discussion brought forth two final issues: the inadequacy of young children’s school facilities and sweeping rural joblessness. Employment outside the field of agriculture is difficult to come by in this area, and the only occasional jobs available are in animal husbandry and beekeeping. Subsequently, we emphasized that HAF will remain a part of their entire development process, from the distribution of seeds to the certification, processing, and sale of produce, assisted by the USAID Farmer-to-Farmer program. To conclude, we completed a ceremonial tree planting, fertilizing the saplings, freshly laid to rest, with the traditional practice of spreading ash on the topsoil to deliver vital nutrients to the tree roots.

Following a typical late Moroccan lunch, we traveled to a 20-hectare communal farm on an immense plain bordered by low, rolling mountains. It seemed an impossibility, with the wind whipping through our scant jackets and clawing roughly against our flushed cheeks, that anything could flourish amongst such tumult. Yet, we learned, adversity and perseverance, like that which we had seen throughout our visit, was acutely woven into the very essence of the place we stood. This project was created by the local agricultural cooperative with a government land grant, providing jobs for unemployed individuals lacking viable professional prospects, and keeping them from succumbing to the tide of rural emigration.

Ingenuity in the face of hardship is commonplace within this community and the thousands of others in the High and Middle Atlas Mountains. Climate change is just the latest challenge they face. Oftentimes, people find themselves returning to tradition when they encounter problems of modern creation. On our last day in Gourrama, we came upon a small stand-alone corn processing facility where hydropower is used to churn grain into flour. This generational self-sustaining practice has yielded years of profit for the community. Its industrious design and the myriad of aforementioned examples serve as remembrances that, despite an ever-changing world, those who work in symbiosis with their environment will have their dedication reflected and returned.

Nicolas Pantelick is an American student on a gap year before university, who is interning with the High Atlas Foundation in Marrakech, Morocco. Tree Nurseries Have Needs Too

Farmer-to-Farmer Volunteer I am a late career American businessman. Currently, I volunteer about four times each year with NGOs in developing and middle-income countries. I assist across a… Dear Friend, Between now and the last day of March, we have just 48 days to plant trees that will bear fruit and sustainable livelihoods for generations. When we…