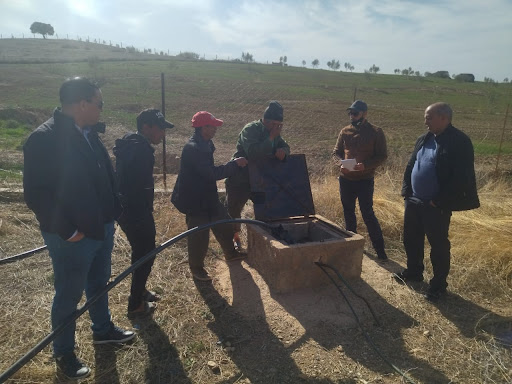 On February 14th and 15th, HAF Program Manager Karam-Yane Azzabi met the local authorities of Ait Oum El Bekht and Zaouia Cheikh (Beni Mellal province) in order to discuss how the water project of Douar Ghirane can be extended.

Indeed in 2014, HAF in partnership with the rural commune of Ait Oum El Bekht, the Association Al Maslaha, and the Moroccan community of the United States built a water tower and dug a well of 104 meters in depth in order to provide drinking water to the local population (20 houses) of Douar Ghirane.

The meeting was held with the Pacha of Zaouia Cheikh, the president of Ait Oum El Bekht commune, the president and representatives of Al Khair Association from Douar Ghirane, and members of local cooperatives.

The first observation was that 52 houses of the village have no access to drinking water and due to the harsh drought that Morocco has been facing for a number of years, the water flow of the well is decreasing and becoming insufficient for the village. The local community proposed to dig another well using traditional and modern methods of water exploration including using solar pumps and at the same time regulating the use of water.

After the meeting we did a visit to the water project.

The drought has severely impacted the underground water table and many villages near Zaouia Cheikh are suffering economically because most of the population is working on agriculture.

After the visit, we concluded that the local association will create a budget estimate of the costs to have an idea about how to start implementing the project.

In order to support the local farmers, HAF distributed 4,400 trees this year in Ait Oum El Bekht and Zaouia Cheikh communes. In addition, HAF is starting to implement the IMAGINE workshop and literacy programs with local women associations and cooperatives.

By Bobby McDonough HAF-UVA Intern Clean drinking water. This fundamental resource in allowing a civilization’s continued function, health, and prosperity is often taken for granted. That isn’t to… By: Salma Derkaoui, HAF Volunteer “Thousands have lived without love, not one without water.” —W. H. Auden World Water Day has been an internationally celebrated day on March…