In the third week of January 2022, the Farmer-to-Farmer (F2F) team traveled to Ouaouizerght commune, Azilal Province, in order to conduct an Imagine workshop for the benefit of 12 women of Wardat Al-Atlas Cooperative. This co-op sells barley-based products, aromatic herbs, Moroccan sweets, and other organic products.

This workshop is the first of its kind to be conducted in Azilal Province, and these women were glad to be part of it. They were enlightened on topics they thought were taboo to talk about and had their eyes opened to certain ways of thinking and analyzing ideas around them. 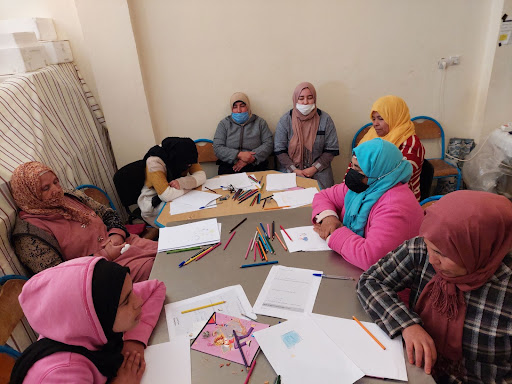 The members of Wardat Al-Atlas during the Imagine workshop
Photo credit: HAF staff

Back in 2017, twelve motivated women joined this co-op, and since then the president has been doing her best to push these women forward, making sure the name of Wardat Al-Atlas is heard everywhere in the region. When asked about how the idea of creating a cooperative came to her mind, Lalla Hafida narrated:

“I have always been fond of pastry. When I was a student in both middle and high schools, I used to write recipes in the school notebooks. My teachers would always get mad at me and tell me off. I could not help it—I was more interested in cooking than math!

Years later, at my sister’s wedding, I was in charge of preparing the Moroccan sweets. I prepared different types of sweets and everyone expressed their admiration for what I could make. That was when one of my relatives suggested that I create an association for making Moroccan pastries. This idea never crossed my mind before, so I began thinking about it and how I could bring it into existence.

In early 2012, my mother fell sick, and we had to take her to Ibn Tofail Hospital in Marrakech. The doctor advised us to get salt-free bread for my mother, and I had no idea where to find it in that neighborhood. My sister and I checked every nearby store but in vain, and we kept walking until we reached this culinary association called Amal. I said loudly: ‘This is what I am looking for; this is what I want!’ My sister thought that I was talking about the bread, whereas I was talking about the ‘culinary association.’ 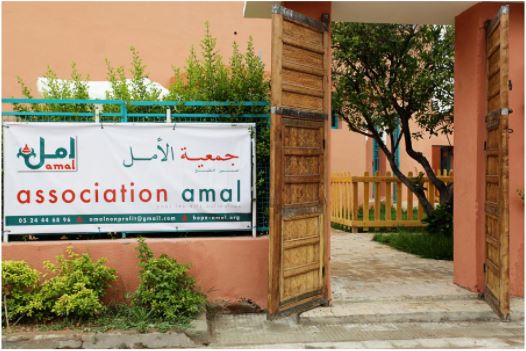 The Amal Center, a non-profit association that supports women in need and trains them in culinary skills.
Photo credit: HAF staff

We stepped inside to see what it was about. When I entered that place, I felt like I was living one of my dreams: This is what I wanted to have, too. I want to create a similar association for the benefit of women in my village: an association where I can help disadvantaged women and train them in making Moroccan pastries. It was the woman at the reception desk who spoke when I lost my train of thought. ‘I would like to see the president, please,’ I said. The lady apologized and asked me to come back in a week because Madame Nora Belahcen Fitzgerald, the association’s president, was not there. I was happy because I would get another chance to discover this place.

It was at the end of this short meeting that my sister reminded me to ask them about the bread, which they make there of course, and I kindly asked her to prepare salt-free bread daily for me, over a period of a whole week. The reason I asked to come daily was not only to get fresh bread, but also to get a chance and enter their kitchen, see how they make things there, and learn indirectly.

The big day arrived and I met Mme. Nora. She was a kind woman with whom I shared my story and dreams. She warmly welcomed me and asked me to join the association whenever I have time. This was a golden opportunity that I did not want to miss; therefore, I respected the timing she gave me and learned different skills with her.

One day, Mme. Nora asked me to visit the Handicraft Industry Chamber of Marrakech, who provided me with further information, for I was also interested in handicrafts. They explained all the procedures I had to follow and all the documents I had to prepare. Once I went back to Ouaouizeght, I began the process of creating the cooperative and submitted the needed documents, and in June 2014 they gave me the ‘green light to start work in my cooperative, to which I gave the name ‘Wardat Al-Atlas,’ The Flower of the Atlas. 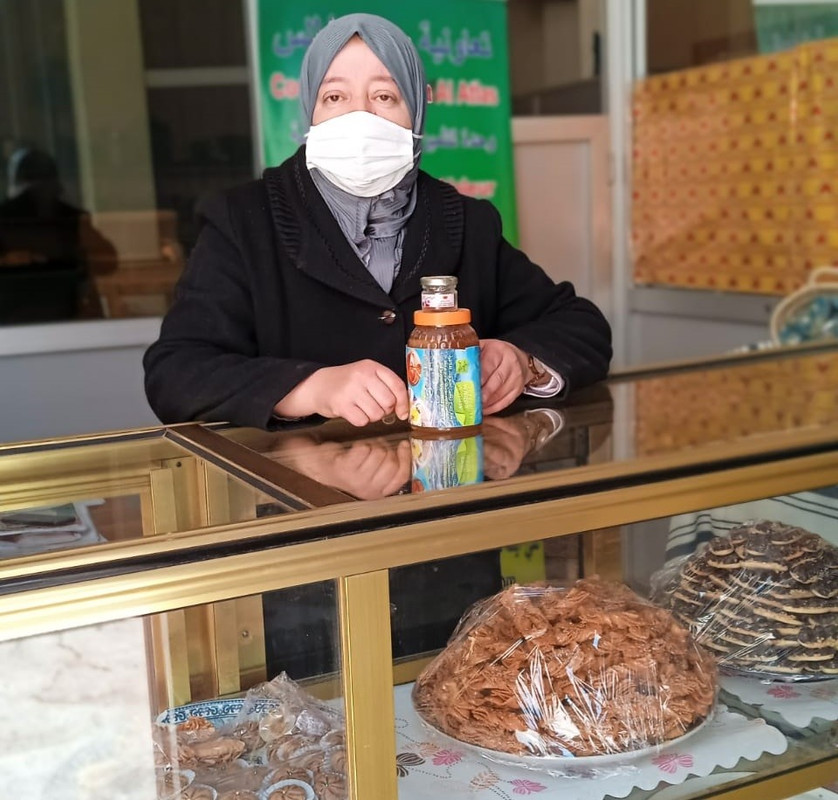 Soon in 2015, we had a deal with a five-star hotel in the province, to whom we sold bread and pastries. Step by step, Wardat Al Atlas grew and so did its projects. The cooperative aims to promote both agricultural and handicraft products. Twelve women work at the co-op baking barley-based bread, Moroccan pastries, aromatic herbs, honey, and other organic products. The cooperative still needs more help in order to get the certification as organic from the ONSSA, and the F2F team will be glad to provide the technical assistance that it takes to reach its purpose.”

At the end of these four days, the women inside Wardat Al Atlas were glad to have this workshop conducted for them in particular. 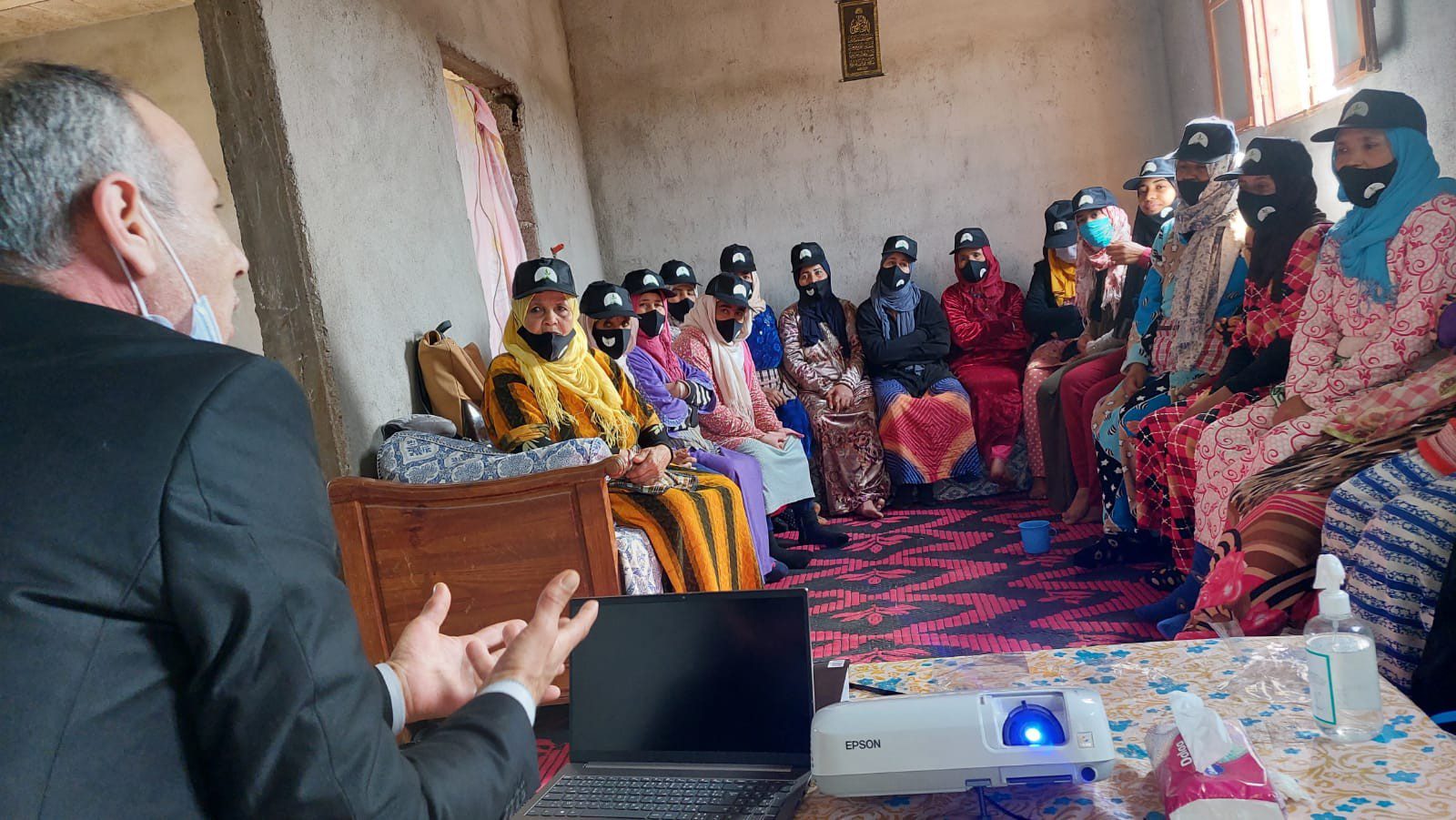 By Zineb Laadam, HAF Field Officer On February 1st, the Farmer to Farmer (F2F) team met Mr. Mohamed Lahssini, the representative of a steering group with whom High…