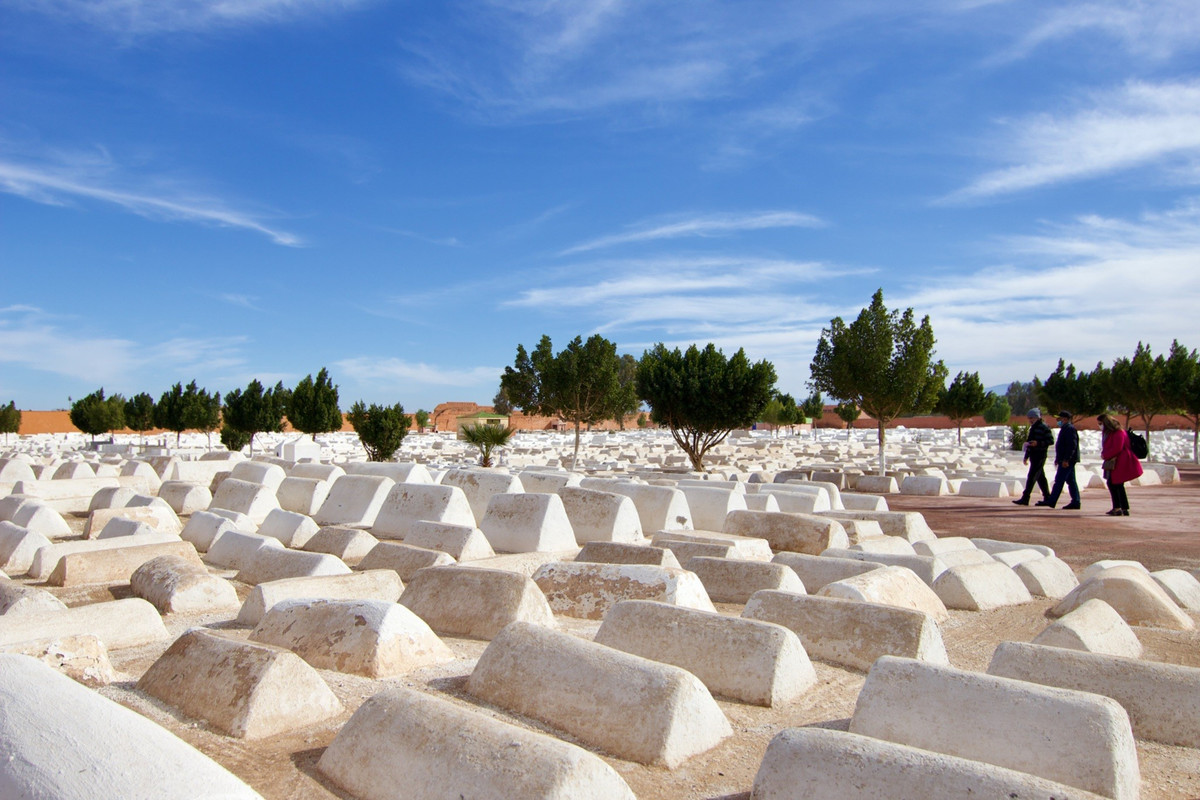 On Tuesday, December 7, my two fellow Austrian volunteers and I had the opportunity to join Dr. Yossef Ben-Meir for the last class he taught for the University of Virginia at the Jewish cemetery in the Mellah of Marrakech. Now, what is a Mellah?  In Marrakech, the Mellah is the very old part of the Medina in Marrakech’s center and used to be the Jewish quarter. The Jewish cemetery holds the name Miâara, after the street name of the cemetery’s entrance. The Hebrew name of this cemetery is Beit Mo’ed LeKol Chai or בית מועד לכל חי . It was founded in the 15th century, even though it is believed that Jewish people have been buried in this area since as early as the 12th century.

During the visit, I came across quite a few small, white gravestones. Later, I learned that these were children’s graves of the thousands of children that had died during the typhoid fever epidemic. Further into the graveyard, blue tombs caught my eye. These colorful tombs are dedicated to the kohanim, also called Jewish priests. Another interesting fact that I learned was the fact that the Miâara Cemetery is the largest of its kind in Morocco. As the largest Jewish cemetery in a country of very rich Jewish history, it is a very popular attraction, especially for Jewish Moroccans – most of whom now reside in the state of Israel.

I enjoy visiting such cemeteries, even though, like so many of us, I link these visits with a grieving, melancholic and heavy-hearted feeling. During this last COVID-ridden year, I have lost a handful of family members and nowadays I try to overcome these sorrowful emotions that come up during cemetery visits of mine and remind myself that all of them are in a better, happier place now. Considering the past so many Jewish people have had to overcome, I think the cemetery we visited is a very positive, peaceful, and precious piece of land. Not only that, a Jewish cemetery can stay without any vandalism for all its centuries, in a nation that does not consider itself Jewish. But also, looking back at the peace talks between Morocco and Israel in late 2020, it all seems like it is headed towards a very beautiful future. Before exiting the cemetery, Dr. Yossef Ben-Meir reminded us three that traditionally, one washes one’s hands before leaving a Jewish cemetery. For me, this feels like a wonderful anecdote to tradition and the past.

Ultimately, after taking in the special energy of this historic and cultural cemetery, Dr. Yossef Ben-Meir led us to the Synagogue of the Mellah quarter. This is not only a synagogue but also a museum of the Jewish past in Morocco. Slat al-Azama synagogue is built in a Moroccan style with an open atrium and the walls are covered in beautiful mosaic-style tiles. The visit to this Jewish holy place right after the cemetery was a very exciting and special experience for me.

This article was completed with the support of the United States Agency for International Development (USAID) Religious and Ethnic Minorities Activity (REMA), and the High Atlas Foundation is solely responsible for its content, which does not necessarily reflect the views of the USAID or the Government of the United States.

By Amal Mansouri, Cultural Field Coordinator IMAGINE workshop in El Menzel, 2021. Photo: Zineb Mallouki/HAF The answer to the questions who you are, or what you identify as…