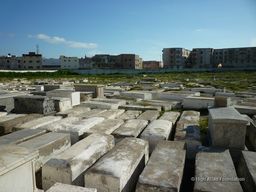 On 14 July, HAF was pleased to welcome a group of US high school students, in Morocco to study Arabic to the site of our cultural heritage project in Essaouira. Over the last months, HAF and partners have been working to rehabilitate the Muslim, Christian and Jewish cemeteries of Essaouira. The group of 35 teenage students and their leaders, including Ms. Melissa Topiacio Long, visited the new Jewish cemetery and the Rabbi Haim Pinto synagogue. They were accompanied by HAF Project and Development Manager, Lynn Sheppard, and Ms. Regine Knafo, a former member of the Mogador Jewish community.

At the cemetery, the students were given a copy of the brochure which HAF and our project partners have developed for tourists about the cemeteries of the three faiths in Essaouira. Lynn gave them an introduction to the history of Essaouira and explained how such a significant Jewish community came to be living in what was known as Mogador.

In 1764 Sultan Sidi Mohamed invited ten Jewish families to settle in Mogador to help him in his aim to make Mogador the most important port of Morocco. Among them, the Corcos family was the most well-known of “Sultan’s merchants”. The Jewish community very quickly represented about half of the population estimated at 25,000 around the turn of the century and remained important until 1960. These wealthier families settled in the Kasbah, or ‘King’s Quarter’ but later two Jewish mellahs were built in the northern suburbs of the town. As trade developed, Consuls and trading agents came to Mogador. Many of these were of Christian faith and are buried in the Christian or Consular cemetery close to the two Jewish cemeteries.

Regine, whose brother, Asher, has been working with HAF on this project, explained some of the practices and traditions of Jewish cemeteries. She highlighted the graves of the cohens (or kohenim) near the cemetery gate. Kohenim were priests who performed their priestly service in the portable Tabernacle until the Holy Temple was built in Jerusalem. Their duties involved offering the daily and Jewish holiday sacrifices, and blessing the people in a Priestly Blessing, known as “Raising of the hands”. For this reason, the graves of the kohenim carry the image of open palms. Having a particular status in the Jewish religion, kohenim are not permitted to enter into the interior of a cemetery and even those who do not have this vocation, but who carry the name Cohen should abide by the same practice and remain near the gate.

The students were interested to learn about the multicultural history of Essaouira and the traces of that tolerance and coexistence today. they learned that Muslims and Jews frequently celebrated religious festivals together. They also learned about Jewish religious practices and were keen to understand similarities and differences between religious practices. They asked why the Jews had left Mogador (in the 1950s and 60s) and how many remained. Only one Jewish family lives permanently in Essaouira today, although many diaspora visit regularly on religious or cultural occasions. Regine explained that although there was no animosity between Muslims and Jews in Mogador, following the fall of the French Protectorate in 1956, many Jewish families (who were often Francophone and allied with the French rulers) feared a resurgent nationalism and felt their future in Morocco was uncertain. Many migrated to the newly created state of Israel, but many left for other countries such as France, Canada (Quebec) and the US.

Following a visit also to the renovated Rabbi Haim Pinto synagogue and an explanation of the renovation of the Slat Lkhal synagogue, Regine guided the students through the mellah into the Kasbah, where they thanked their guides and expressed their appreciation of their multi-cultural introduction to Essaouira where they would spend one week as part of their studies.