TRIP TO A NOMADIC VILLAGE

Trip To Imrikli, a Nomadic village 90 km from Boujdour

It was a hot and windy Sunday, and nearly 1:00 pm when Si Masoud and his wife Zahra pick up Hana and myself to depart to Imrikli, around 90 km from Boujdour city. We took Jrifia road directing our driver to the east of the Sahara. There were no houses or trees to break that monotony of the long, seemingly limitless route tracing along a vast, boundless, desert. It was only the vibrations of the Nissan 4X4 car and the rhythms of beautiful Hassanian songs, and sometimes the burst of our laughter that made us feel that there was still life in that place. We were five in the car: Hana, Zahra, myself, Si Masoud (our driver) and Si Mahmoud, the person who hosted us in his tent in Imrikli and was also our compass on this trip.

The more we proceeded on our way, the hotter the weather became. However Hana and I were craving to discover the place, to see the people there, how they are living and how they spend their days in that exiled, remote place in the desert where all means of technology and civilization are completely absent, where there is no telephone coverage, no internet connection and no TV. Travelling from the city to that place is like travelling in time, from 2013 to the middle ages or earlier. After two hours, we arrived to Grarat Sakka, “ a grassland called Sakka,” where there were some groups of acacia trees  and herbs for goats. Under a large tree, little goats gathered round to enjoy the shade. At every tent we crossed, we found next to it big blue casks of water and Land Rover car. This was also the case for the tent of Si Mahmoud where we stayed to discuss more about the needs of local people in Imrikli nomadic village.

In the tent, there was a man named Mohamed who Si Mahmoud hired to look after his goat herd.  He slaughtered a goat for lunch and cooked it in nomadic way – in Saharawi culture when they host dear guests, slaughtering an animal is a symbol of generosity. Si Mahmoud was making tea and uttered the words of welcoming from time to time. Si Mahmoud likes the Albadia, “ the rural nomadic village,” a lot. He spent most of his life there, and he knows every single detail of the Sahara. Equally, he knows about the problems, changes, and the needs. Some of the most urgent needs the Sahrawi nomads have today, Si Mahmoud was telling us, is water, cell phone coverage and roads. Beside him there was an old radio. He pointed to it and said, “This radio is the only means that connects these people living here with the outside world.” It was so clear that if someone was stung by a poisonous insect, scorpion or snake, he would die because of the far distance to the city, and the inability to call for help.

On our way back home, Si Mahmoud took us to see Bjbajt Abratiil, a water source in a pastureland called Abratil, which the nomads used to irrigate herds but which is now locked and needs to be repaired before it can be utilized again. Its water is very salty but it is useful for the herds, since drinking salt water makes the animals hungrier, and they grow fatter.

Si Mahmoud stated that it was a great initiative that the High Atlas Foundation devoted its time to visit us in this remote area to evaluate our needs and ask for our dreams. He said, “We are so grateful to this organization and we wish all the best for it. 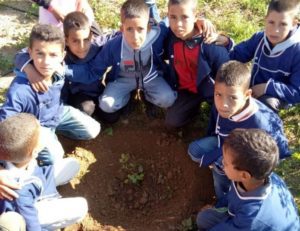 During the 2013 season, HAF planted in total 234,000 fruit seeds and saplings (inclduing also walnut and cactus) – the most HAF and its partners ever planted in…

The High Atlas Foundation (HAF) hosted the US Consul General, Brian Shukan, as well as Political Officer Ann Meceda and Public Affairs Officer Andrea Appell from the US…