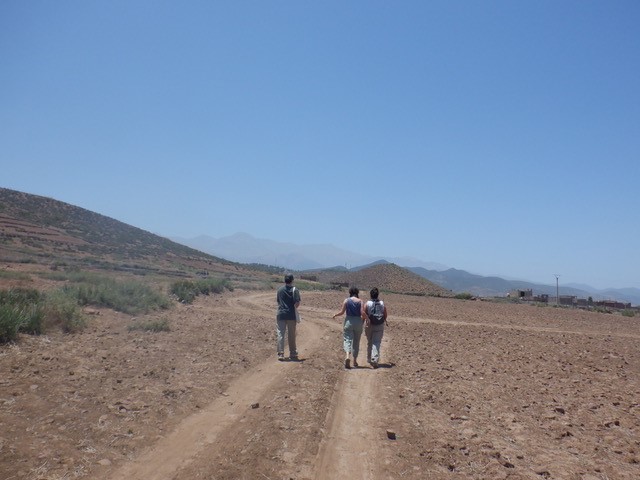 Tuesday of this past week, I along with a few of my fellow interns at HAF got the opportunity to join the tree planting team and visit a location in the Al Haouz province. At this site they are planting almond, carob, and olive trees; in total 40,000 trees are going to be planted.

When we arrived at the site we were greeted with mint tea, which I have learned is a staple in Morocco, and has become an expected first step in any visit. We then went to the location where the tree saplings were being stored after they had been brought from the nursery. Multiple assembly lines were quickly formed to transport the tree saplings efficiently into the truck, so they could be brought to the area where they were going to be planted. We loaded the almond and olive trees into the truck for transportation. Going into the day I was not able to distinguish between an olive tree and an almond tree; however, I quickly could tell the stark difference between the two trees and was able to identify the difference without an issue.

Eventually, we were able to load the truck with the number of tree saplings that were needed at the actual planting site, not without several economics jokes from my fellow economics major, Keely. Discussing how there was potential diminishing marginal productivity caused by too many participants in our assembly line. When the tree saplings were in the truck, I returned to the van as a few of us were unable to join in on the ride to the site on the truck.

Once we arrived at the site, there were rows upon rows of holes that were ready for saplings to be planted in them. The holes look like they were dug with an excavator, which surprised me as I was expecting that part of the process of planting the trees was going to involve digging the holes as well. We were given a demonstration of how to plant tree saplings. The hole needed to be evened out with the loose dirt that had been sitting out in the sun, warm dirt helps kill the insects. After the hole has been leveled, the tree sapling is placed in the hole and covered with soil. Rocks are then placed around the sapling as a way to ensure water absorption. Lastly, more soil is placed on top to cover. This process will be followed for the 40,000 tree saplings that need to be planted on this site.

After watching the demonstration on how to plant the saplings, I thought it would not be too difficult. However, I was quickly surprised by how tiring it became. I was paired up with a man from the area, and we spent the day planting saplings together. There was a bit of a language barrier between us; he spoke only a little English and I only know very little Darija. Despite this, we were able to spend the day together and understand what the other person meant or needed for the most part. However, I was unable to get to know him on a more personal level. I learned that he was from the area around the site we were at, but I did not learn how he got into planting, whether his family had always been planters or if he is the only one in his family who plants.

Also, if he has another job besides planting; I could have learned about what he does in his free time. Even without being able to know him on a more personal level, I enjoyed the day we had together planted tree after tree. When we first got paired up he gave me another demonstration on how to plant the sapling, and then it was my turn to try. I was responsible for shoveling the dirt and he would pick out the rocks and the large clumps of dirt. Despite already having a pile of dirt to shovel from it was difficult to work shoveling the dirt, trying to avoid the rocks and lumps. My favorite part of the planting process was picking the rocks out and then placing them around the tree sapling. It was a gentle aspect of the tree planting day and was aesthetically pleasing.

When we were leaving the tree planting site we helped unload the rest of the saplings that we had loaded into the truck earlier in the day. Despite working for hours in the sun and leaving feeling exhausted there were still many more trees that needed to be planted. As I was sitting in the truck on my way back to the van I was physically exhausted, but I also could not stop smiling and vocalizing how happy I was, which is a feeling I don’t always get after a day in the office spent on my computer all day.

However, I also acknowledged that I would not be able to have a physically demanding job. I was worn out after only a few hours and could not imagine having to do a full eight hours of work especially under the heat. Being given the opportunity to visit a tree planting site gave me the opportunity to witness and participate in the core of what HAF is, trees.

- Triangulating Peace: How a Synagogue Can Revitalize the Jewish Identity in Interfaith Morocco, The Paradise. By Addie Simkin Photo of the Church of the Holy Martyrs and…