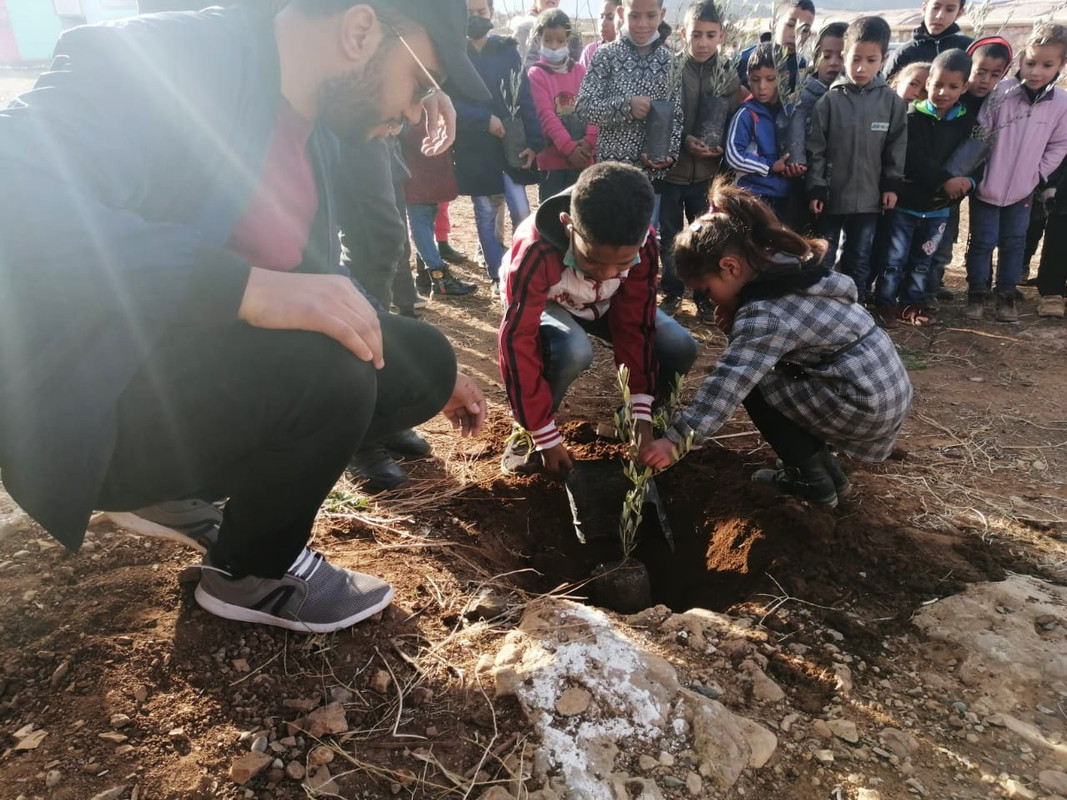 17 January 2022 — In the early morning hours, the entire team at High Atlas Foundation began to orchestrate an event that would last all day and take place from Tangier to Boujdour, from Oujda to Ouarzazate. Trees were planted at dozens of sites all over Morocco—in the ancient medinas, at primary schools, high schools, and universities, and on windswept mountainsides and in quiet valleys—everywhere, a greening of the nation.

Many locations were made possible by land lent in-kind by the Moroccan Jewish community, especially significant as the eighth annual HAF Tree Planting Day coincided with Tu Bishvat, a Jewish holiday: the New Year for the Trees. As HAF is also a U.S.-Moroccan organization, the symbolic planting of a tree at the Tangier American Legation Institute for Moroccan Studies (TALIM) and the sharing of thoughts on Martin Luther King, Jr.’s legacy by HAF President Yossef Ben-Meir reminded us that this is an American day of service in Dr. King’s honor as well. All together—it was a joyous event as people of all ages, ethnicities, and backgrounds joined in a collective effort of hope after many, many months of physical, emotional, and economic challenges.

The day’s events were viewed as a live stream on Facebook hosted by Dr. Ben-Meir as one by one the news of the day’s activities was broadcast from every corner of the nation. The first stop was a primary school in Laataouna in Tameslouhte Commune, Al Haouz Province (Marrakech-Safi), where the children eagerly got their hands in the dirt to participate. Following that, we traveled to Oujda in the northeast corner near the border to witness youth participants of the Be Green project, which is funded by Dar America and implemented by HAF, receiving an introductory workshop on how to plant trees at Maison Figuig. In both places, the faces of hope and optimism from the participants were inspiring and heartwarming. 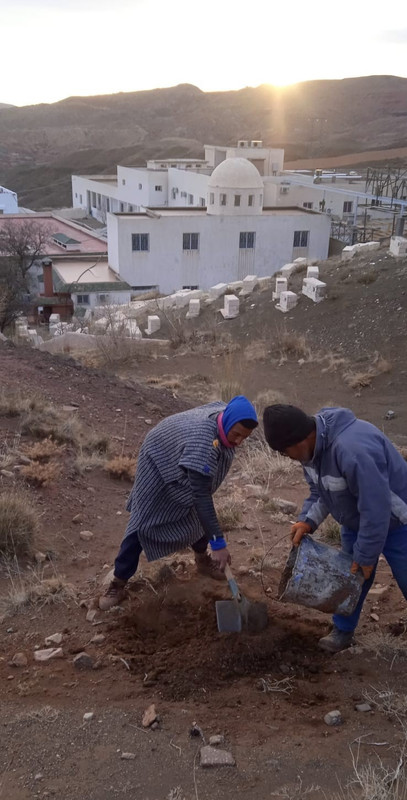 Caretakers near Agouim plant a tree within view of the tomb of Rabbi David Ou Moshe. (Photo: HAF, January 2021)

In Agouim, one of the newer nursery projects built next to the tomb of the revered Jewish healer and teacher Rabbi David Ou Moshe near Ouarzazate, we saw the caretaker of the Imerdal nursery, Mr. Ayoub, planting fruit trees as the sun shone over the mountains in a scene that could not have been more perfectly symbolic of the interfaith, intercultural heritage of Morocco. This organic fruit tree nursery was made possible with the support of His Majesty King Mohammed VI through the National Initiative for Human Development (INDH).

Dr. Ben-Meir next moved seamlessly from conversing with participants in Darija, the Moroccan Arabic language, in a remote rural setting to greeting his English-speaking colleagues in the busy city center of Tangier, where Staci Dawson, Deputy Director of Dar America, and TALIM Resident Director, Jen Rasamimanana, were on hand to celebrate our partnership with this thriving cultural and education center, the only U.S. national historic landmark located outside of the United States and its territories.

Highlights of the day also included visits to:

Towards the end of the day’s activities, a HAF team member reported that the guardian of the cemetery in Oujda and his wife invited the group to their home for tea afterwards. They spoke about what planting at the cemetery meant for them. One participant, Rabeh, remarked, “We planted life at a cemetery where life ends, we started a new cycle of life and hope, and today we plant not only a tree but hope and a symbol that all humans are alike. Regardless of our ethnicity or religion we are all humans. We come from earth and to earth we go back.”

With the close of the day, I can only express deep gratitude for the opportunity to bear witness to this extraordinary coming together of all the people. We plant trees, some, such as the walnut, that we will not live to see the fruits of but which we offer to those children yet unborn with all our love and compassion. When we come together in sincere effort with open hearts to make our world a better place, we demonstrate human resilience that cannot be felled by disease or strife or hardship. We get back up, and we set to our task with hope. 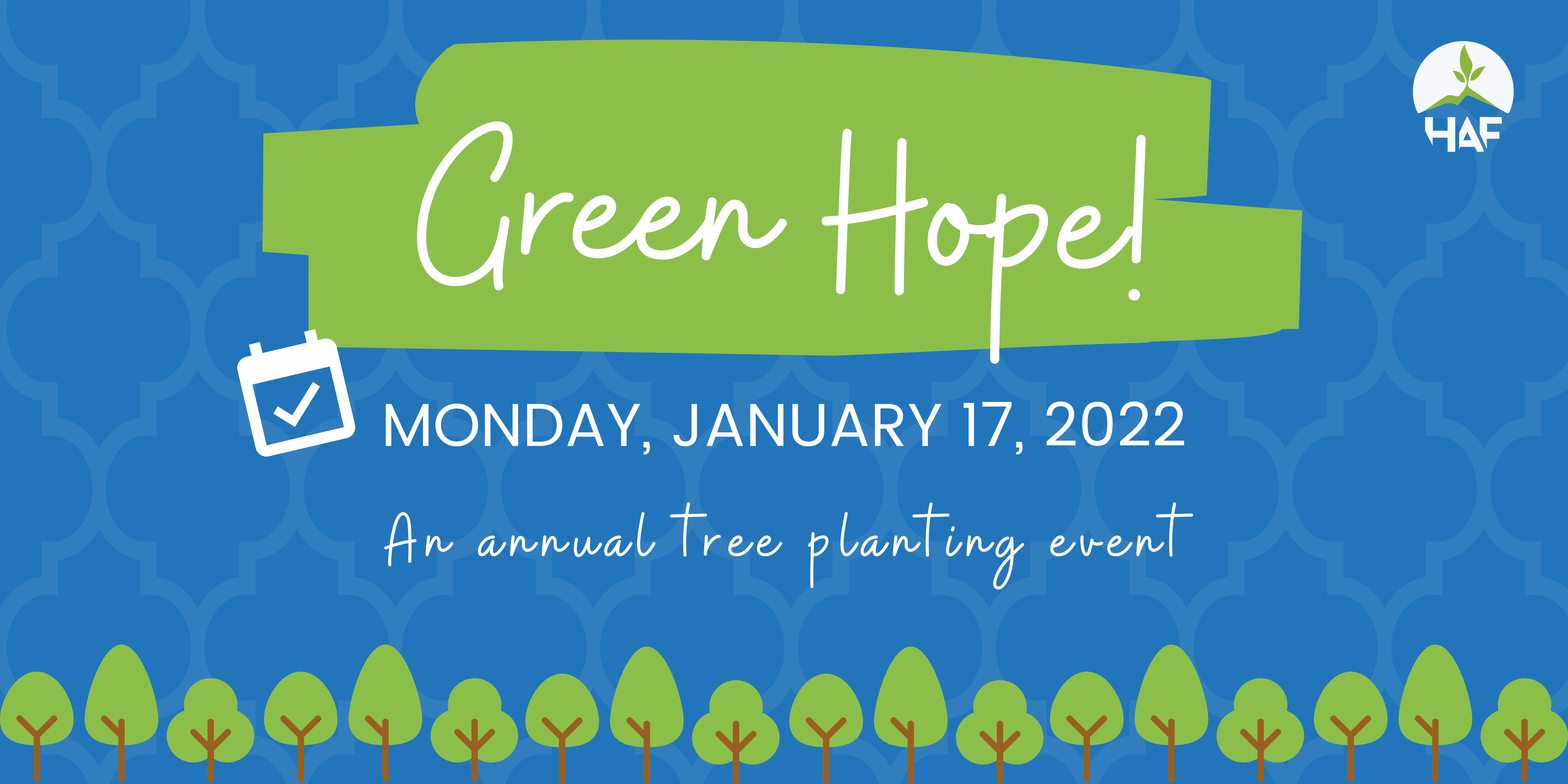 Tune in as we plant trees across Morocco. On Monday, January 17, 2022, the High Atlas Foundation team along with hundreds of people from dozens of communities across Morocco will… 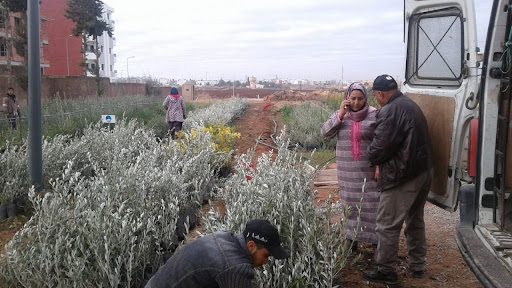 Abigail Hall HAF-UVA Intern There are three categories of benefits that come from tree planting in communities:  social, environmental, and economic. Socially, trees improve the aesthetic and environment…