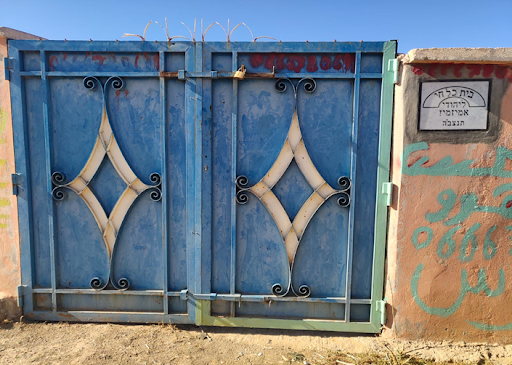 Recently joining the High Atlas Foundation (HAF) as cultural field coordinators, Oumayma and I traveled to visit the historical Jewish sites in Amizmiz of the High Atlas Mountains and its surrounding villages where the local Jewish community once thrived and co-existed with its fellow Muslim community. We traveled to Jewish cemeteries, a synagogue and a former Jewish school site. We also had the opportunity to share incredibly insightful and vibrant conversations with local elders of the villages, who shared emotional narrations of their shared memories of their Jewish neighbors.

Upon our arrival, we were welcomed by Khadija and Hamid, who had volunteered to receive us in their hometown.

Our first stop was at the old synagogue located roughly 1.5 kilometers from the taxi station. The few remnants of the synagogue stand next to the former French bar L’Cantina which is now Hotel De France. 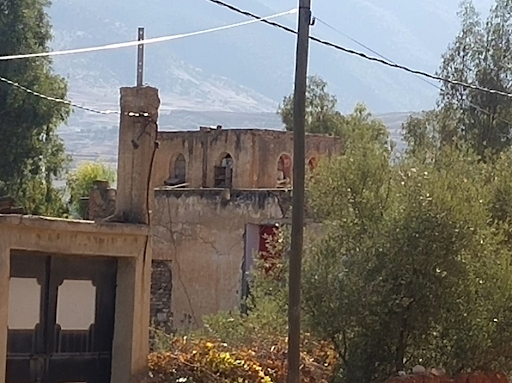 What is left of the synagogue was turned into a house and two garage shops by a local family. One of the garages reads Barbershop on its exterior.

Across the Mellah and up the mountain, we next headed towards the Jewish cemetery in Amizmiz. The relatively new and sturdy wall surrounding it is how locals distinguish it from the surrounding parcels of land. On the wall, we found the phone number for the guardian and gave him a call. The man told us that the cemetery was restored by a man named David in 2010 and that there are men who regularly come from Casablanca and Agadir to visit their ancestors’ burial sites. 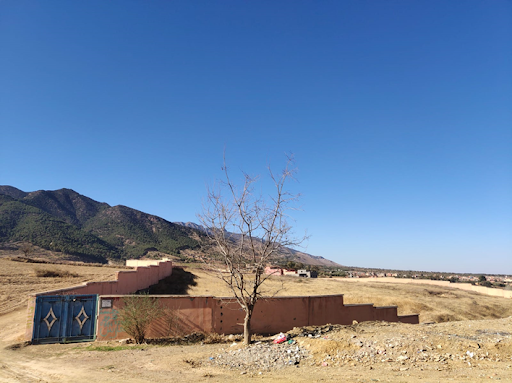 We then went back to the Jewish school, which was later turned into a space for women to learn sewing, embroidery, reading, writing, knitting, and other crafts. According to local people, what was left of the building got demolished out of fear that one day the ruins would hurt the children who made the former school their favorite soccer field and playground. Now, it is the commune’s parking lot.

In front of the parking lot, we met a local healer who recommended that we talk to the 103-year-old Muzzin of the mosque. Mr. Mohammed Mjiga started by telling us about his father, a man of Makhzen, and how the family’s financial stability deprived him of the daily encounters that his fellow Muslim friends had with the Jewish people. His father’s occupation provided them with everything they needed, therefore, they didn’t buy goods from the Jewish people. “Unlike other villagers who exchanged milk, firewood, and wheat with the Jewish people, our family had everything at its disposal thanks to my father. He was a great man. I played with Jewish kids, but our relationship ended when playtime was over.” When asked about the cultural commonalities between Jewish and Muslim people, he said “We looked the same, dressed the same, and spoke the same language, but the Jew is a Jew, and we are who we are.” 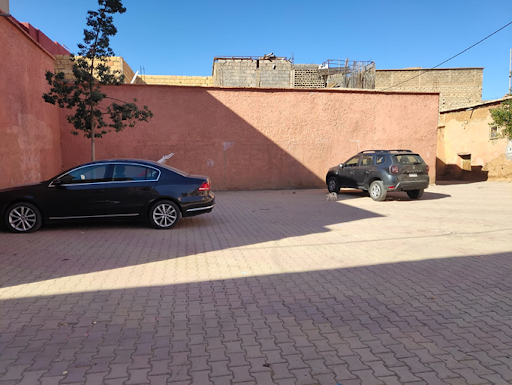 Mr. Houssa Ladib, an 80-year-old community member who saw us talking to Mr. Mohamed, volunteered to share his childhood memories with the Jewish people who lived in the village of Idnassn Amghrass. With a nostalgic sparkle in his eye and a big welcoming smile, Ladib told us about the daily encounters between Jewish and Muslim children in his village. “Among us children, there was no such thing as a Jew or Muslim. Although, we were separated at school. When Jewish classes concluded, it was the Muslim group’s turn to study…but once we were outside, we all played and caused trouble equally.”

When asked about the elders in those long ago days, Ladib said that his father had a good relationship with his Jewish counterparts. He elaborated on how his father sold firewood to Jewish people and got milk and butter in exchange for his goods. Ladib also told us about the Jewish peddlers who went from one village to another selling henna, miswak, and natural beauty products to the village women who would impatiently await the peddlers’ arrival and beg him not to “disappear” again. He added that Jewish villagers shared their savoir-faire of keg (mule-shoes), traditional saddles, and their cunning trade ways. To conclude, Mr. Ladib added: “Jewish people have always avoided clashing and fighting. Some may have seen that as cowardice, but I believe that it’s simply being peaceful.” 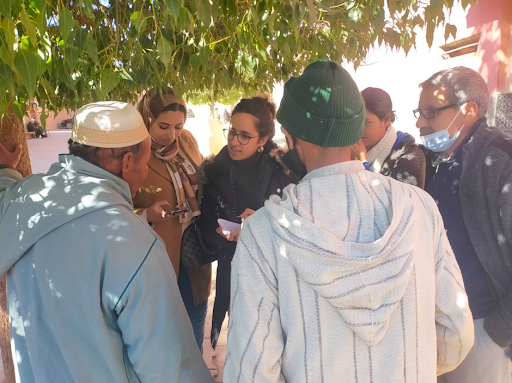 Memories of friendship and encounter

By a hanut sat three older women. We decided to approach and ask about their memories of the Jewish people in Amizmiz. Lhajja Fadma Ta’aidat, who insisted that we mention her name, is over 100 years old. She vividly recalled how she thrived economically with the daughters and sons of the biggest Jewish families in Amizmiz, mentioning Massoud and Bihi (Abraham) of the Ait Taqqort family. Lalla Ta’aidat proudly talked about how she was the only female sales representative of the aforementioned family, known for their trading in fine tissues.

Lalla Ta’aidat explained that this kind of trade allowed for her to enter the homes of both Jewish and Muslim families and therefore network with the daughters of Merchant Swissou: Raheel, Aalia, and M’ssbra. Lalla Ta’aidat told us more about the festivities, Jewish holidays, and Caidal parties. She recalled that her Jewish friends prayed on Saturday, and that for the whole day, they fasted and continued praying. “They would put a black rope on their arm (Tefillin), hold a stick on the other hand, and recite their prayers. They sounded the same as Muslims. They also ate Tannurt (local stone baked bread), but they did not put salt in theirs.”

Lalla Ta’aidat hummed songs that the Jewish women used to sing to the Caid during special occasions. She kept repeating Trebhu hna w’iyyakum (“May we and you always win”) and insisted that this was a saying that Jewish people constantly repeated. A sudden change occurred on the woman’s face as she moved on to tell us about the departure of her neighbors. She said “They left at night. A bus came for them late at night. They took them. It is true that I helped some of them sell their property, and the others to pack their clothes, but they left at the dead of night. Trebhu hna w’iyyakum.”

Our last stop was at the Jewish cemetery in Ait Sliman village, Tizguin. Rachid, a local man who volunteers to clean the road from rocks and bushes, suggested he lead the way and show us the cemetery. Although he has no memories of the Jewish people who lived in his village, Rachid is aware of the importance of preserving the history of the place. As he passes by the cemetery daily, he makes sure its door is closed and the people lying there are not disturbed. Upon entering the walled cemetery, we noticed two newly dug graves. Rachid explained that some people came back to take their ancestors’ relics.

Our trip to Amizmiz was filled with informative and emotional encounters. The local people in Amizmiz still recall their Jewish neighbors with a combination of nostalgia and ambiguity. It is critical that the young generation be taught about their local histories and learn that their villages were once enriching spaces of experience and plurality. Ta’aidat’s grandchild, who stood watching us interview his grandmother, was perplexed as it was his first time witnessing her revisit memories of joy, economic activity, music, and friendship with “the Jews,” a word that seemed to as of yet hold little significance to the ten-year-old boy.

Ikbale Bouziane is a Cultural Field Coordinator for the High Atlas Foundation in Morocco.

This article was produced with the support of the United States Agency for International Development (USAID) Religious and Ethnic Minorities Activity, and the High Atlas Foundation is solely responsible for content, which does not necessarily reflect the views of USAID or the United States government. 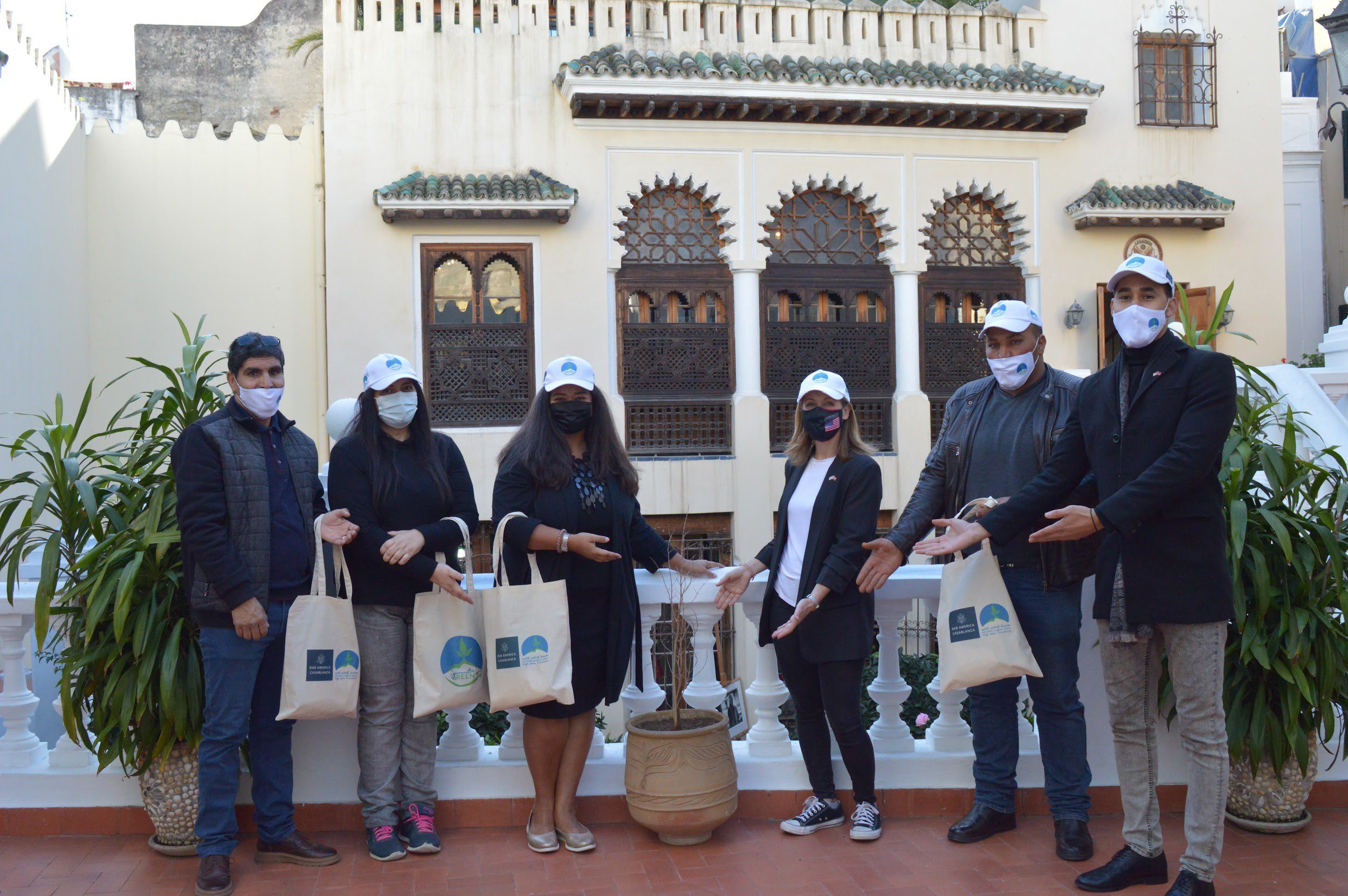 By Soukaina Kherdioui, HAF Field Coordinator Based on the teachings of all Abrahamic religions, humans are entrusted with the safeguarding of mother nature’s multiple components. Trees, in particular,… 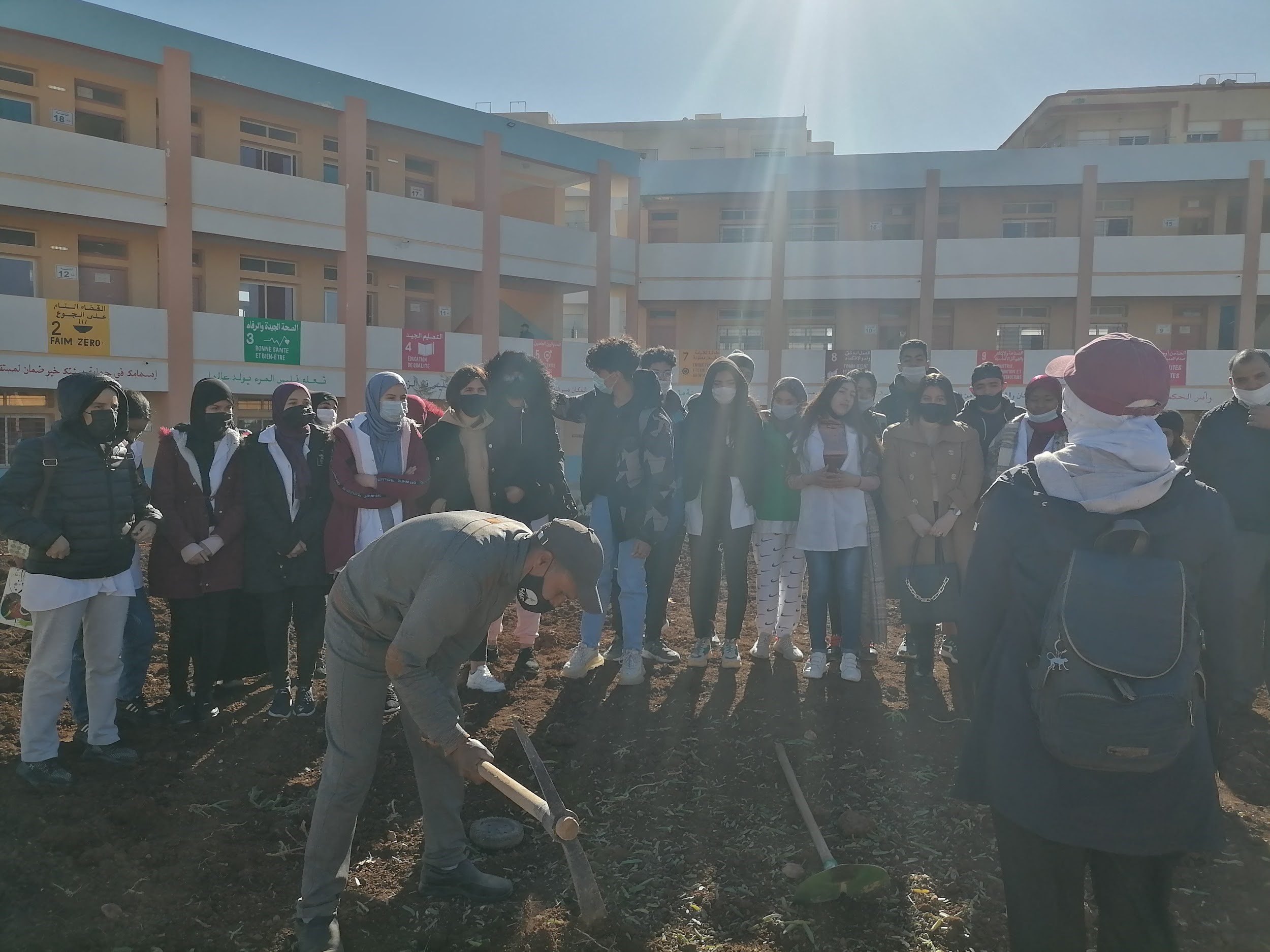 When nature and culture converge