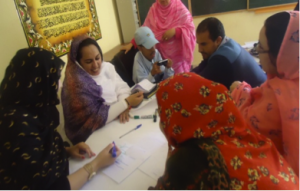 I have frequently been asked to provide trainings by social agents that I meet from time to time in the streets of Boujdour city. Sometimes I received calls from them urging me to fix time for a new community meeting and to keep them informed of that.

The people I meet hope to benefit from HAF’s participatory development workshops. Recently, some local associations of Boujdour such as Rawabit, invited the me, as HAF’s site manager to lead a training.

In respond to these repetitive urgent requests, the HAF didn’t hesitate to accept the Rawabit’s invitation to train the local people about participatory development techniques. Rawabit is a new local association for Social Works, Environment and Development, which began four months ago, but is nonetheless a very active association. The HAF accepted this invitation from Rawabit to cooperate together so as to benefit around 21 associations and coops, social agents of Boujdour Province who seems to be in need for such initiatives. Since coming back to Boujdour, the HAF is always ready to be assist or partner with development agencies, either governmental or nongovernmental, whenever asking for that. So, After two days of coordination and contact between Rawabit board members and HAF’s Boujdour site manager, we finally planned to provide two day training on Saturday and Sunday, March 23and 24,2013 from 9:00 am to 4:00pm.The two parties agreed that Rawabit would find a place for training and coordinate with social agents, whereas HAF would provide training and food for them.

Saturday, March 23 was the first day, at the Center 2 of Education and Profession in the City of Boujdour. When I arrived, I found Hanna Ezzaoui, the president of Rawabit with only three women wearing colored, elegant mlahf with make up and watches stack to their wrists sitting at a large room, this latter which was full of chairs and tables, well arranged and forming a circle around the room’s borders. By 9:30 am, we were still waiting for the people to enter the room. Slowly, people began to fill the room. If a man entered, he said “salam ulaikum” and sat down, if a woman entered, she said: “salam ualaikum” shacked cheeks and hands with us smiled and then sat down. After two hours of waiting, we began the training at 11:00am instead of 9:00am.

The first thing I observed was that the social agents were not used to benefit from such workshops where 98% of the time was given to them to participate, communicate, argue, , disagree, debate, agree, design, plan, decide and evaluate. At the beginning, they expected me to use a data show with laptop or to give them a lot of lectures and theoretical information, they waited for me to talk, but I was just listening instead.

Some of the participants, especially those who didn’t attend the community meeting of December, were very enthusiastic about the workshop’s dynamic activities in which the groups interact between each other as if it were the first time they get to know themselves, as it were the first time they introduced to their geographical region or natural and social surroundings. One of the participants said “ I was born in Boujdour Province, and I lived here for more than 25 years. And I’ve never been to Galtat Zammour and I know nothing about the place, but only today I discovered this rural commune as part of my birthplace, thanks to HAF’s training workshops”.

The HAF’s participatory method was successfully applied in different fields of the northern parts of Morocco, where HAF’s field team continues to encourage disadvantaged people to participate in their local development. It is the first time this method has been applied in the south of the country. I was not very surprised in the second day of training when I was questioned by an attendee: “ Why are you here particularly in Boujdour?”

I was happy to hear that question for it had been a great chance to clarify HAF’s goal in Boujdour. I replied quite simply that we are here to transfer leadership and development skills to the Boujdour communities, for they are the leaders of their community development. We are here to support and apply the participatory approach as a proactive ambitious tool to reach human development, not only in Boujdour, but in the whole of Morocco. We are here to create an opportunity to talk about dreams and suggestions, which will become ideas and projects in the future for the sake of their better lives and social development. We are here to listen to their needs and their aspirational expectations. We are here simply to train them if they would like to or if they are still in need of our help. Then a social agent interrupted me to say that they are very grateful to me and to the organization who sent me from Marrakech to reach them in this very far place. He assured me that the people of Boujdour would like to be trained and empowered to improve their methods and ways of working. “Why not having more training sessions like these?” He suggested addressing his colleagues at the room.

The beautiful thing in these two days training was that the social agents had expressed openly and sincerely the lessons they learned at the end of the session. The following are some of their statements: