The Role of Women in Mimouna: A Moroccan-Jewish Celebration of Creation and Cultural Diversity On Tuesday, April 6, the Mimouna Association hosted a virtual event titled “Celebrating Mimouna: From a Feminine Perspective.” The Mimouna Association is a non-profit founded in 2007 by Muslim students aiming to promote and preserve Morocco’s Jewish heritage and reclaim the cultural diversity of Morocco. The April 6th event is an example of one of the organization’s efforts to engage and educate youth about Moroccan-Jewish heritage.

Mimouna itself is a unique tradition in Morocco which is a result of its rich cultural heritage. On the last night of Passover, Jewish families in Morocco invite their non-Jewish neighbors into their homes for a large celebration. Traditionally, the neighbors bring bread, butter, and other foods that are forbidden during the week of Passover. In this way, the non-Jewish neighbors help the Jewish families readjust and reintegrate back into regular life. Mimouna is a shared celebration of prosperity, fertility, the coming of spring, and the growth of new life between people of different faiths and backgrounds, a powerful symbol of Morocco’s cultural diversity.

There are many theories about the origin of the word “mimouna”, which remind us of Morocco’s rich multiplicity of cultures and faiths. “Mimouna” may come from an old Hebrew word for money or an Arabic word for faith. It may also be linked etymologically to the Jewish philosopher Maimonides or to the name of a Berber goddess.

At the virtual event, the Mimouna Association showed a brief video created by Moroccan-Jewish singers Suzanne Harroch and Maxime Karoutchi on the Mimouna celebration. Afterwards, the organization invited Dr. Vanessa Paloma Elbaz, a singer and researcher of Moroccan-Jewish heritage at the University of Cambridge, to speak about the unique and vital role of women in Mimouna. Dr. Elbaz discussed how the Mimouna celebration emphasizes women’s role as creators. This begins with the creation of a space for social and cultural exchange on the night of the Mimouna. The eight days of Passover are celebrated within the closed, private space of the home with only the family, but on the last night – the night of Mimouna – the door is opened to outside guests and neighbors. Traditionally, women were confined to the private space of the home and would only see their neighbors from the terraces of their houses or when they would go outside to fetch water. However, on the night of Mimouna, the women would invite their neighbors inside of the home, creating a new, sacred, celebratory space of “porosity” and exchange.

The food, traditionally prepared by the woman, also symbolizes creativity, prosperity, fertility, and the creation of new life. The woman of the house often makes a sponge from flour and yeast, representing creativity and growth, that would serve as the starter to make bread and create sustenance throughout the entire year. Moreover, in many households, the woman will lay out an uncooked fish on the table as a symbol of fertility, a cup of oil with five coins to represent prosperity, and a bowl containing five fava bean stalks and five eggs to symbolize fertility, new life, and new growth. The woman traditionally feeds each guest lettuce dipped in honey, wishing them a sweet year to come, and sometimes the woman will put her hand in flour and stamp each guest’s shirt as they walk out, imprinting them symbolically with this spirit of creativity, creation, and prosperity.

Mimouna is a beautiful tradition that illustrates creation and the cultural diversity of Morocco. At the end of her discussion, Dr. Elbaz underscored the importance of passing down the unique tradition to younger generations. She emphasized the need to educate Moroccan youth on the practices, recipes, and music associated with Mimouna in the hopes that this custom will continue for generations to come. Her presentation at the Mimouna Association’s event was an important step to spread knowledge and appreciation of Mimouna and the rich Jewish heritage that lives on in Morocco. 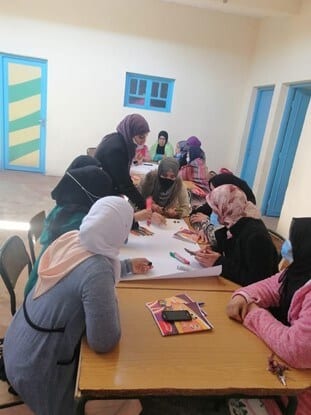