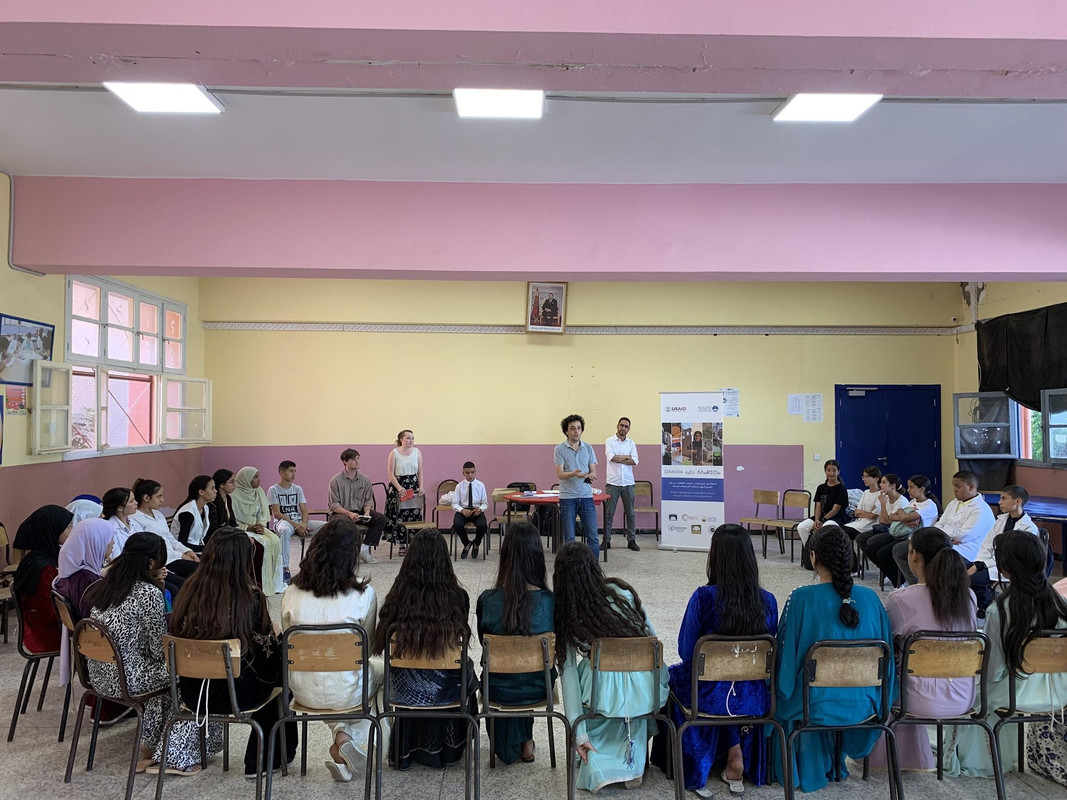 There was a holiday atmosphere at Al Mansour Eddahbi Middle School when the HAF team arrived on the 26th of May, 2022. Children were arranging display tables in the shade of the cloister; the eighth grade girls were just beginning to emerge from their dorms in multicolored kaftans; the schoolchildren’s elected representative, a little boy, was running back-and-forth across the courtyard in his suit, giving orders in his walkie talkie; and the physics teacher, whose figure seemed to tower towards the sun, stood watching the commotion with satisfaction. The anticipation and excitement was so thick that I could practically scoop it out of the air and bottle it. There was going to be a big celebration that evening: the one hundredth anniversary of the school.

I came to help the HAF Dakira program experts conduct an activity on the history and cultural patrimony of Morocco, a theme the school was celebrating for its anniversary. The activity involved gathering sixty students for a pre-test, a discussion, and a post-test, though because the kids were shy, we also conducted an icebreaker where everyone introduced their name and a fun fact. Afterwards, there were still a couple hours before the celebration, and the kids were allowed to ask questions and chat with Mary-Grace and me, the two University of Virginia interns. The kids were extremely curious about my hometown, my dog, and what I thought about Morocco, but they were even more interested in teaching me Darija. As students responsible for communicating in French, Darija, and FusHa at school, and sometimes Amazigh and English at home, they turned-out to be natural teachers. Surrounded by thirty schoolchildren who all wanted to be ambassadors of their country, I soon learned the right way to say too many words to remember.

Then, we joined everyone at the assembly hall to hear alumni speak about its history. It was founded one hundred years ago as a Jewish school, but it opened its doors to any Moroccan. These men and women spoke passionately about their days here, and how grateful they felt to the Jewish community for their role in empowering  the entire neighborhood. Yet while grateful for the opportunities they were afforded by this school, the alumni were most proud to speak about the Jewish history of Morocco, about new bridges being built between Morocco and Israel and the USA, about the power of interfaith dialogue, and how the school itself stands as a symbol for the patrimony between all Moroccans. After a brief speech from the director of the school, everyone went outside for the celebration.

Outside, there were presentations from the robotics club, Moroccan desserts prepared by an alumna, a family life club, a glass-making club, and an electronics club. I was especially impressed by the students’ pride in learning  about Moroccan culture — plants from many climates across Morocco were grown by the ecology club as an exercise in respecting  the cultures and practices that correspond with these regions; even the kaftan worn by the eighth grade girls were representative of each region. While schoolkids, HAF workers, teachers, alumni, and government officials all congregated in the courtyard, I lingered under the shadow of the cloister, exhausted from the long day. There, the president of HAF, Dr. Ben-Meir, stood lost in thought. We were speaking about the clubs and the speeches and especially the desserts when music suddenly began to play, and all the kids gathered to dance in a circle whose circumference was bound only by the limits of the courtyard. I listened without speaking. Dr. Ben-Meir’s face lit up, almost as if a golden light had dawned on him.

“It’s a Moroccan-Jewish song,” he said, speaking not necessarily for my sake, but out of some impulse. “It’s a traditional song, centuries-old, and they’re celebrating the school’s anniversary with this.”

We stood and listened. Then he continued, “Instead of focusing on the present, they’re honoring the past. Not even the schoolchildren have forgotten.”

Then, Dr. Ben-Meir smiled. The first shivers of dance were working up his body. Clapping to the beat of a song written generations ago, he left the shadows of the cloister and joined the circle.

Ryan Winegardner, UVa/HAF student-intern When the High Atlas Foundation (HAF) team took the University of Virginia interns to Akrich, it was the first time we had left the…