As part of the celebration for International Women’s Day, the Amis du Judaïsme Marocain Association (AAJM) and Lorin Foundation launched the first edition of the Jewish Days of Tangier. The event, which was held on March 10-12, was aimed at celebrating Tangier as a cosmopolitan city and the crossroads of various faiths and ethnicities. It was also an opportunity to promote interfaith and intercultural dialogues among younger Moroccans by revisiting and reviving the shared history of Jewish and Muslim communities in Morocco.

This year’s edition was dedicated to celebrating women and kicked off with a conference on the status of women in Moroccan Jewish and Islamic traditions. On the second day, the program included a guided tour in the old medina of Tangier as well as a visit to ancient Jewish Moroccan historical sites, such as the Moshe Nahon synagogue and the Jewish cemetery. The guests also had the chance to attend the screening of Younes Laghrari’s film “Moroccan Jews: Destinies Undone,” a documentary that features several testimonies on Jewish-Moroccan relations and explores the reasons Jewish Moroccans left their homeland in the 1960s. 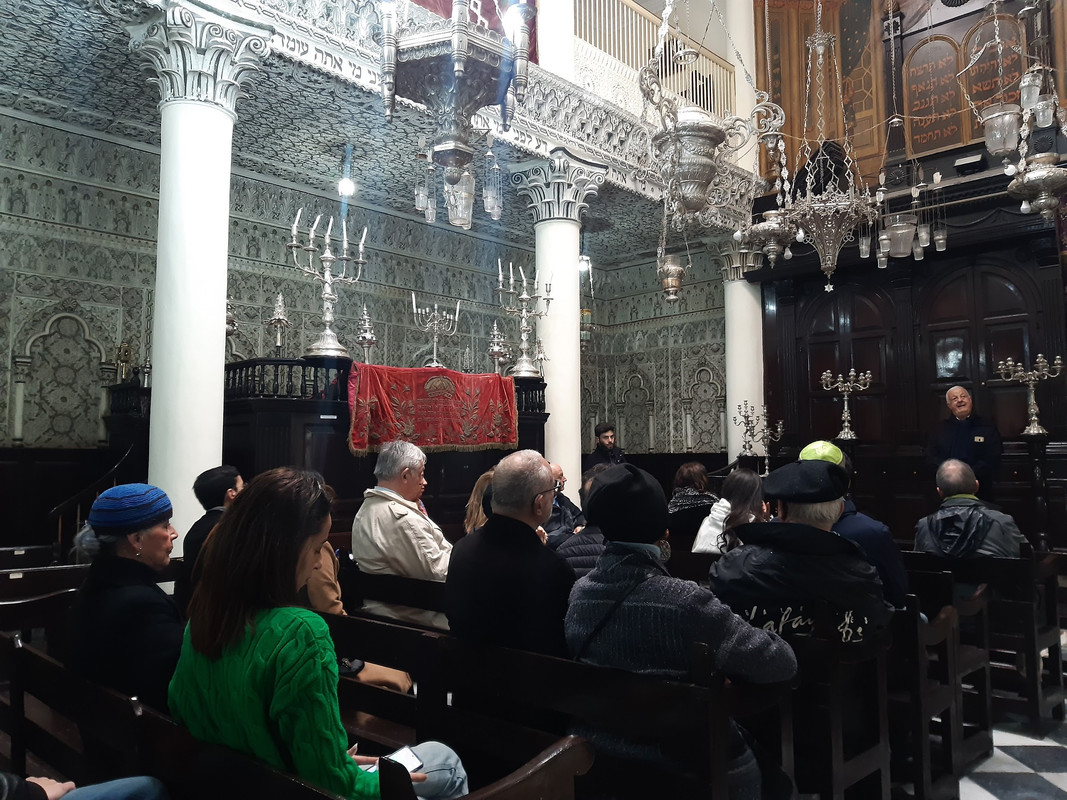 Mr. Andre Gomel explaining the practices and beliefs of Judaism during a visit to Moshe Nahon Synagogue in the old Medina of Tangier. March 2022. Photo: Soukaina Kherdioui/ HAF

As a member of the HAF Dakira team, I was delighted to attend a Shabbat lunch for the first time in my life. The reception was held at the Jewish hospice in Tangier. The gathering started with the recital of a blessing over the Challah bread followed by Dafina or Skinha’, a quintessential Jewish Moroccan dish traditionally served on Shabbat. The experience was made even more special when a Jewish Moroccan couple, with whom I shared the lunch table, recalled stories from their childhood and started reminiscing about the past. “I remember when I was little and my mother’s Muslim neighbors used to prepare the Dafina and bring it to our home on Saturday. My mother did the same in Eid el-Fitr; she used to prepare various treats and send them to our neighbors,” said Esther Ohana, smiling. 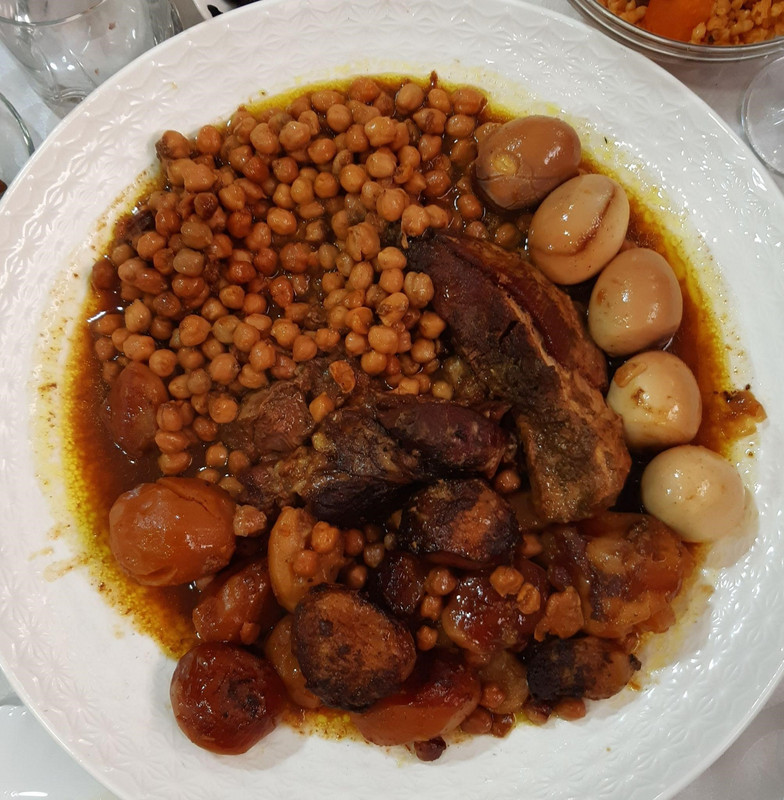 The event concluded with a Jewish-Andalusian concert during which Lala Tamar, a Brazilian singer of Moroccan origins, and Anas Belhachmi performed ancient female Jewish songs in Arabic, Hebrew, and Haketia. The performance was accompanied by an exhibition of the Berberisca’, a traditional dress worn by Moroccan Jewish brides. Mrs. Sonia Azagury Cohen, who is in charge of the preservation of the Jewish heritage of Tangier and a dedicated collector of these dresses, gave an in depth overview of the different elements that make up the gowns and their representation. According to her, a bride dressed in the Berberisca bears a strong resemblance to the Torah as the skirt making up the gown is made of the same material from which Torah mantles are fabricated. In addition, the skirt wraps around the body in the same manner as a Torah scroll and the embroidery symbolizes Jewish beliefs and traditions. Thus, the Berberisca functions as an encoded message and a carrier of Jewish heritage. 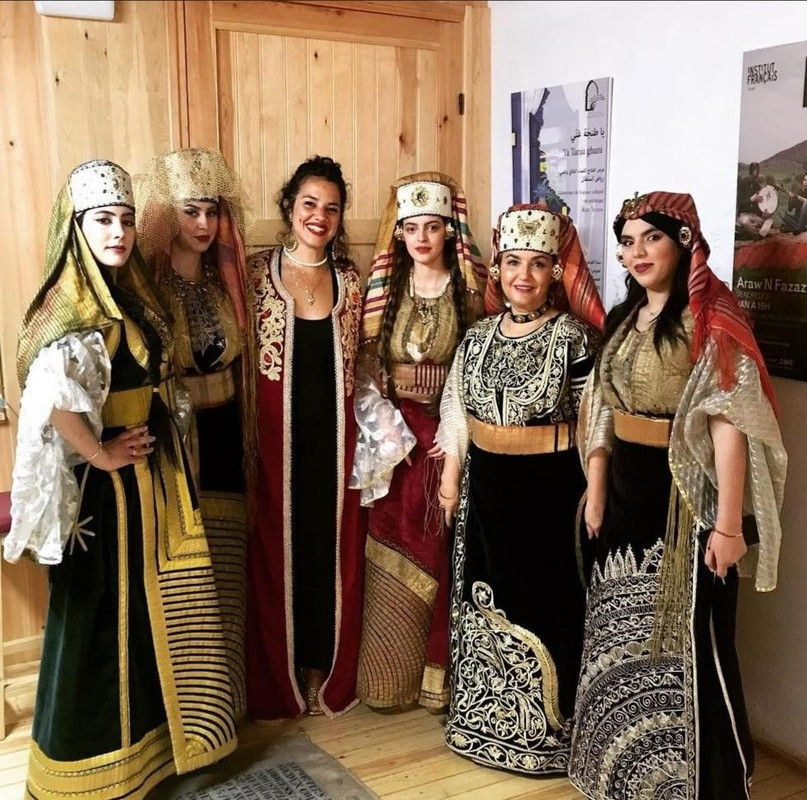 An exhibition of Berberiscas that date back to the 19th century. The collection belongs to Mrs. Sonia Azagury who is in charge of the preservation of the Jewish heritage in Tangier. March 2022. Photo: Lala Tamar

The Jewish Days of Tangier were full of moments of exchange and knowledge transfer and offered the opportunity to rediscover Morocco’s multicultural and interreligious heritage. Such encounters encapsulate the values of coexistence and inclusiveness that the Dakira program promotes through its various activities.

Soukaina Kherdioui is a cultural coordinator for the USAID Dakira program and is currently based in Rabat. Dakira, implemented by the High Atlas Foundation and its partners, aims to strengthen inter-religious and inter-ethnic solidarity through community efforts that preserve cultural heritage in Morocco.

This article was completed with the support of the United States Agency for International Development (USAID) Dakira program, and the High Atlas Foundation is solely responsible for its content, which does not necessarily reflect the views of the USAID or the Government of the United States.