The Importance of Plants in Religious Art 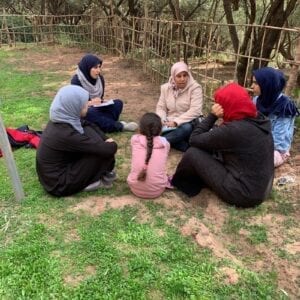 MARRAKECH, Morocco — What is the message conveyed by the representation of plants in religious text? What do the images that these references bring to our minds tell us about a people and a society? These are questions posed by award-winning artist and author Gloria Abella Ballen, whose book Garden of Eden: Plants of the Hebrew Bible was the subject of a recent webinar sponsored by the American Sephardic Federation.

Born in Bogota, Colombia, Abella Ballen grew up in a Spanish Jewish family of artists and anthropologists. She has made a career of artistic expression influenced by her international travels and residences, including Morocco, and her study of Sephardic illuminated texts. Her 2015 book The Power of the Hebrew Alphabet leads the reader through visual expressions of the alphabet’s 22 letters, blending art, symbolism, and religious spirituality. That book, prepared through research in the libraries at Oxford and in the U.S., Israel, and Spain, has received multiple awards for its fusion of art and religious symbolism.

In Abella Ballen’s latest work, she examines the literal and allegorical role of plants as referenced in the Hebrew bible that appear not only in the text but in the vegetation depicted in its art and in the architecture of its religious sites. We find, for example, red and green leaves and flowers adorning the Torah niche of the 14th century Samuel Halevi Abulafia synagogue (El Tránsito) in Toledo, Spain, in a style similar to the nearby Islamic buildings constructed before the Muslim and Jewish expulsions. The 15th century’s last example of a Hebrew bible out of Iberia—the Coruña, or Kennicott, text—was lavishly decorated by artist Joseph Ibn Hayyim with representations of tiny flowers, trees and fruit.

The plants that are prevalent in the Middle East, the Mediterranean, and the Maghreb make appearances in the religious texts of the three Abrahamic faiths, and, through this, even the Jews, Christians, and Muslims not from those regions have become familiar with the fig, the date, and the pomegranate, with saffron, cinnamon, and cedar. Their references in the texts serve not only as narrative context but as allegorical symbols.

Fig trees are mentioned frequently, as Abella Ballen pointed out, in practical terms as a food to sustain the people, and as a symbol of health, faithfulness and blessings. “So Judah and Israel lived securely, everyone under his vine and his fig tree, from Dan even to Beersheba, all the days of Solomon” (Kings 4:25). In her book, the author has a section dedicated to the fig, having drawn it in all its full, round, succulence, accompanied by its Latin, English, and Hebrew names as well as several verses in which it is mentioned. She remarked during the presentation that she wants the reader to “enter the field and feel the fruit’s fragrance.”

Figs are among the variety of plants that are grown in the nurseries of the High Atlas Foundation in its fruit tree campaign to improve the lives of Moroccan farming families. Millions of seeds have been planted, primarily funded by Ecosia, the German social enterprise. Capacity-building for those seeking to transition from subsistence farming of corn and barley to fruits like figs, carob, and pomegranate has come through the expertise of volunteers from the USAID Farmer-to-Farmer program in visits to more than 80 cooperatives in three provinces.

The High Atlas Foundation is also launching a new project in 2021 with funding from USAID to preserve the memories and sites of Morocco’s interfaith past. Elder Muslim citizens who remember the time before the formation of Israel when thousands of Moroccan Jews lived side-by-side with them will tell their stories and these will be captured, digitized, archived, and shared with today’s Moroccan youth, who know little of that history if at all. HAF will honor and memorialize the sites where Moroccan Jews lived, worked, and worshipped, and create opportunities for participatory community development that recognizes and celebrates the nation’s rich, diverse culture. Preserving Moroccan Christian history will be part of the project, too.

The recognition of Morocco’s interfaith history and its intercultural significance are tied to the trees and plants. A number of HAF’s nurseries have been built on land lent in-kind by Morocco’s Jewish community, on property adjacent to Jewish cemeteries. While the families of those buried there are mostly long-gone in the great post-World-War II diaspora, their graves are lovingly tended by Muslim caretakers who understand their importance. From this land, fruit tree seeds of cherry, lemon, pomegranate and more, have been planted in the millions, tended with care to become saplings that help farming families improve their economic and social status. As the people of the Abrahamic faiths are inextricably bound by their common beliefs, so are the land, the plants, and the people of Morocco.

“Let us go early to the vineyards to see if the vines have budded, if their blossoms have opened, and if the pomegranates are in bloom” (Song of Songs 7:12-13). Pomegranates are a symbol of life, fertility, love, and beauty, with a diverse cultural-religious significance. We see them through the Mediterranean and North African cultures even in the embroidery on the hems of clerical vestments or in the hands of the infant Jesus in Botticelli’s Madonna of the pomegranate. The Qur’an mentions the fruit as a sign of Allah’s blessings, whether as an actual fruit with healing properties or as a representation of Paradise. As Abella Ballen stated, “The Bible is like an orchard; the Torah is a paradise. When we think of the Garden of Eden, it is tranquil, colorful, and these colors come naturally, unconsciously in my art.”

The author explains that she wants readers to have a feeling of the smell and taste of the object when they look at the pictures, such as those of myrrh, garlic, and cedar. Cedar is a symbol of strength and durability, as in this verse promising not to forsake the poor and needy: “I will put in the desert the cedar and the acacia, the myrtle and the olive. I will set junipers in the wasteland, the fir and the cypress together” (Isaiah 41:19). Morocco’s High Atlas Mountains provide incredible biodiversity, with cedars, oaks, and all kinds of plants growing there, as well as the olive and carob trees grown and managed through HAF’s programs.

The art comes from the texts and from Earth’s bounty, and the vegetation brings life and sustenance to the people, literally and spiritually.

Ellen Hernandez teaches English at Camden County College, based in Blackwood, New Jersey.  She is a freelance writer and a volunteer with the High Atlas Foundation. 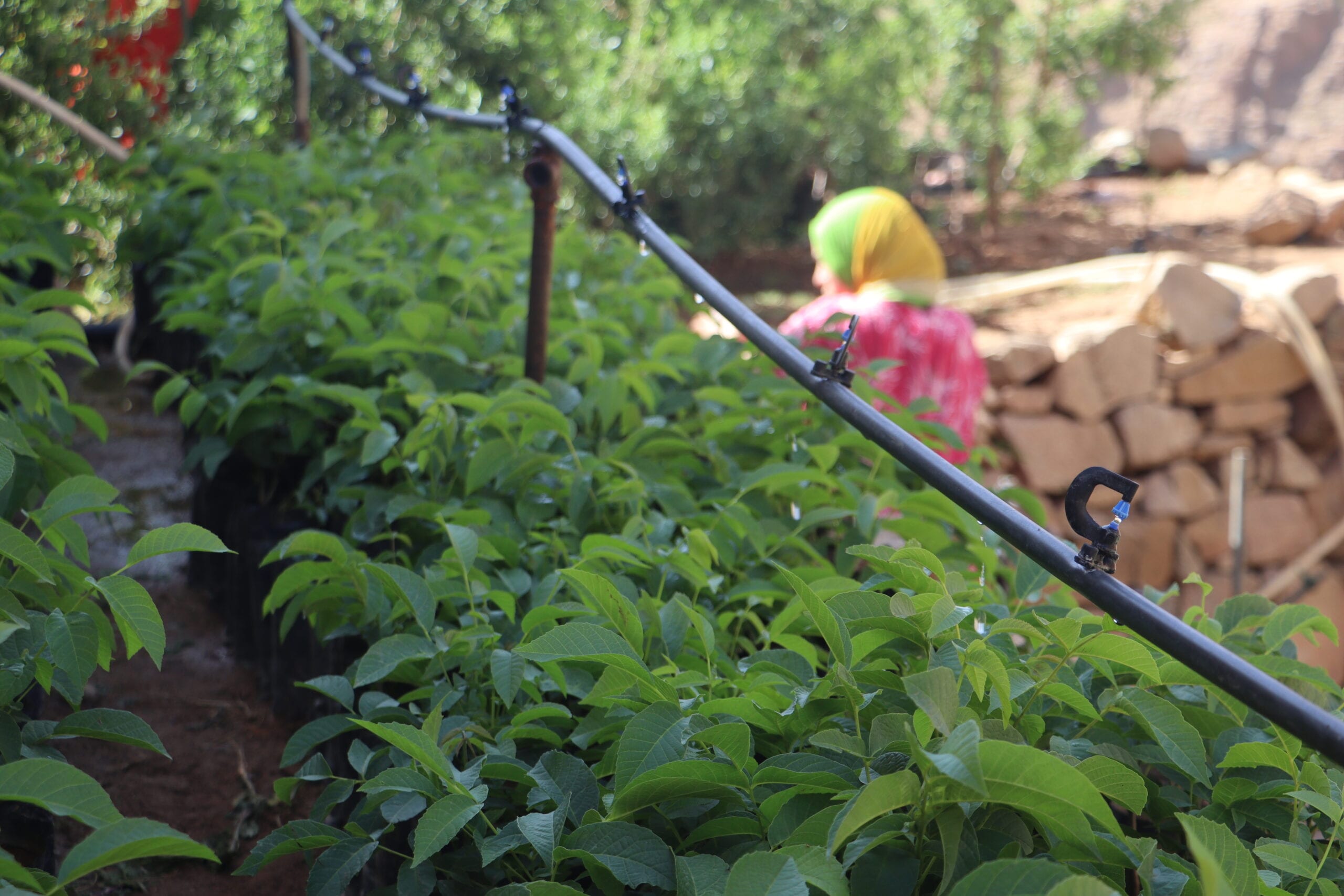 By Jasiah Hasan In the past fifty years, Morocco’s population has nearly tripled. Mass migrations and urbanization have pushed more than half of the growing population into cities,… 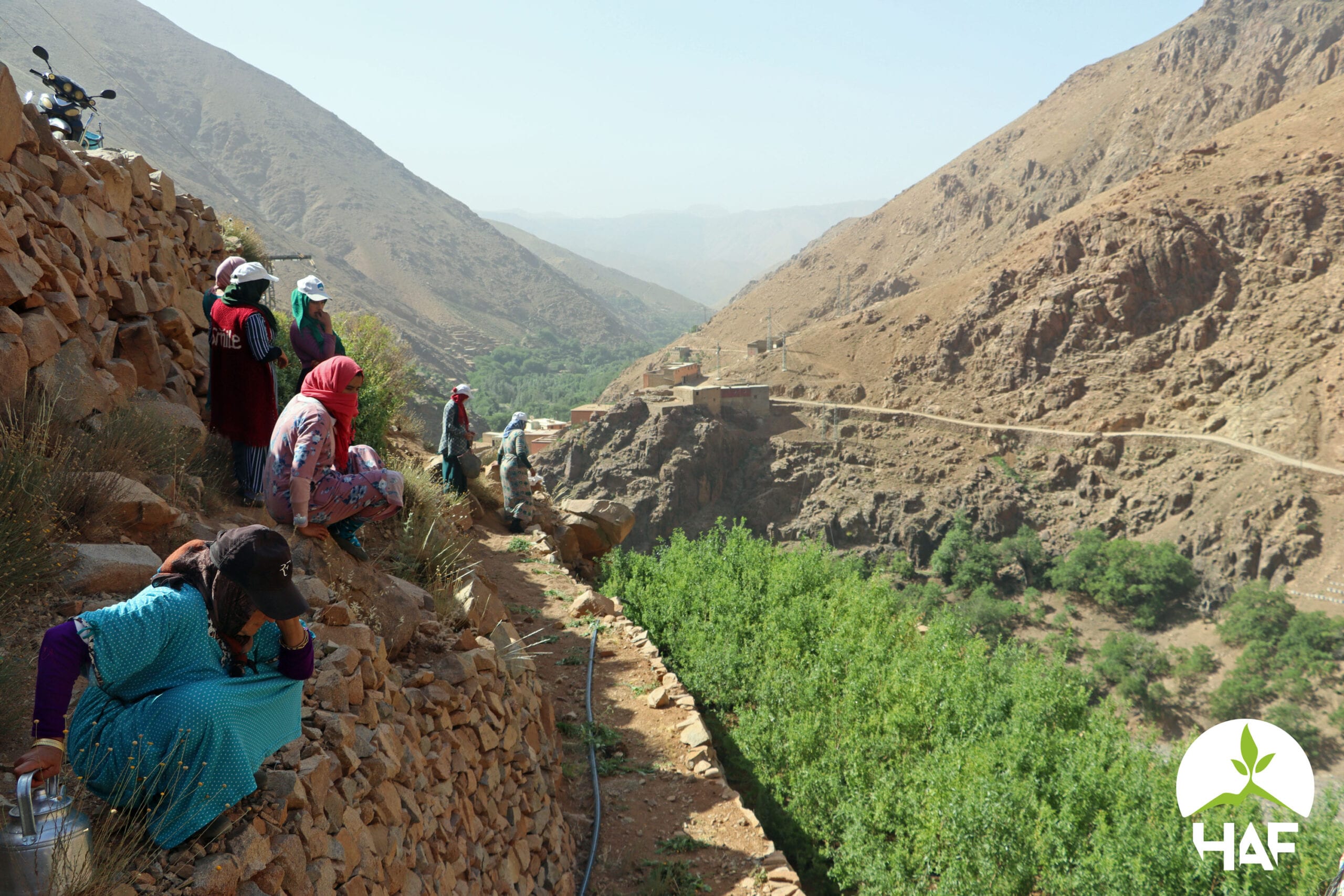