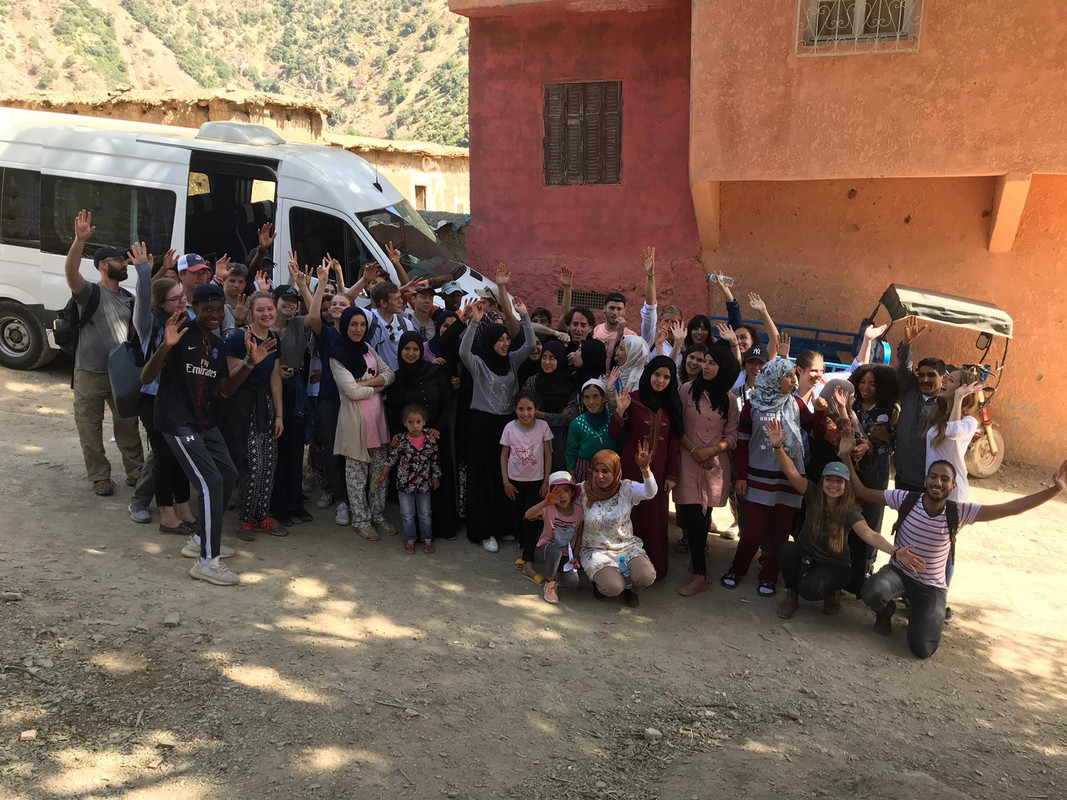 The rendezvous point was the HAF office. I came early and got to meet the whole team. There were two groups: UVA Students who are in Morocco on a research program and with whom I shared a bus, and the Envoys, high schoolers who were on a school trip. As a Moroccan volunteer, I was surprised to see that all my teammates were foreign students. Yet, they were lively and friendly. We departed at 9 O’clock, it took us about two hours full of excitement to get to our destination “Tassa Ouirgane”, with a 20-minute stop in the village “Asni”.

Upon arriving, we passed by a little abandoned house that happened to be Mr. Yossef’s old residence for three months in his first days in Morocco. The place where everything began. I couldn’t even bring myself to express the 25 years of nostalgia I felt from back then! 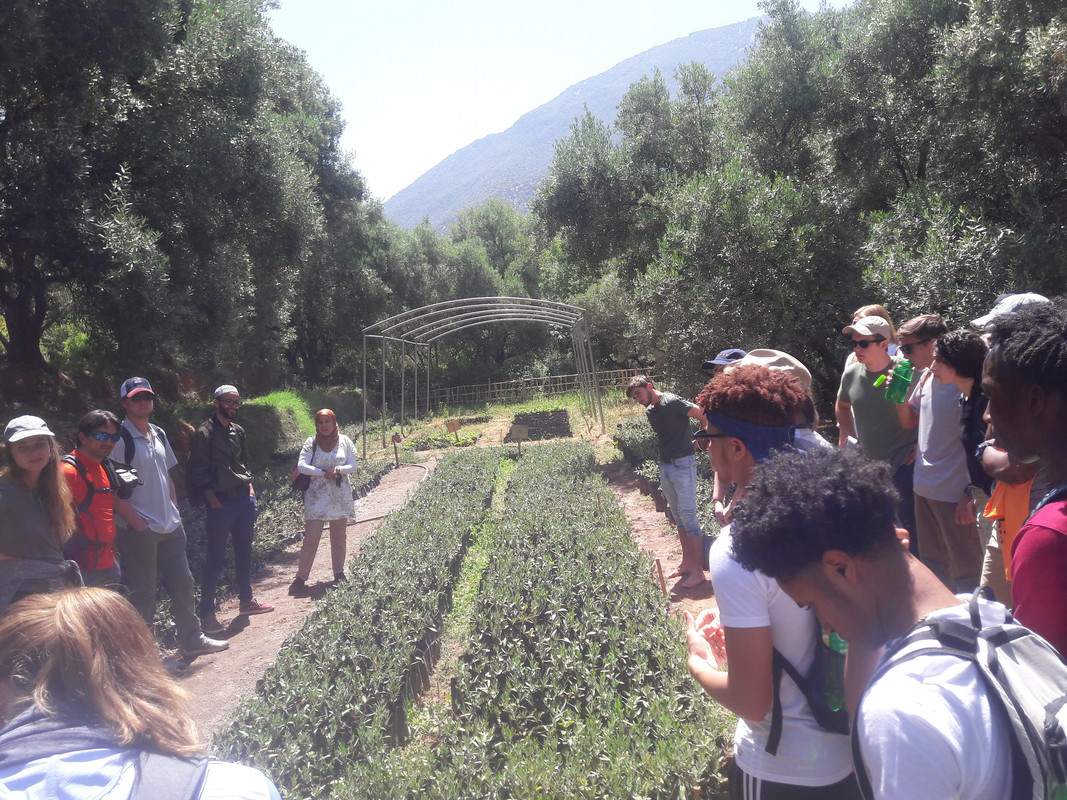 We were greeted by a member of the Tassa Ouirgane association who served as our guide. The first stop was a tree nursery where we circled hundreds of little trees waiting for their buyers. Normally one wouldn’t see olive trees in this kind of region, it was shocking to see the cool climate peaches and the heat loving olives trees on the same plantation! It obviously took a lot of effort to maintain, especially in dry weather. We students had the freedom to ask the guide about his work. The 29-year-old was unmarried; Abderrahman told us that diversifying the village’s projects was the main reason for starting an olive nursery. It takes about two years for these trees to mature and be ready for market. It’s even faster inside green houses. According to Abderrahman, the village’s business is 80% Agriculture.  Progress is being made, particularly after founding the association where he works. He dreams to see all his fellow villagers sharing his view of divergence and trying new ideas. This project is financed by the United Nations Development Program and managed by HAF and the Tassa Ouirgane association.

After visiting the Nursery, we marched about 3 km up hill to reach the main village. The other students and I spent some time planting some of the olive saplings from the nursery. Then we were introduced to some girls from the community, most were in their twenties. Their co-op was very in-sync despite an official Leader. Their work varies from cooking and baking sweets to harvesting trees. In “Tassa Ouirgane”, only about 20% of girls went beyond middle school, and only ONE has attended college!  The reason was parental worries.  Because the closest high school was in “Asni” village, 30 minutes away without any school provided transportation! 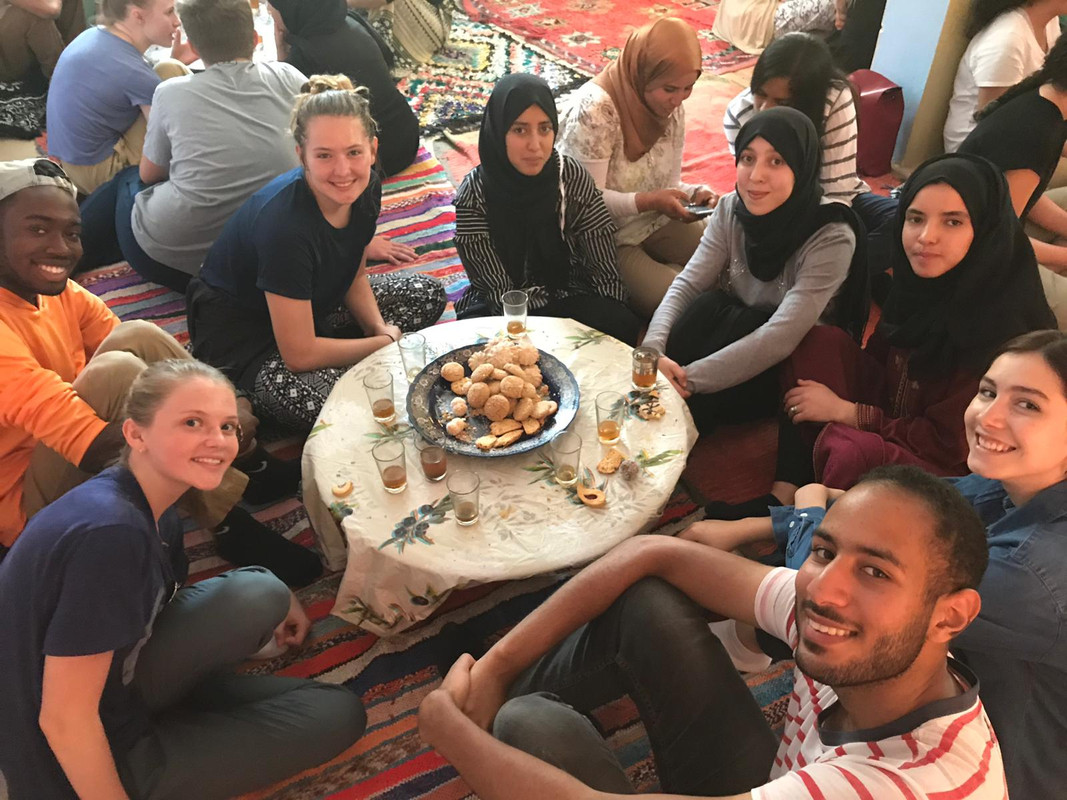 The villagers hosted the HAF team for Lunch. We were served many different sweets and pastries that were prepared in the village. The main dish was Couscous. We sat in small, mixed groups between students, teachers and villagers. We proved that despite the cultural and lingual differences, we are able to understand one another. I still can remember how uncomfortable the villager girl was when eating Couscous with the spoon. Everyone quickly agreed to try eating with hands as this is the traditional way of eating Couscous. This turned out to be far more enjoyable and made the meal even more delicious!

Before our departure, both hosts and guests exchanged some words of impressions and gratitude about this wonderful experience. Then we set off tired, yet very fulfilled.

Essaouira: The Small City Where Three Religious Communities Have Lived in Peac

By Fatima ZAHRA LAHRIRE HAF Volunteer [embed]https://www.youtube.com/watch?v=P3vCJ37Ch9k[/embed] In order to promote and preserve the multicultural past that Morocco is known by, HAF has taken immediate action in partnership… By Eliana Lisuzzo Development Manager Working towards any goal—large or small; individually or through a team effort—requires an action plan that will lead to achievement. Particularly for large-scale,…