On April 4th, HAF and local Moroccan women embarked on a new, exciting adventure!  HAF’s team, including Fatima Zahra Laaribi, Amina El Hajjami, Houria Chouhab, Martine Roberts, and myself, went to Taalanit, a small village located in the Setti Fadma commune of the Al Haouz Province. As we approached the hillside, we passed by fascinating landscapes riddled with marvelous changing colors. 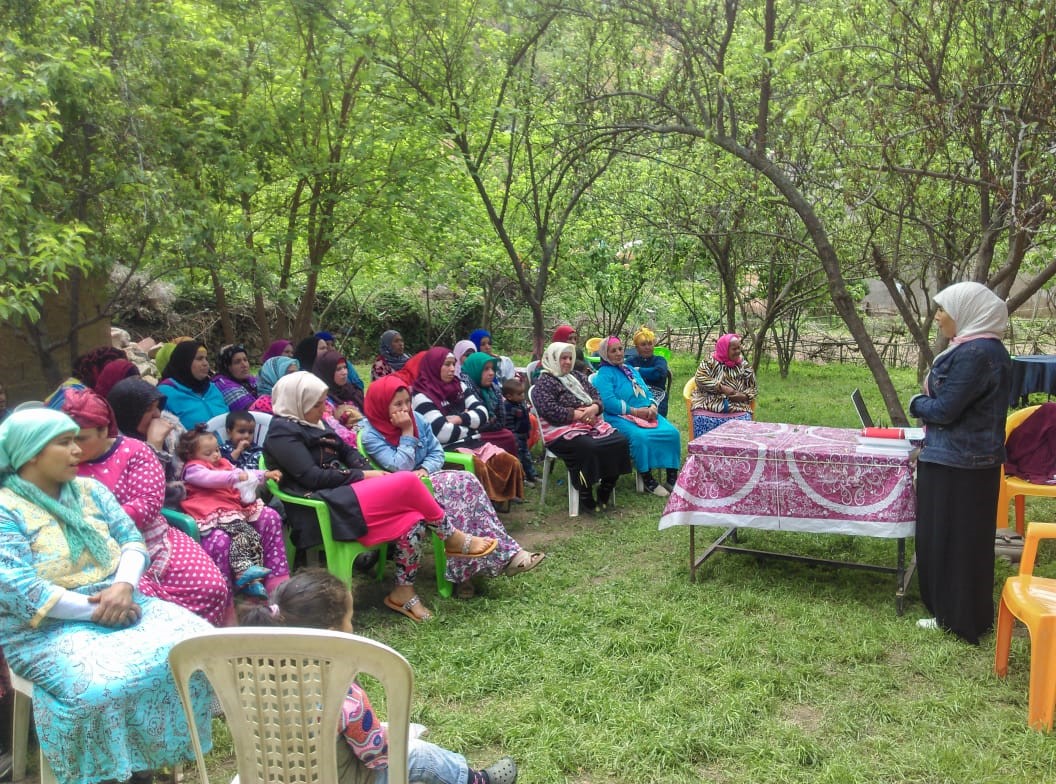 Amina does room exercises with the rural women

The first day of the Imagine four-day empowerment workshop began by meeting the rural women next to a local café. It was facilitated by Amina  EL Hajjami, HAF’s Director of Projects. Amina led this training, with the aim to help women of Taalanit empower themselves and better their livelihoods.
Amina started the workshop in the local language of Tashelheit with a brainstorming activity of introductions, challenges, motivation, and available solutions. This method had an effective way of breaking the ice with the 46 participants aged between 16 and 60 years old, most of whom do not speak Arabic. Although there were no responses at first, caused by a lack of understanding regarding new concepts and words such as “training,” one woman had the courage to take initiative in answering some questions. As a result, others were encouraged to participate in the discussion as well. 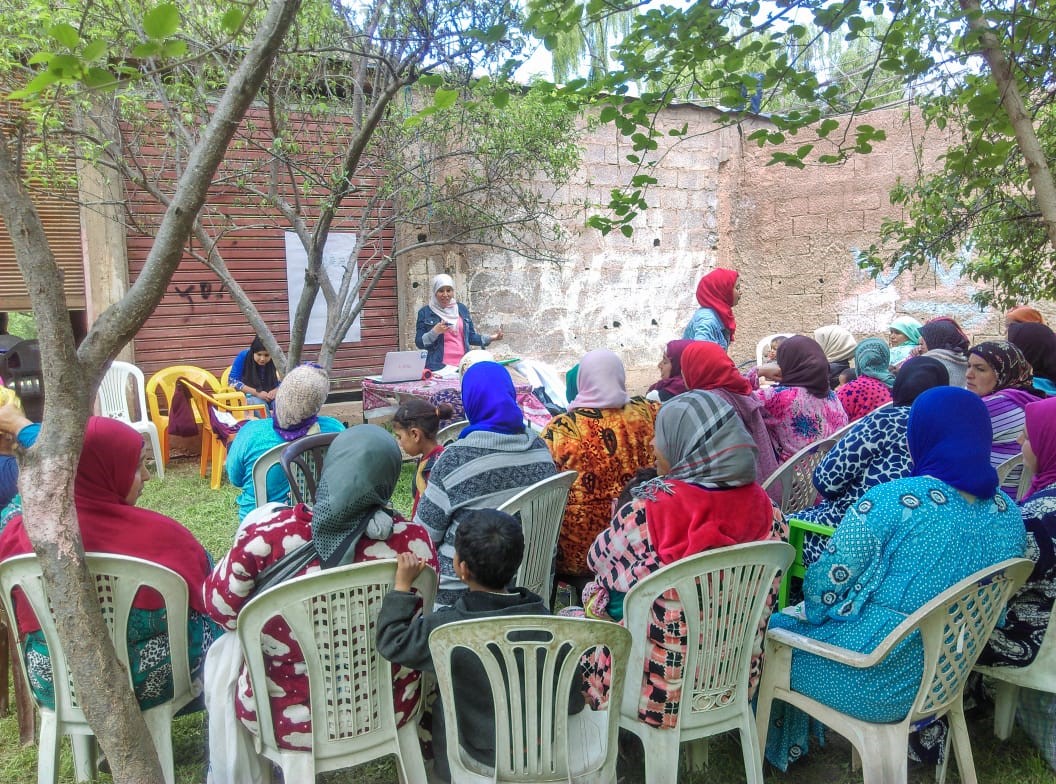 Amina conducts the training for rural women under the shining sun.

As discussions unfolded, women spoke up about the different factors controlling them, such as traditional rituals and social norms in their community. The following statements particularly caught my attention:

In my opinion, male domination is highly prevalent; they have the upper hand in rural areas of Morocco. I have been told that most rural Moroccan women have only two advances in life: the first is to move from their parents’ house to their husband’s; the second is from their husband’s house to the grave.
The second day of the training was a surprise to us as the participants enthusiastically arrived full of wonder and ready to explore. This time, they had the will and passion to make progress in their lives. Amina led a “room exercise” for determining the women’s weaknesses and strengths. We found that sources of personal power are committment, discipline, inner guidance, a support system, lightness, love, and finding your own truth. Additionally, any activity we need to accomplish requires the power of imagination, which fosters passion to achieve dreams and, thus, leads to happiness. 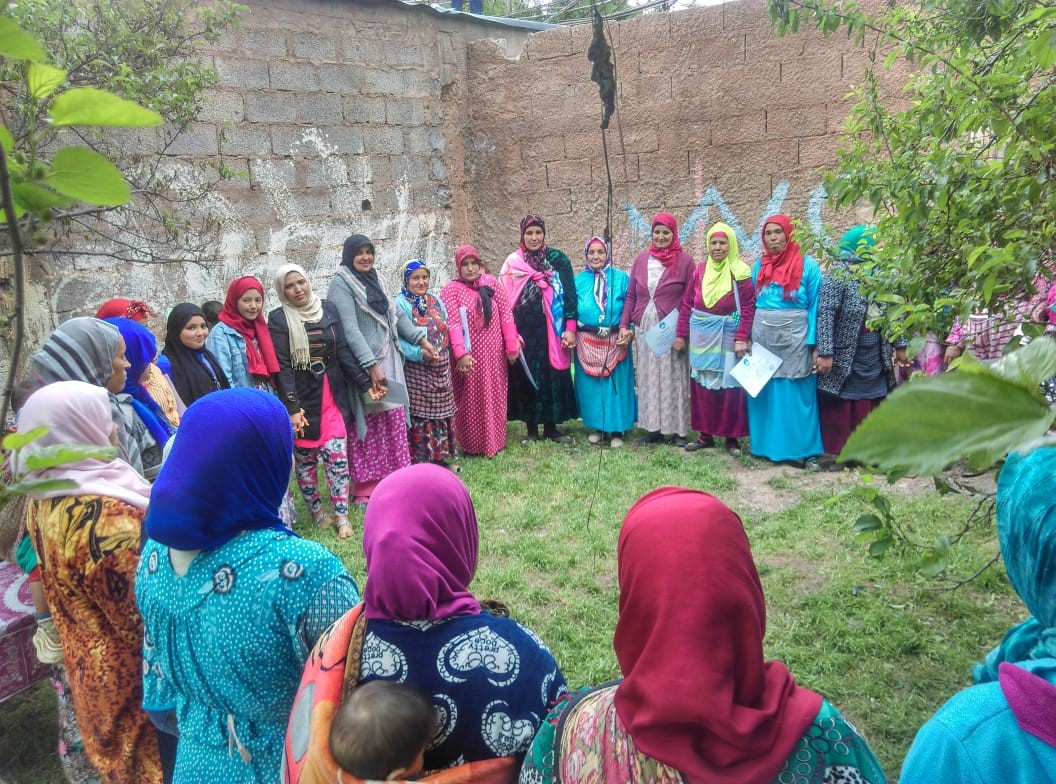 Women gather in a circle to discuss their change of attitude after Day 1 of the workshop.

Education is also very important in life. Notably, I observed that in every meeting we facilitated, most women we spoke with asked about education. Especially after learning more about Amina’s academic and professional experiences, participants developed a strong belief in a need to be educated in order to get a job and earn money of their own. 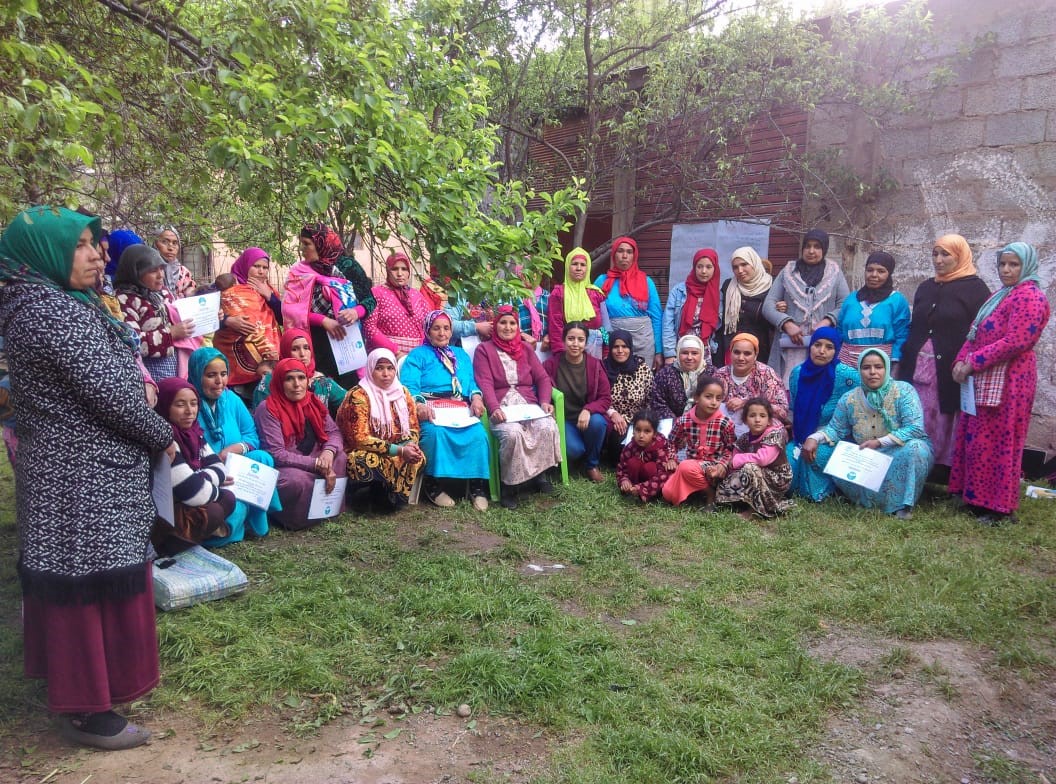 One of HAF’s important objectives is to empower rural women, guide them in having a clear vision of their lives, and to make a positive impact on them. It is often difficult for others, particularly men, to have insight into the value of women’s daily work both inside and outside of the house. The participants had voiced this value as a result of the workshop, and affirmed that if they give themselves value, then men will do the same.
Before leaving Taalanit, we asked the women what they learned from the empowerment training to which we received many positive responses. One participant said, “Unlike the past, our eyes and brains are opened now.”

It Rains Empowerment in Talaint

By Houria CHOUHAB HAF Volunteer On the 4th of April, a team from HAF conducted a four days workshop in Talaint, in the Setti Fatma Commune. It was…

We Are in Aboghlou Cooperative!

By Sanae Benaadim HAF Volunteer One month of my volunteer experience at the High Atlas Foundation has already passed! I had my second chance to accompany Amina El…