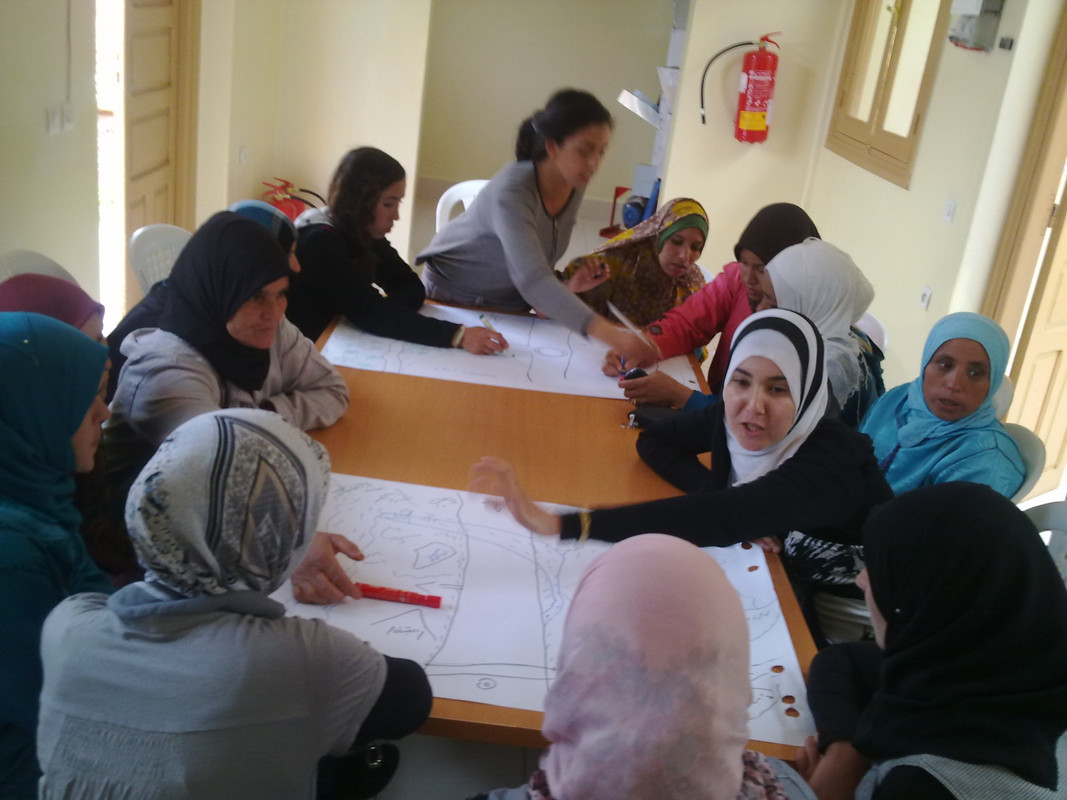 The High Atlas Foundation (HAF)—headed by a distinguished Board of Directors, Advisory Board, and operational team of both Moroccans and Americans—is a U.S. and Moroccan 501(c)3 nonprofit organization that was created by former Peace Corps Volunteers in 2000. HAF facilitates and builds people’s capacities in participatory democratic approaches to catalyze economic growth and endorse grassroots development in disadvantaged communities in Morocco. We have successfully worked in 23 provinces in Morocco by effectively building trust with the government and local people by responding to the self-prioritized economic development needs of communities and civil society.

HAF cultivates networks of empowered women agents of change to achieve economic growth and abilities. By conducting workshops that integrate a rights-based approach (RBA) to Moroccan family law (Moudawana), HAF fosters women’s self-discovery, a necessary step in the process of increasing female participation in the economy. HAF implements its Imagine women’s empowerment workshops, innovated in conjunction with the U.S.-based Empowerment Institute, which now incorporates both the RBA and economic planning approaches. These workshops focus on helping women achieve their self-identified economic goals through cooperative development. Women become educated on their rights and their potential outside of their strict traditional boundaries. Otherwise, as we have observed, their decision-making may be detached from their own economic needs and interests.

Since 2011, HAF has engaged in cooperative-development to advance women’s financial independence, expand networks, and support changing women’s economic roles in their communities. HAF’s women’s empowerment programs address these challenges in helping women to achieve self-confidence, independence, self-identified goals, and economic participation. These capacity-building programs have been funded by the Middle East Partnership Initiative (MEPI), the Bureau of Oceans and International Environmental and Scientific Affairs (OES), and the National Endowment for Democracy (NED). Further, the programs have been implemented with our university partners: 1) Faculty of Letters and Human Sciences at University Sidi Mohammed Ben Abdellah in Fes; 2) Faculty of Letters and Human Sciences at University Cadi Ayyad in Marrakech; 3) Center for Human and Social Studies and Research at University Mohammed I in Oujda; and 4) Young Moroccan Leaders of the Hassan II Agronomic and Veteran Institute in Rabat. Our university partnerships have led to the establishment of Centers for Sustainable Development and spaces for participatory democratic citizenry, which respond to the development needs of each local context.  To date at the Centers, we have trained approximately 1,000 students, building their skills in facilitating participatory planning and decision-making in communities, and have provided experiential learning in decentralized socioeconomic development management.

Since 2016, 40 women university students have participated and are trained in facilitating the women’s empowerment workshops that include the integrated self-discovery, rights based, and economic cooperative development components. As students from Marrakech University mentioned, “We see the issue of using rights, including economic, as a shared responsibility or even as national mission.” Moreover, students were well informed of the different articles of Moudawana which incorporate economic development, and are highly motivated to shift their knowledge to others. During the same period since 2016, 380 rural women experienced HAF’s women’s empowerment workshops in the regions of Marrakech, Al Haouz, Essaouira, Mohammedia, Oujda, and Boujdour.

In 2016-17, utilizing a combination of both quantitative and qualitative tools (mixed methods), a survey tool was designed and adapted by HAF to capture data in the form of leading women’s group discussions. The survey, delivered in Darija or Tashelheit, had four main parts: general information (age, level of education, and distance of their home village to the city); assets; needs and personal perspectives on different socioeconomic subjects; and participatory planning of economic actions. The purpose was to investigate barriers preventing women from possessing the knowledge and accessing resources to transcend their traditional roles and engage in economic development. Women reported that lack of independence due to social norms prevents them from leaving their villages and thus from pursuing financial opportunities. Moreover, traditional gender roles uphold men as the designated breadwinners in society. One woman reported, “Gender has its own responsibilities, men are responsible for money, we take care of the house, cook, clean, help the children.” While most women expressed frustration with these limitations, some women were unable to imagine having such independence. Lastly, women lack the opportunities, such as training, to learn and enhance their existing skills in order to become financially independent. Through our rigorous collection of data and evaluation, HAF ultimately found that the barriers to economic participation women face are: 1) lack of access to education, 2) social norms, and 3) technical reasons such as lack of training or access to information. Further, an ongoing challenge in rural communities is ensuring that women are included in decision-making. Hence, they lack the confidence to express their point of view, their needs, or wishes.

Successful results of HAF’s empowerment workshops include the Aboghlou women’s cooperative, established in partnership with the PUR Project. Aboghlou has now become  a self-sustaining and profit-making cooperative, employing STEM knowledge and produced over 200kg of dried calendula (a popular Moroccan medicinal herb) that was exported to L’Oreal in France. There are similar examples of thriving cooperatives that have resulted from our program. After participating in the workshop, one group secured bureaucratic support to start their own cooperative and earn income. As they had the relevant knowledge to start a crafts cooperative, they became highly motivated to start the process after the program. Notably, women who are members of a cooperative indicated that this provided them an opportunity to exit the village, become more equal to men, and more financially independent.

A 2017 evaluation report by an external researcher[1] indicates HAF’s project strengthens women’s capabilities including independence, gaining STEM and other skills and knowledge, and capacities to improve their realities. Women in cooperatives reported that they have found communication and utilizing the participatory democratic procedures in identifying economic solutions for development to be important. A group of 35 women addressed illiteracy by hiring a female university student and starting a literacy program in their village; and 65% of participants have joined parent associations and are actively involved in efforts to improve local schools for their children’s benefit.

In 2018, HAF and MEPI also implemented the initiative in the Oujda-Oriental region. A women’s cooperative founder in the village of Zagzal who participated in the training reported that attending was vital in learning about the legal components of running a cooperative as well as how to market her products and cooperative to both customers and other women who may be interested in becoming a member. A women’s cooperative in Esasouira that sells argan products was able to plant 2,000 new trees thanks to a partnership with HAF and Fre skincare. In addition to the income that these trees will generate, the partnership provided training in women’s empowerment, educating the members about their rights, and provided school supplies for their children, to help combat the high dropout rates that are still pervasive in rural Morocco. The cooperative’s founder explained that earning the income brings women purpose in their lives and enables them to invest their earnings in their homes and in their children. In Boujdour, HAF helped establish a cooperative for single mothers and constructed gender-segregated bathrooms and clean drinking water systems at seven schools.

HAF has four experienced empowerment facilitators and is currently training three more. HAF’s established partnerships with Moroccan institutions of Higher Education Communities are fundamental in making possible the widespread implementation of this project with students who receive training and then support implementing with women in rural communities in four regions. Moreover, HAF has 25 paid staff members, and may have five Moroccan and/or international volunteers working from its main office in Marrakech at any given time. In addition, HAF has regional managers whose roles are to assist in the process of local economic development through cooperatives, civil associations, and municipal councils. HAF and MEPI in the Oujda Region with Its Cooperatives

The High Atlas Foundation (HAF) has worked in the Oujda Region for three years. HAF’s Marrakech and Oujda teams came together in August to facilitate women's empowerment and cooperative development…