Marrakech is a city entrenched in diversity, this diversity manifests itself in many ways: economically, culturally, and perhaps most notably, religiously.

On 21st of May, Mr. Jacky Kadoch, the President of the Jewish Community in Marrakech-Safi region, organized an Iftar ceremony that brought both Muslim and Jewish communities together to the same table. This assembly was honored by the presence of an official delegation presided by Mr. Karim Kassi-Lahlou, prefect of the region Marrakech-Safi. High Atlas Foundation was also invited to this fraternity reunion and with great pleasure, Dr. Yossef Ben-Meir, HAF President, accepted the request and assisted with a part of his team. The Iftar ceremony was held in Beth El Synagogue, which means the House of God in Hebrew.

When I entered the synagogue, many things grabbed my attention, most especially the harmony of both Red Tarbouch, Moroccan Muslim hat, and the Kippa, the Jewish hat. In one table, you find a Moroccan man with his Djellaba and Tarbouch, and by his side sits his Jewish peer with a Kippa. Such a marvelous harmony! 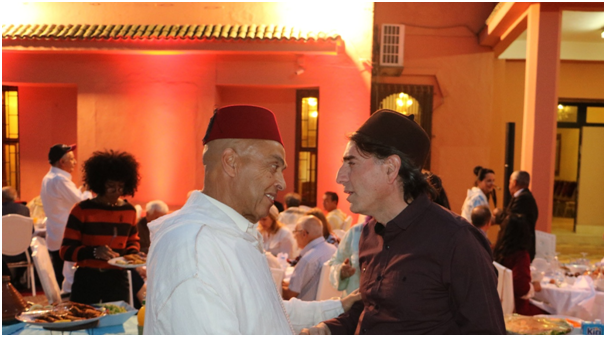 Before sunset, the Imam, or Muslim priest, gave a sermon about this religious fraternity and the shared call for unity instead of fragmentation among all religions. This unity and coexistence among Jews and Muslims is not a new idea, it is seen in the past by the way the prophet Mohamed (PBUH) used to treat his Jewish neighbor and servant.

Furthermore, the Prophet married the daughter of a chief of one of the Jewish tribes back then. It is also reported that a funeral of a Jew passed before the Prophet (peace be upon him), and as a sign of respect, the Prophet stood up. The Prophet was then asked “Why did you stand up for a Jewish funeral?” and he replied, “Is it not a human soul?” From this example it is clear that it is a must to keep humanity first thanreligion, not the other way around. Upon the conclusion of the Imam’s speech, pigeons were set free into the sky as a sign of peace and happiness between the two religions. 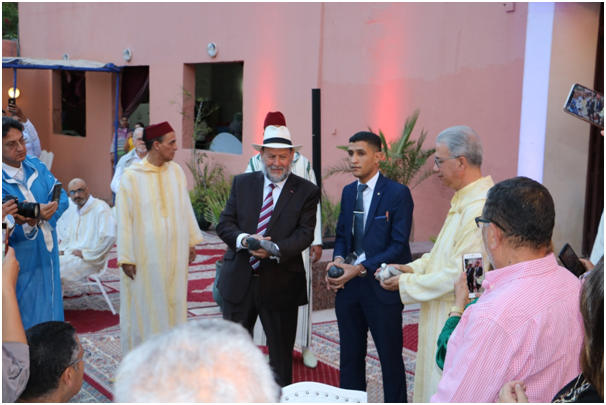 A few minutes afterward, the Adhan (Islamic call to prayer) was raised in Henri Kadoch Synagogue, calling people not only to break their fast but also to celebrate this fraternal union. Since the Iftar was in the courtyard, the president of the Jewish Community, Jacky Kadoch suggested praying inside the synagogue in front of the Holy Ark of Beth El, where the scrolls of the Torah are kept. 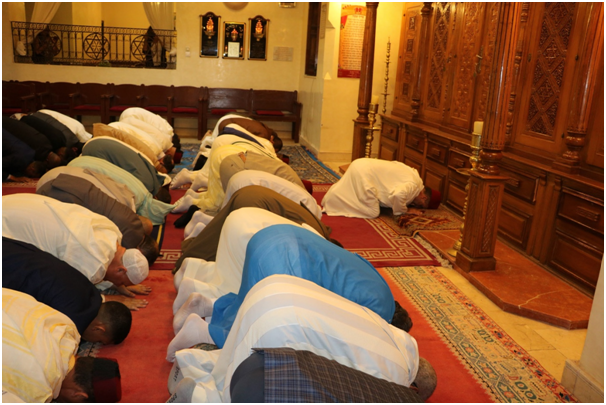 This may be an especially unique image that can’t be found in any other Muslim country. Morocco stays an exception and is open to the solidarity of Jews and Muslims living side by side in harmony. The Moroccan king, Mohammed VI, gives great attention and care to the Jewish Community through restoring the Jewish Quartiers, synagogues, and cemeteries. Additionally, Moroccan architecture plays an important role in confirming this coexistence between religions. The Jewish Quartier, El-Mellah, with the Jewish design, is taking place in the center of the Medina and is adding cultural value to the city’s diversity.

The beautiful multiculturalism and harmony of the Moroccan mindset and identity can perhaps be best summed up in the extract of an interview with King Hassan II in “ Le Génie de la Modération”: I have always been convinced that there is no problem without a solution. If the Arabs on one side and the Jews on the other put their genius and all their intellectual faculties in common – as I said once – we are convinced that Abraham’s descendants will find, each on their own side, what would guarantee them dignity, freedom, and sovereignty.

The Best Is yet to Come

CHOUHAB Houria HAF Volunteer On the 22nd of May in a commune called Ounagha 25km away from Marrakech MOGADOR Cooperative, a women’s cooperative of Argan products and Amlou,…

Essaouira May Stand as a Great Example to the World

Peter Wu, HAF Volunteer Essaouira may stand as a great example to the world for how religious diversity should prevail: Jewish, Muslim, and Christian communities have historically co-existed…