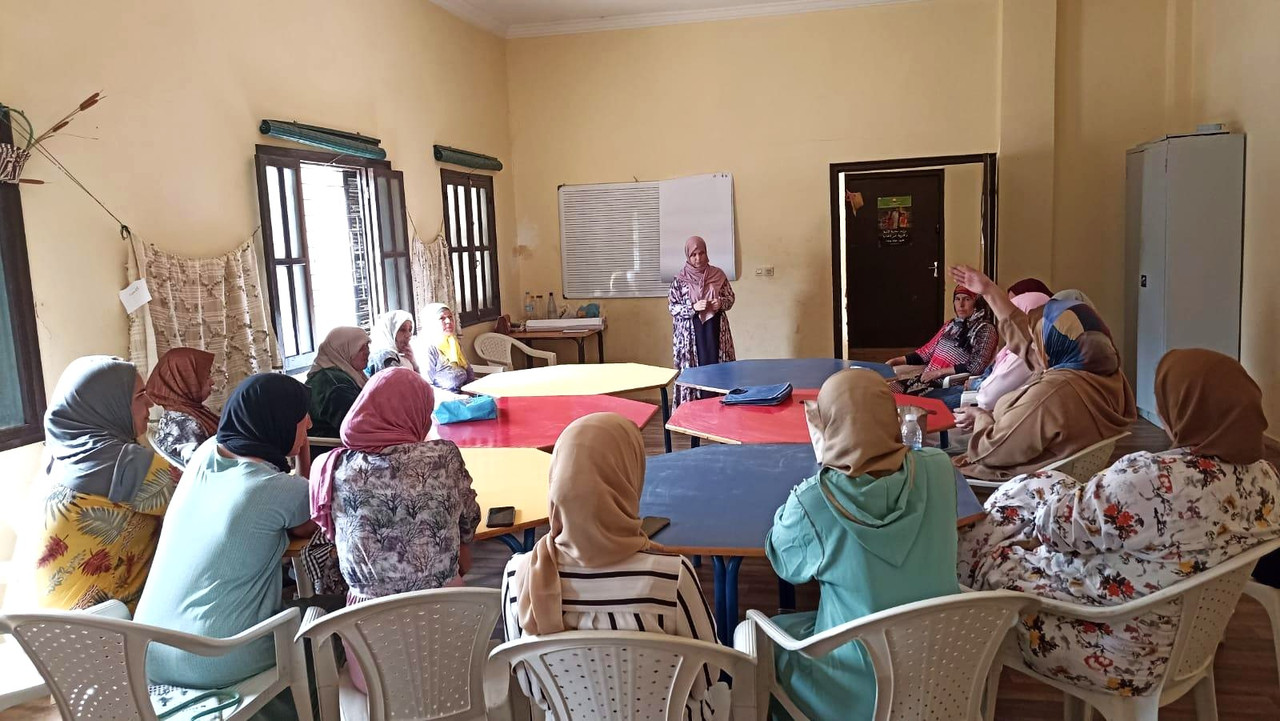 Fatima is a 60-year-old mother of a young man who she feels is not responsible, unfortunately, even for his children. He does not have defined goals to achieve or his own dream to realize. Fatima feels broken by her son’s situation.

She said, ”I think I am responsible for my son being a failure. I was the mother who did everything for him, and I never let him be in charge. I even chose a wife for him, one of the village girls, because I thought marriage would change him, and he would become a self-reliant and responsible man. But I feel worse because now I’m responsible for supporting his wife and children. He abandoned them. I couldn’t accept what happened to me, and I became nervous and developed diabetes. Some people looked at me with pity, and I couldn’t take it anymore. I feel that my life and happiness are lost with my son’s unfulfilled life.” 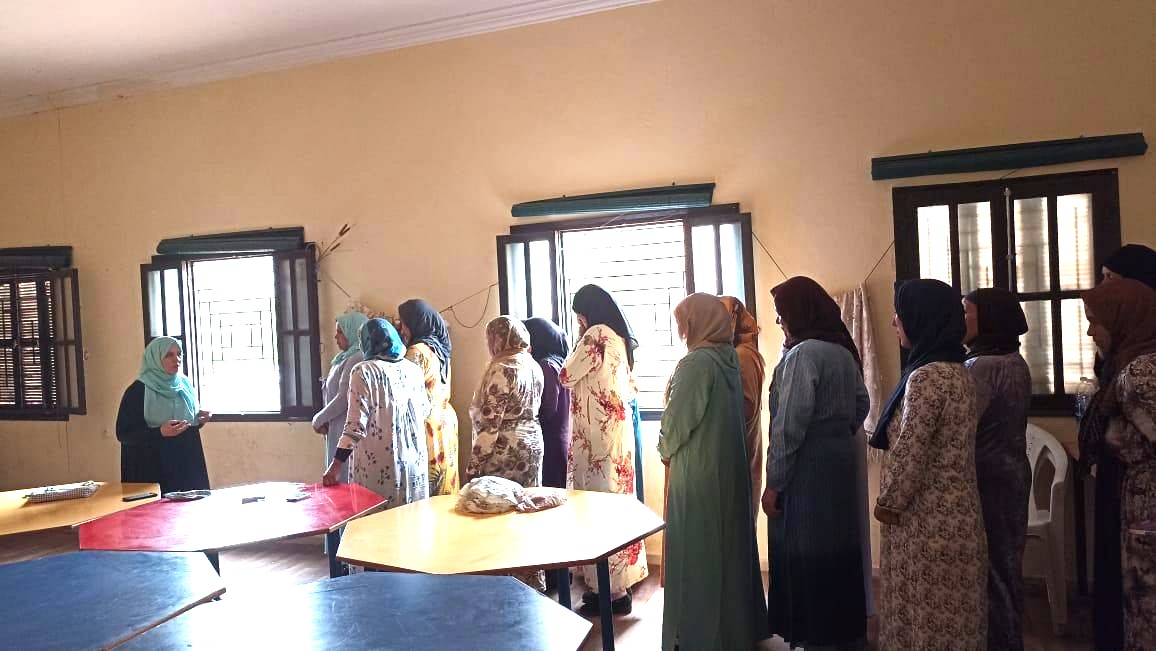 Tunnel exercise – forgetting bad memories from the past. Photo: HAF

Three Imagine apprentices, Safae, Oumaima, and Ilham, joined me, a women’s empowerment trainer, to facilitate the Imagine workshop with 22 women from a cooperative in the Azilal province. All members of the High Atlas Foundation team, we listened to the women more than we spoke, and Fatima and others shared with us more about their situations and what makes them dissatisfied in their lives.

Some women left school at an early age because it was difficult to access the school, which is two hours away on foot. Some of them started working early on in life to help their parents with harvesting and sheep grazing. It is difficult to fully appreciate the many challenges rural women face to secure a stable livelihood.

“Ichka lehal.” I was sorry to hear these Amazigh words many times from the women, words that mean “life is hard.” They live in the middle of a natural agro-source, known for its reserves of water, high quality apple varieties, and large 150-year-old (or older) walnut and almond trees. Normally, these women should have a good livelihood, but, unfortunately, none of them thought to invest in these natural resources by, for example, making apple juice or valorizing the organic walnut and almond  fruit.

Since 2019, HAF has supported the cooperative in planting saffron, a positive initiative that involves the women in agriculture. They have demonstrated and expressed their desire to continue this activity; however, selling the product is still a challenge for them. In response, the USAID-funded Farmer-to-Farmer program will follow up with them to provide volunteer expertise and training in marketing.

The Family Literacy program, financed by the European Union, is providing additional support. The cooperative’s president, Lalla Nadia, expressed that the women are so excited for this because they have been waiting to actualize their dream of writing and reading. With bright eyes, she exclaimed, “Now, I believe that I will read the Qur’an myself, and I will be able to pray correctly because I started the course.”

Oumaima, who is a Cultural Coordinator for the USAID Dakira program, conducted an identity exploration exercise that generated interesting dialogue. During this exchange, the women expressed that although they experience serious difficulties, they are proud of their origins, traditions, and customs, including rituals around special occasions such as weddings and holidays. They are grateful to their Ait Bougmez community for giving them such deep roots.

One of the women, Layla, shared that she considers it an honor to be a woman from Ait Bougmez and to grow up in a community that exudes solidarity in the midst of its apple and walnut trees, as the people here are bound to agriculture. She further explained that each family has land for at least 10 apple trees. “Five years ago, Ait Bougmez had a huge source of water, seeds grew naturally, and water was everywhere,” she said. “But now we feel afraid to lose this source since livelihoods are based on apple and walnut trees.” 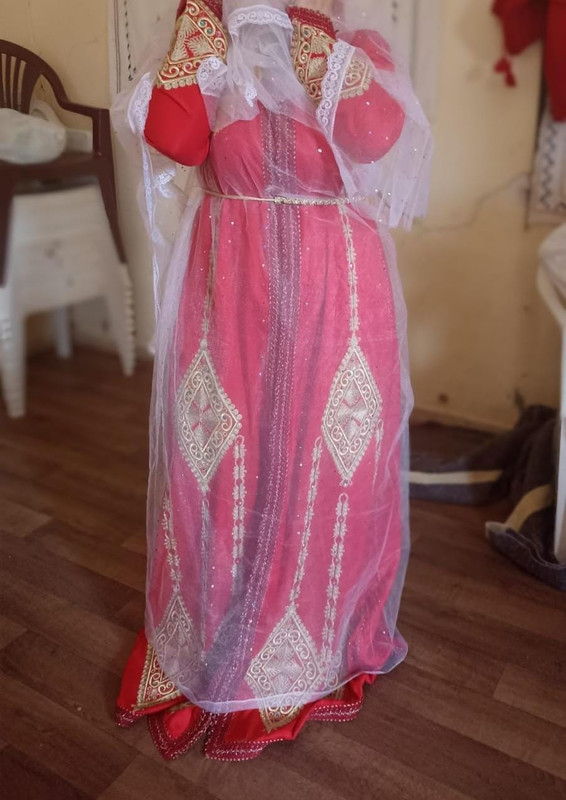 The Azad veil, which is commonly worn by brides in the Azilal province. Photo: HAF

Hanane, another participant, also shared her thoughts: “I remember, when I got married, my mother gave me the Azad cloth, which is a special veil for the bride. She wears it before going to her husband’s house. Covering her head, no one sees her that night. We still wear this veil now, even for modern weddings.”

Lala Fatima, who is 70-years-old, reminded the women of prayer time. She uses Tasbih all the time, and last year, she performed the Hajj pilgrimage with her son. She spoke with love about her visits to Al Madinah Al Munawwarah and the Kaaba, performing the Kaaba Tawaf, drinking Zamzam water, and her relationship with God. She expressed: “Daily worship is my identity. Walking in the footsteps of the prophets and visiting the city that the prophets and messengers passed through, to touch the Black Stone, and to circulate at the Kaaba is a distinction and a choice from God for me. I think this is what defines who I am.”

As she said these words, the women kept silent. They just moved their heads to convey agreement, admiring Lala Fatima’s devotion.

By Lamia Radi, President of Fondation Mémoires pour l’Avenir In Morocco’s Middle Atlas Mountains, near the town of Azrou, travelers come for hiking or to see the famed…