Reflecting on a Day of Planting

My Tree Planting Day began with a rain-soaked Marrakech morning. For the first time since I had arrived in Morocco, I felt the chill of winter cutting through me. This biting cold wormed its way past my meager layers and rested an icy hand on the back of my neck. My breath came in thick opaque clouds, pushing its way out my nose and mouth and reaching its slender fingers towards the steely sky above.

I met High Atlas Foundation staff members Amina and Imane, along with fellow volunteer Taoufik at the foot of the steps before HAF’s office building. From there, we drove, weaving through early morning traffic, to the town of Asni. Asni seems a placid village, nestled in mountain foothills, where the pulsing restless energy of the city is a distant and extraneous echo. There, we shared a hearty Moroccan breakfast, while warming our hands with the ever-present tall glasses of sweetened mint tea locals and visitors alike enjoy at all times, occasions, and places on a given day.

Soon after this, Amina and I continued on to our first destination, the village of Tassa Ouirgane in the Al Haouz province. However, before we were scheduled to meet with the local women’s cooperative there, we first had to make a stop at a nearby tree nursery to collect the saplings we would be planting. Upon arrival, we met up with a HAF affiliated tree nursery manager named Hasan. After a short collection process and with the necessary trees in our possession, we drove the remaining distance to the village following a twisting serpentine road along the sheer hillside. 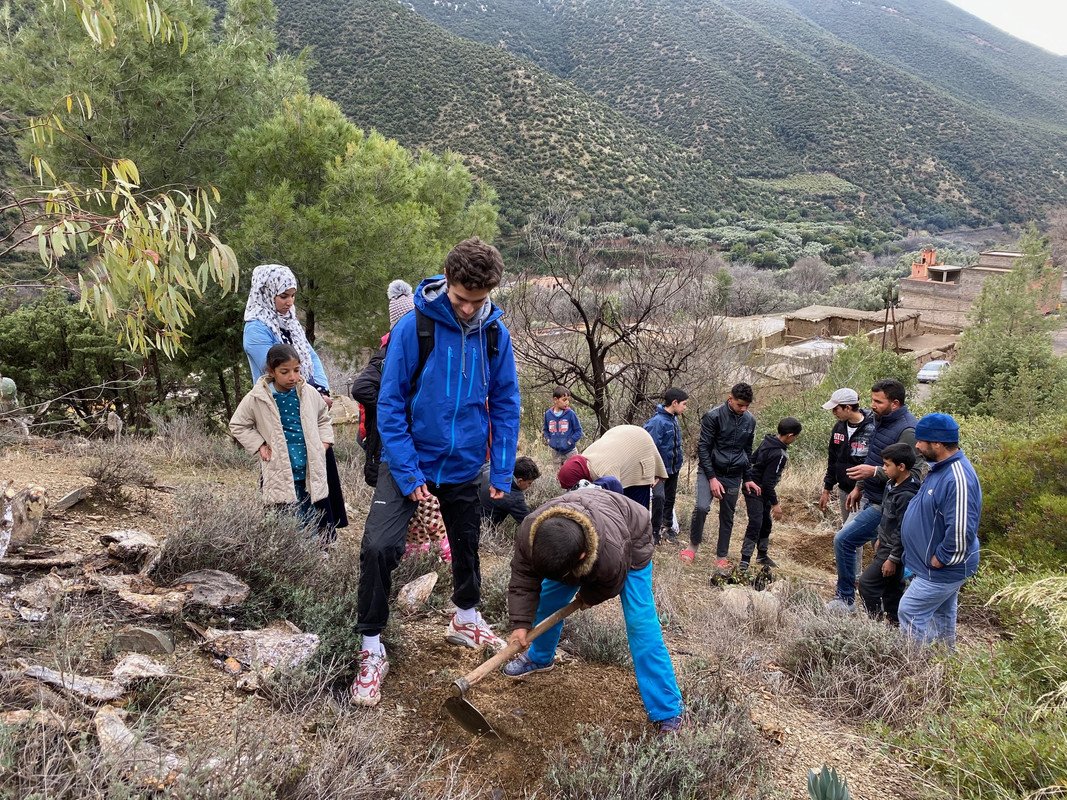 At Tassa Ouirgane, the participants in the morning’s activity slowly made their way over to where we had unloaded our trees. HAF’s years of work with this community, since partnering with them in 2011, was on full display when more than thirty men, women, and children came to greet us. Yesterday, just two weeks after officially founding the Tassa women’s cooperative for the management of trees planted in the area, these women showed that they were ready, willing, and able to take on this communal responsibility.

The rain-soaked day would not dampen our spirits or resolve, as we trudged up a hill overlooking the village to reach our planting site. In total, we had thirty carob saplings, fresh from their nurseries to plant. We began our work excitedly, breaking the earth to make shallow indentations in the hillside, before carefully lowering the young trees into their holes, after stripping away the black plastic sheaths that had contained them in their fertile cocoons. 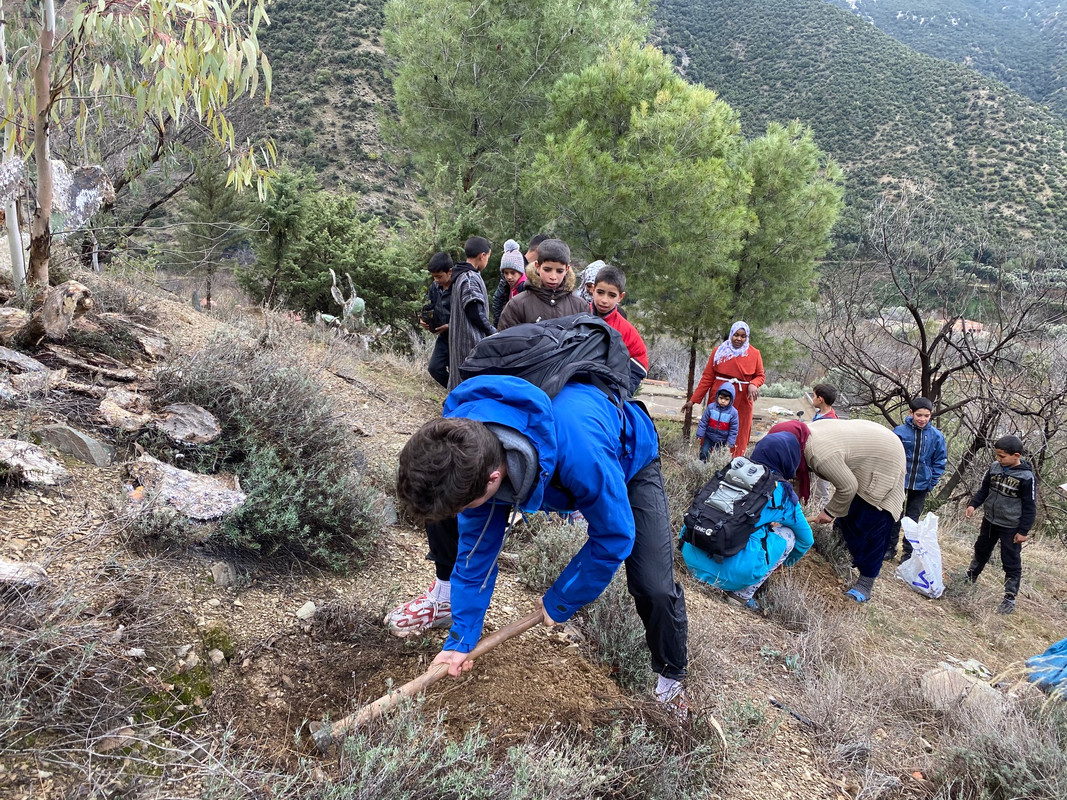 Laboring together, all participants willingly ceded responsibilities to each other. We worked in unison, quickly and effectively finishing our task. When the planting was complete, all eyes were turned to Amina as she started her presentation on climate change, the environmental impact of planting trees, and what role the people of Tassa Ouirgane could play in this initiative.

For me, the sight of these people, of which more than two-thirds were children no older than thirteen, offered a powerful moment of reflection on the true impact of this day. It is the hope that despite shortcomings of past generations and leaders, we, the next in line, who only know the world as it is, are willing to be the engines of change. The children of this village hear stories of the days when their parents, grandparents, and their parents before them walked through mountain hills not filled with piles of trash or drew water from overflowing streams where now there are only dry lifeless river beds that serve as reminders of things that have been taken away. These people show that despite this bleak reality, they will fight for themselves and their communities.

After concluding the discussion, we returned to the nursery we had visited earlier that morning with a handful of members from the cooperative. Once there, Hasan gave a demonstration for the women about how to properly transfer seedling walnut trees into small plastic bags for distribution to their final planting locations. The goal of this explanation was the continued promotion of self-sufficiency. The system of HAF’s partnerships that span across Morocco and the globe function best when groups play to their strengths and offer their expertise to others. 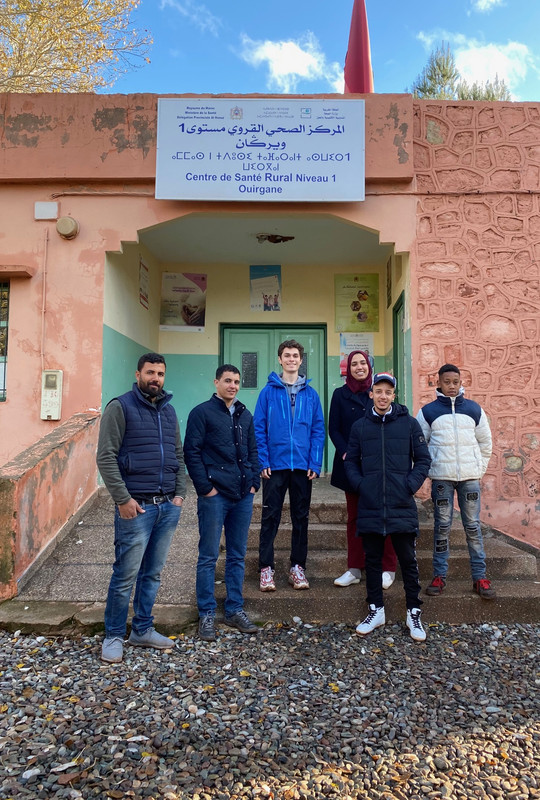 In the mid-afternoon, we reached the center of Ouirgane, our second destination. In conjunction with the area’s hospital and local association, we were to plant ten almond trees, ten pomegranate trees, and two carob trees. These nascent plants would both beautify the environment around the medical buildings and provide locals a means for future prosperity. We labored together, trading off between digging, shaping perimeters for the freshly planted trees, and scouting other possible planting locations in the surrounding area.

After all trees were laid in their places, Amina launched into a second rendition of her environmental presentation. However, this iteration was more participatory than the first because of our much smaller group size. Many of the same issues from the previous discussion were brought up once more. People spoke of how the renowned beauty and biodiversity of Ouirgane had withered and disappeared in recent years, with several of the local participants pointing to the creation and management of the Ouirgane dam as a source of this plight. Nonetheless, all left the afternoon’s event hopeful for what the future would bring, and what each individual’s role would be in helping to shape it.

“Plant a Tree Even If It’s the Day of Resurrection” Said the Prophet Muhammad (Peace and Blessings Be upon Him).

By Errachid Montassir Project Manager Every third Monday of January is the High Atlas Foundation’s annual event “Tree Planting Day.” On this date, all staff members and volunteers…