Public Participation in Environmental Protection in Jordan and Morocco 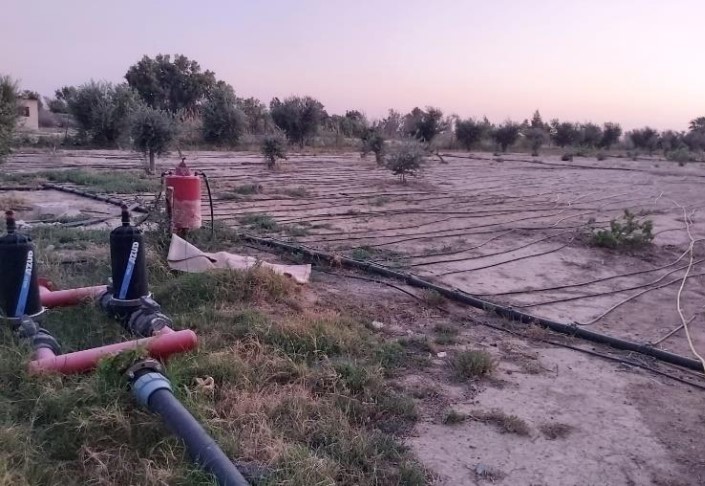 Caption: MIRRA irrigation project: Farm 2 after repairing the well and the preparations to plant crops on the land

The small grants were awarded for proposals focusing on educational and awareness-raising activities that engage a broad range of stakeholders and promote interactions between local authorities and civil society. 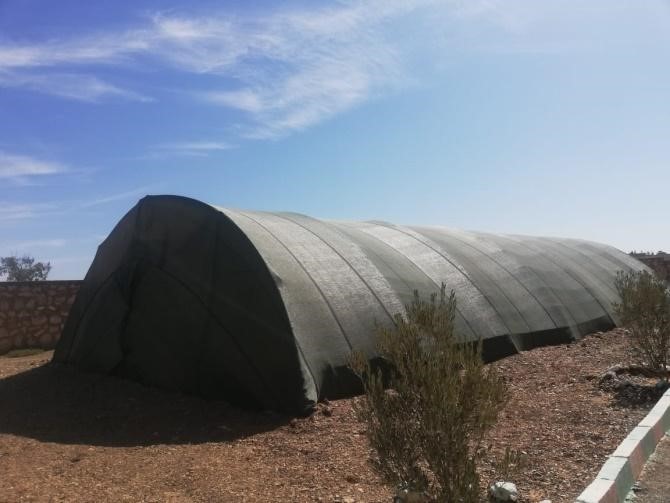 Caption: Alfath Association in Morocco is building a fruit tree nursery with a solar irrigation pump in Bouchane.

Among the 4 selected sub-grantees was Alfath Association for Development, a Moroccan CSO practicing in Bouchane and Ait Taleb, two rural villages in the Rhamna Province north of Marrakech. These villages are aware of the waste problems and air pollution they are facing,  Together and with the participation of local authorities, schools, and parents of students they decided to develop programs to educate the citizens on how to solve these, and other, environmental issues.

Alfath association and its partners are working together to achieve the project’s objectives including the creation of a fruit tree nursery with a solar irrigation pump in Bouchane. Their goals is to grow over 100,000 olive and other trees, providing the Ait Taleb community solar pumps for two wells to be used for livestock water, and to also enable the reduction of air pollution and  the elimination of the need for fuel, in addition to training students and their parents with the hopes of helping to establish a culture of environmental protection.

In cooperation with local authorities, Alfath was able to remove the traditional places locals were throwing waste, and instead take the waste to farmers to use as a fertilizer, improving the cleanliness of the area and helping the farms at the same time. One of the main deliverables of this project is a manual for each village to serve as a reference for measuring the development and the preservation of the environment.

As part of the OES program, HAF directly engaged 1,987 primary school children, 1,878 older youth, and 1,160 farmers in environmental action workshops that build knowledge around effective tree planting, clean water management, and participatory planning. These events – as part of HAF’s Sami’s Project – were also an opportunity to plant 15,144 trees as well as 445 medicinal plants and discuss clean water initiates with members of schools, cooperatives, and associations in 18 Moroccan provinces.

Despite the current COVID-19 crises in Morocco, Alfath is doing a very important job and will close the project in the next few months, hoping to have new project opportunities for the sustainability of its work and its impact. 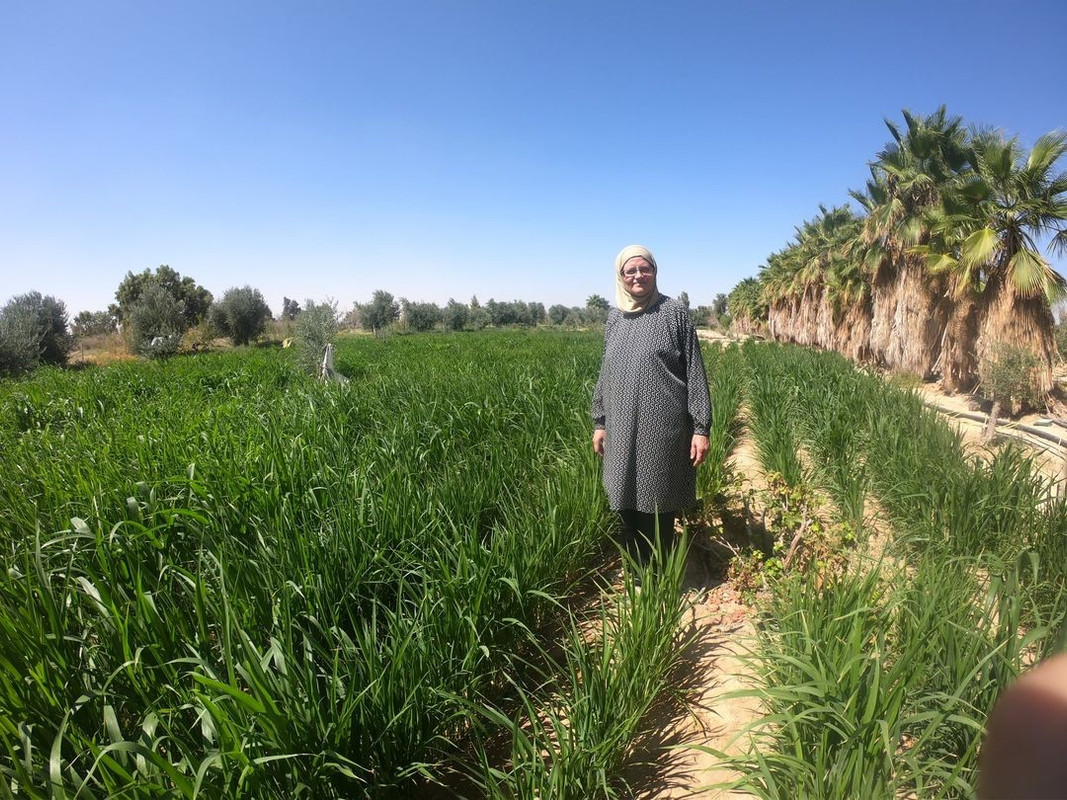 From Jordan, Methods for Irrigation and Agriculture (MIRRA), a Jordanian Non for profit organization was selected for a project entitled ”Realizing Sustainable Agriculture In Azraq.”

Azraq is a small town in the eastern desert of Jordan. It is characterized by depleting groundwater aquifers, limited rainfall, salinization of soil and groundwater, failing agriculture and ecosystems, and communities that struggle to survive and achieve. However, MIRRA, together with their local partner Rural Family Society (RFS), was able to see through these challenges and develop a path into sustainable development that will result in improved environmental conditions, sustainable agricultural practices, and enhanced livelihood of communities.

Thus, MIRRA identified the challenges and designed the solutions to implement through the project for a duration of 18 months.Members of the organization used an ultra-low pressure drip irrigation system in conjunction with magnetic water devices to irrigate fodder crops with saline water. They used this method as a mechanism for improving water management and mitigating the impact of soil and groundwater salinity.

The team utilized saline-tolerant crop species in conjunction with organic fertilizers, which are available locally and at a very low cost. This combination helps to transform ill-agricultural practices in the study area into sustainable agriculture that will result in greater feed production and improved soil conditions in the long run.

To ensure sustainability, equity, and gender balance, the team created two small demonstration farms — one for a female owner and one for a male owner. They also developed a curriculum which they used throughout the project.  Additionally, a team of young professionals was trained and certified to continue and expand the work. 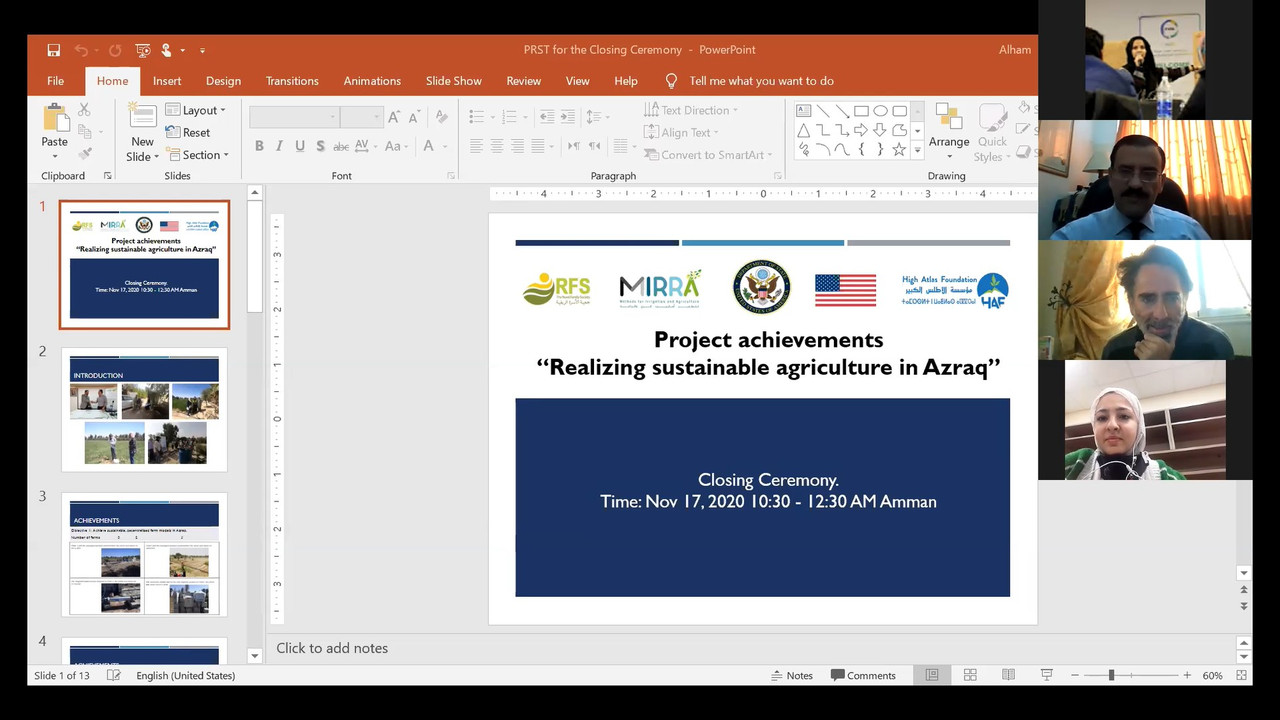 On the 17th of November MIRRA held the closing ceremony of the MIRRA-HAF-RFS project “Realizing Sustainable Agriculture In Azraq” to celebrate the successes of the project. The event showcased the successful outcomes of the project and discussed what will be done in the next phases.

There were more than 30 participants included but not limited to:

The ceremony’s final remarks were delivered by Dr. Yossef Ben Meir, President of the High Atlas Foundation: “Not giving up, know each other, share success stories and keep trying.”

When Civil and Business Societies Meet