Programmatic and Other Enduring Memories During My Stay in Jordan

I’ve been back in Marrakech from Amman, Jordan, for about a week now, back into the swing of planting trees as far and wide as our teams and partners can before the end of March.

I’ve been thinking about this blog, revisiting the truly beautiful experiences during my five day stay in Jordan. 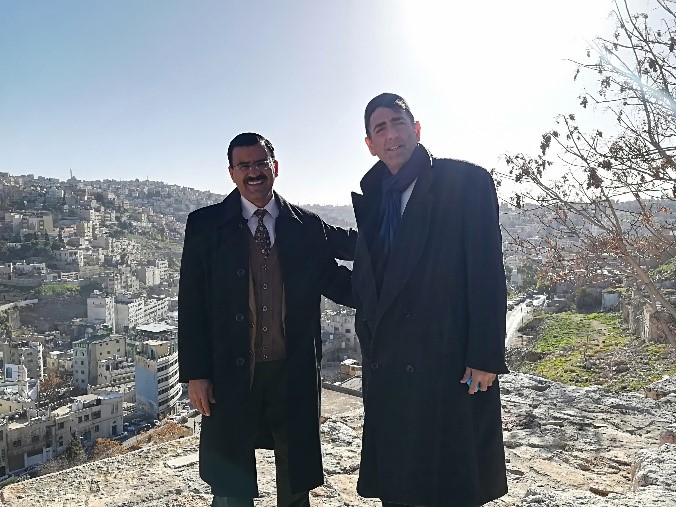 My journey in Jordan was made incredible by my friend, Dr. Mohammed Matouq (left).

First and foremost, I would like to thank Dr. Mohammed Matouq from Al-Balqa Applied University (ABAU) in Amman.  His graciousness is an inspiring example and his dedication to his students and to the sustainable future of his country are indelible parts of his wonderful way of being.  The High Atlas Foundation has amazing counterparts in him, and the students and faculty at ABAU.

We’ve been wanting to work together for a couple of years, to bring opportunities to young people and to advance livelihoods and the natural environment.  Then, during the fall of 2018, the Bureau of Oceans and International Environmental and Scientific Research at the U.S. Department of State gave us the opportunity to support four new sustainable projects, two in Jordan and two in Morocco (you can still send your proposal).  My purpose in going to Jordan was to listen to group discussions on their local needs, together identify and advance the partnerships to achieve priority projects, and to encourage them to make the best and specific case in their proposals for success. 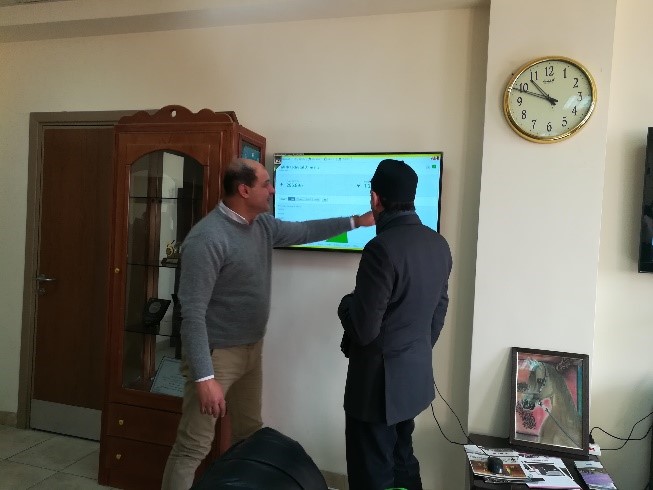 On my first day in Jordan, Dr. Matouq and I met together with ABAU’s Vice President of Academic Affairs, Dr. Ghandi Anfoka.  Dr. Anfoka’s thoughtful and forward-thinking reflections on the environmental conditions in Jordan and the situations that are leading to its alarming decline are shared by other faculty, students, and members of associations with whom we had the great pleasure of meeting.  The new and dynamic Vice President of Academic Affairs at Tafila Technical University (TTA), Dr. Jalal Abdallah, contributed to the consensus on a proposed action to create sustainable change: experientially train university students in facilitating environmental education activities and natural resource management, who then transfer that knowledge to schoolchildren.  HAF has important successes applying this approach with university students in Morocco, and our Jordanian colleagues seek to create joint-initiatives in this regard. 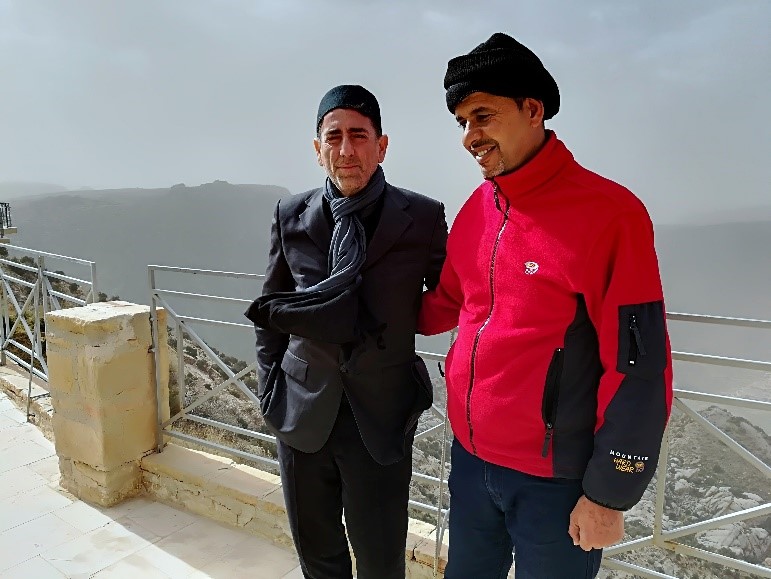 Speaking with artist and tour guide Ali helped me see how different pursuits we may have actually are reflections of a singular inspiration, and in his case, it is his home, Dana.

TTA neighbors the Dana Biosphere Reserve, a remarkable mountainous location, with the nation’s greatest concentration of biodiversity.  There are more than 250 bird species alone, and the Reserve, the largest in the country, has all four bio-geographical zones.  Thinking about its out of this world rock and mountain faces and formations, I am reminded that the biblical prophets walked the valleys of Dana.  In addition to all of this, I hold the visual in my mind of the bold colors and delicate and intricate pencil drawings made by Ali, the kind tour guide at the Guest House, who may know Dana the best in the world.

The two vice presidents of academic affairs are now developing a proposal to send 10 students (five from each of their universities) to spend ten days in Marrakech with the team of the High Atlas Foundation and its public and private partners to build skills in creating action-learning experiences with school children.  The university students will then implement these activities with young people in Jordan, to raise environmental consciousness and promote actions to protect treasures such as Dana. 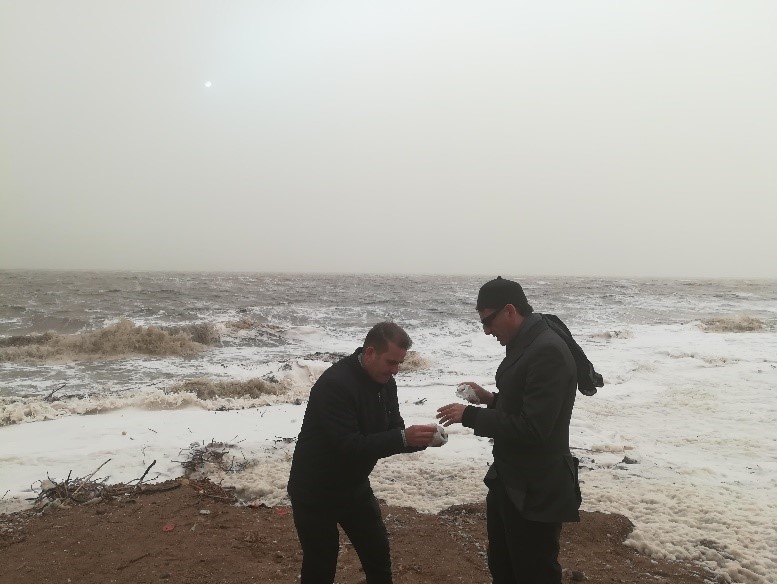 Partaking in the bounty of the Dead Seas with Dr. Naser Kloub.

Upon our return from the Dana Reserve to Amman, there was environmental event (weather-wise).  We knew snow was coming and decided that we would spend only the day at Dana lest we be snowed-in (which we later learned would have been the case).  We also decided that we would not return to Amman by way of the way we came–the Desert Highway–since it might close due to the powerful wind (which also later happened).  Our way back to Amman was instead to take us along the Dead Sea Road.

Seeing the Sea go by, I just had to touch the water, even as the wind was determined to pull us back, away from the shore.  Professors Matouq and Naser Kloub (once a faculty member at TTA and now at ABAU) were as determined as I to feel the Sea’s oily water.  They led the way down the deserted hills to the coastline, which was filled with the foam of salt and minerals.  We could only hear the wind, and at some moments we could stand only with all our muscles tightened so as to remain on our feet.  I will always remember the splashes, sprays, and salted air on our faces, clothes, and hands; the wind holding us up as we leaned our bodies into it; the treasured feeling of a new beginning, of passing through an experience like never had before.  When we arrived back into the car, pure laughter took us over, brought upon from our shared recognition of the magical moment that was just ours.  I felt in my heart a sort of “baptism”, only to see the sign further up the Road pointing to where a most noted baptism in our world happened millennia ago. 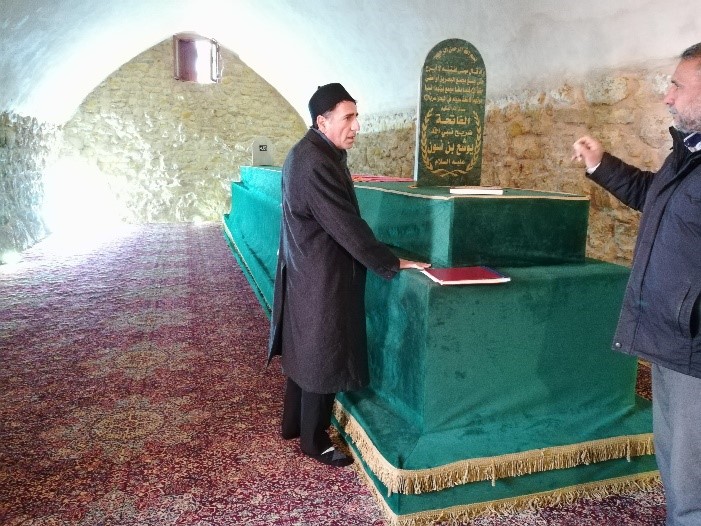 The tomb of Prophet Joshua.

I came to see Dr. Matouq as a great man of faith, informing his deep sympathy for his students, knowing that most of them will likely struggle, as do youth in Morocco; and also forming his profound sense and desire for justice for Jordan, the region, and world.  As Dr. Matouq drove us to his University our first morning to meet the Vice-President, he pointed just ahead to the burial ground of the Prophet Joshua, and he asked me if I would like to visit his grave site.  Yes, certainly. The High Atlas Foundation, partnering with the Ambassadors Fund for Cultural Preservation, helped preserve the Muslim, Christian and Jewish cemeteries in Morocco’s 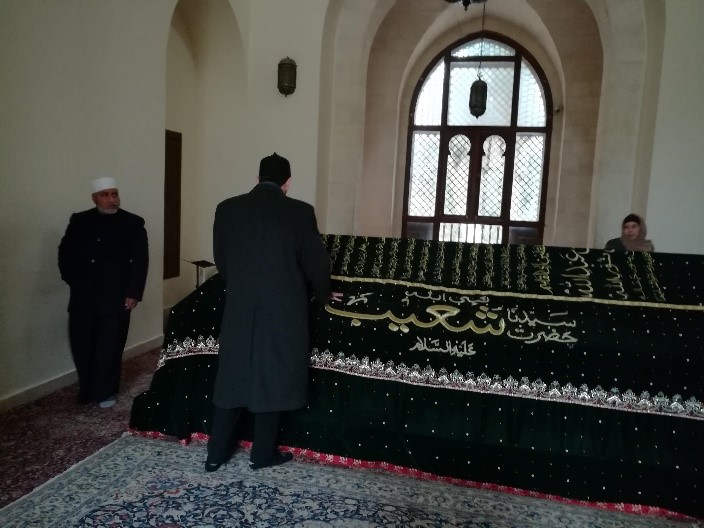 The tomb of Prophet Yitro.

Essaouira, where centuries-old saints are buried, and where we brought hundreds of local youth to learn about their diverse past.  HAF grows a fruit tree nursery (producing 150,000 saplings and counting) outside of Marrakech with family famers on land gifted in-kind that is located beside the 700-year-old Hebrew saint, Raphael Hacohen.  Former United States Ambassador to the Kingdom of Morocco, Dwight Bush, Sr., distributed the nursery’s first trees in 2014.  We seek now to do the same initiative in the Ourzazate provinceadjacent to the burial ground of the 1,000-year-old saint David-Ou-Moshe, which would produce one million trees over a four-year period.  For the first time to me, Morocco now felt young.  Visiting Joshua’s 4,000-year-old tomb in Amman, and then the nearby tomb of Moses’ father-in-law, the Prophet Shuaib (Yitro, the father of Tsipora), put into immediate context for me the majestic land where I was.  As our trip unfolded every day, and the good results and sincere friendliness grew from all of our encounters, Dr. Matouq often spoke the thought that also occurred to me, certainly after the Dead Sea experience: the good tidings of the Prophets accompanied us along the way. 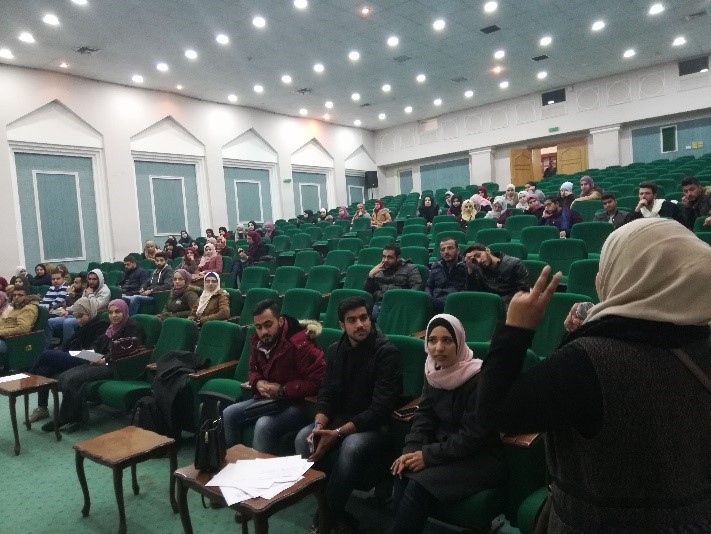 The expressions and important goals of the university students are what I carry most from my time in Jordan.  Among 70 students at ABAU, we spoke as a whole and in small groups about what they seek as part of the student body, their relationships with each other, sustainable development, healthy diets and behaviors, as well as the importance of writing and not delaying the pursuits of their dreams.  Their main project goals for their University: new and restored equipment in their labs, applied research and learning opportunities, renewable energy on their campus, improved services and communication, better food at their dining halls, and an exercise center.  For our partnership and commitment to each other, it has just begun.  Data is now being gathered so that we may develop a project proposal.

Check out this clip of the wonderful people–the students of ABAU–as they greet each other. 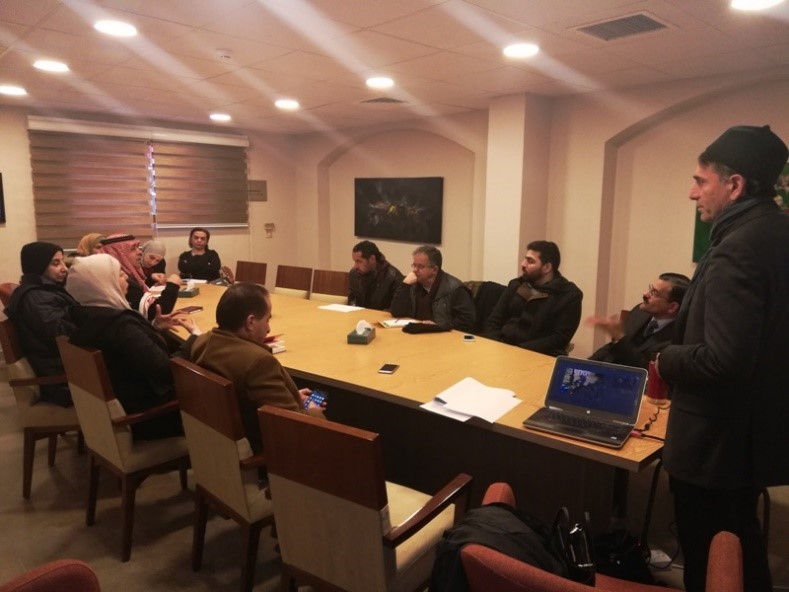 Finally and wonderfully, a young civil leader, Mousa, originally from Ma’an, helped bring together ten other nonprofit association representatives to meet Dr. Matouq and myself in Amman.  I blogged about this excellent experience.  The environmental project goals concentrated on including uplifting children: capturing their notions of the future they want to see through art; expanding clubs of volunteerism to more high schools and university campuses; growing nursery of endemic rosemary, and building the capacities and curriculum of school teachers.  HAF received three proposals from this group already, which will be considered for the Environmental Challenge with OES.

I miss my magical time in Jordan.  We are deeply grateful that our engagement for the sake of improving the environments of that nation and in Morocco will now open deepen, as we move to the next phase of determining the projects we will achieve together.

Thank you to my new and always Jordanian friends, and to OES for bringing partners together for sustainable environmental good. by Juliana B. Feltrin HAF Volunteer from Brazil Yesterday, I had another great experience as part of the HAF volunteer team. We left the HAF office around 1:00… The volunteers from OCP, the HAF team and members of the local association planting the first tree together In the front: a carob tree sapling - ready for…