On February 22 and 23, 2022, I attended the final Multi-Stakeholder Partnership Workshop in Marrakech and Youssoufia. One of the guests included Kerstin Opfer, a Germanwatch representative, HAF long-time friend, and former staff member. Another guest was senior energy advisor for Power Shift Africa: Amos Wemanya. University professor, state engineer, and key leader of the platform, Dr. Touria Barradi, was vital to this event. The presenter of the event was Mr. Said Chakri, an expert in finance for national contributions at “Coóperation Conseil International.”

Early on, some of the panelists mentioned their vision for 2035. Ideally, there would be a much better distribution of solar energy sources, better transport of goods, better infrastructure, along with adjusting the energy approach nationwide. Various speakers underlined the goal of the long-term durability of these projects.

Mr. Wemanya mentioned that he would approach building similar projects in Kenya, using the same techniques as with this successful project by HAF near the town of Youssoufia, accomplished with support from Germanwatch. Further, he made it clear that such projects should be expanded continent-wide to inspire communities to self-develop.

Later, Dr. Barradi led the conversation about the pilot project of Jnane Bouih, near Youssoufia. She stated that we would get to see how the proposed ideas translate into actions for this project. Decentralization, renewable energy, durability were goals of this project that were mentioned and achieved. Additionally, she made a statement on the difficulties such projects have to deal with: “It is a dance of economic as well as agricultural matters and battles that have to be overcome.”

Dr. Barradi continued with a presentation in which she highlighted the importance of education and renewable energy sources. In further detail, she remarked how high of a priority the children’s education in the project villages would be. They are the future local leaders, collaborators, and supporters of these projects. On the solar power aspect of the presentation, she remarked that these panels would provide energy nearly 365 days a year in Morocco with its peak energy sourcing in the summer months. Another interesting observation was that in Morocco, civilized places generally enjoy complete coverage of electricity, but unfortunately, the network for accessing drinking water is much less evolved. On a separate note, she commented that the price for photovoltaic panels decreased ever so slightly in the past years, whereas other energy sources rose in price.

Day two started with another inspiring talk of University professor Touria Barradi, who once again emphasized the importance of education for rural Moroccan children and teens to see a durable positive impact. The next speaker, Mr. Said Chakri, discussed both the visible and non-visible aspects of the project. As for the non-visible elements, he highlighted young villagers’ education and how much of a focal role the civilian population plays in the success of such a project. He signalized how dependent the success story is on the business plan elements. He stated the humanitarian and participatory approach, imagine workshops, and last but not least, the donors.

Dr. Yossef Ben-Meir started the conversation with big questions on the future of the collaboration with the partners just after the tea break. Should there be a replication of this pilot project? Should there be even closer, more extensive cooperation between the partners? What does the future look like? Minutes in, he mentioned that HAF is close to generating revenue with the carbon offset credits with the 15 nursery projects HAF is leading throughout Morocco. Miss Touria Barradi jumps into the conversation by saying that water is the essential bottom line for every such undertaking; everything else would be built up from water accessibility. Another essential remark she made was that these small-scale projects efficiently fight the continuing poverty rural Moroccans are facing up until this day. The pilot project has shown how many jobs such an undertaking provides to rural areas like the Youssoufia province. Besides the water aspect, sunlight in renewable energy is another significant aspect of building a sustainable, greener morocco. Lastly, she clarified that continuing funding is still essential for these projects’ future.

Ending the main talk, Ms. Opfer was questioned about her future cooperation after the initial phase ended. She stated that the HAF has been doing wonderfully in implementing the project, and Germanwatch is interested in continuing the support, especially as a helping tool to secure funding, even though she noted the importance of mobilizing local funding from ministries and agencies in Morocco.

All considered, it was a wonderfully planned and executed event that promised a bright future for similar projects throughout Morocco and the African continent. 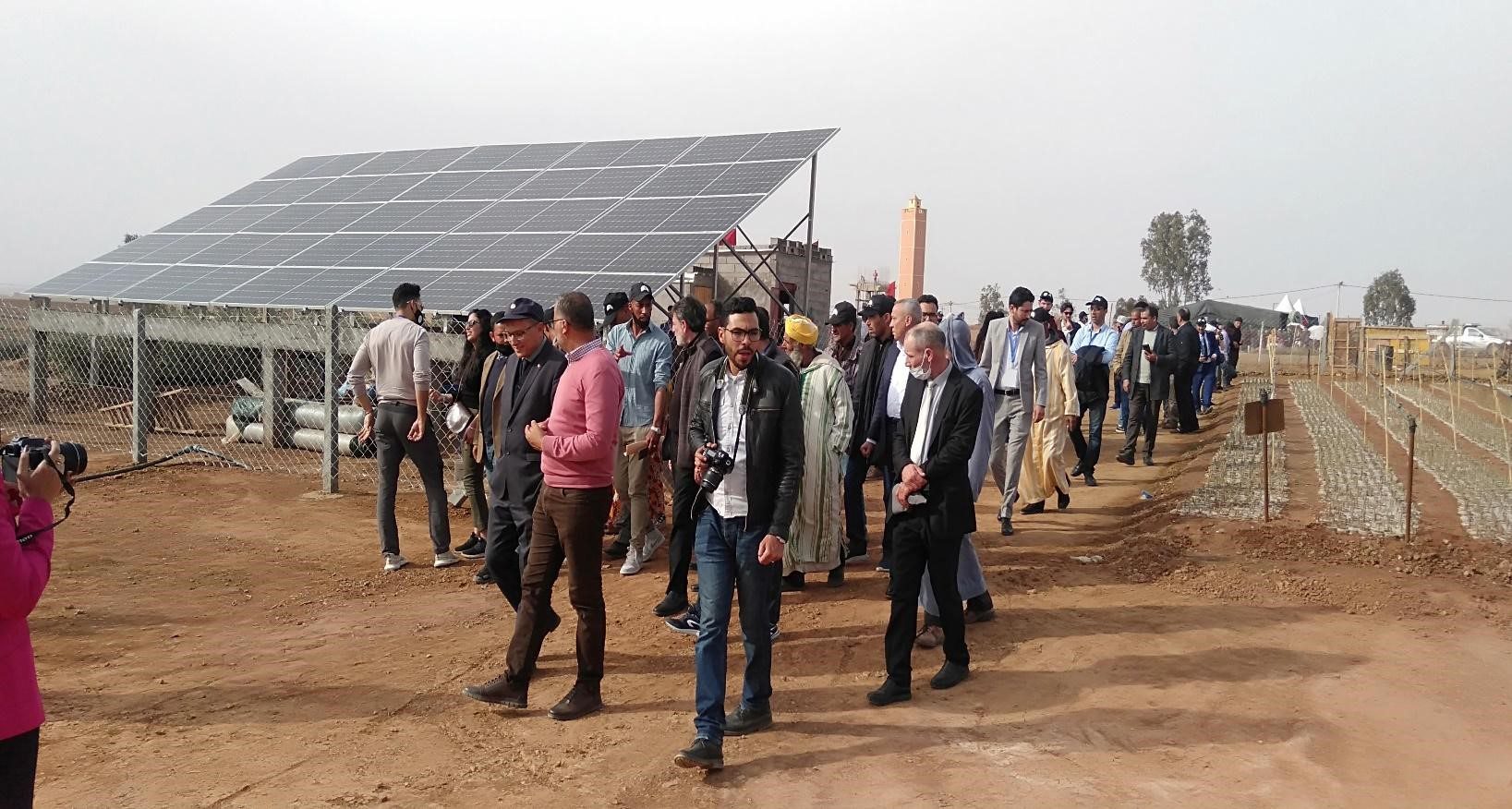