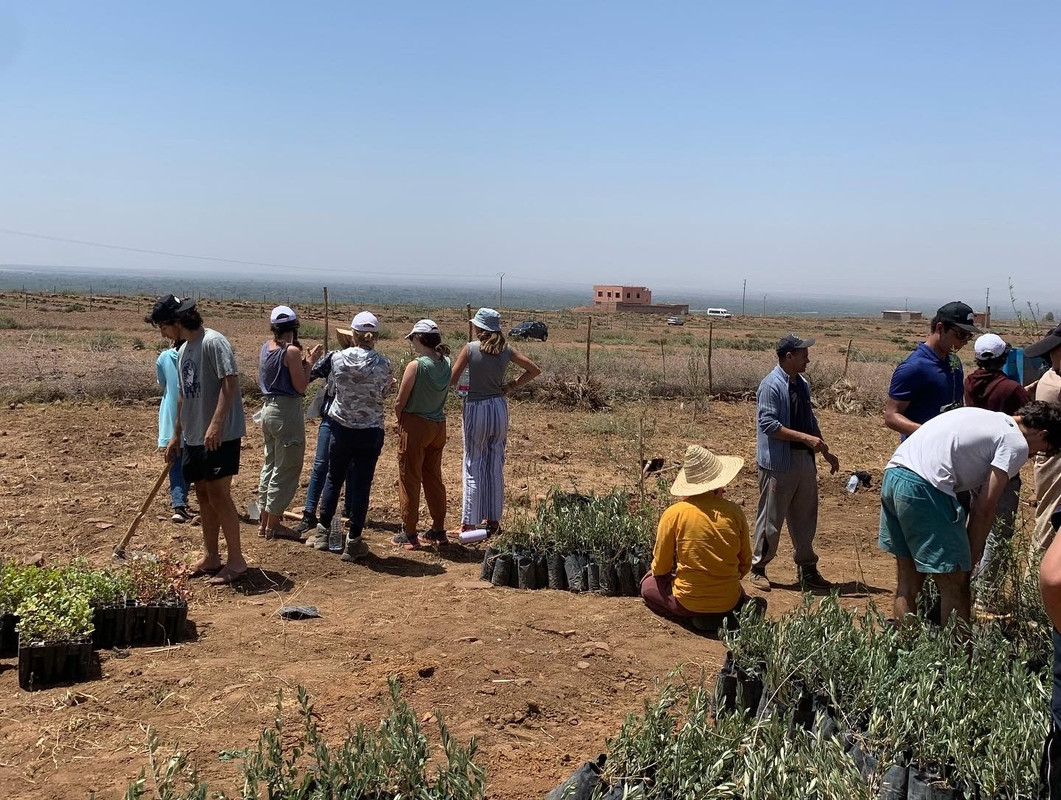 The community members and the HAF team unloading and organizing the tree saplings (credit: Ryan Winegardner)

There is a great horror and a curse that can sometimes overwhelm me while doing development work. It was maybe at its greatest when HAF visited Al Haouz province to plant trees with the community members: the beginning of a project to plant eighty thousand olive, carob, and almond trees, and water them all with solar-powered pumps. Halfway through the day, I stepped back from the work and just stood there and stared. It was a shadeless hillside over the valley that was all rock and dirt. The forty or fifty volunteers and community members were toiling against this landscape like a colony of little ants in the dust under the cruel and indifferent eye of the sun.

Back home, in Charlottesville, Virginia, it often feels like the sun is angry, like it is a malignant force attacking everything beneath it, but in Morocco, the sun is not even angry. It simply hangs fixedly overhead, a flat disc in a sky the color of shattered glass. There is no thought of resistance because it entirely dominates. All that can be done is to obey. And in the middle of that field, after planting trees for several hours, I was overwhelmed with anxiety over such a powerful force.

I looked out and thought about how long it would take to plant eighty thousand trees, and how it can take fifteen years for a carob tree to bear fruit, and how the global temperature is rising by something like two degrees Celsius, and rising and rising ever-faster, and I wondered with alarm what this hillside would even look like in fifteen years. Would it provide shade and comfort and protection? Would it be a paradise of carob and olive and almond? In fifteen years, would there be children running between the trunks? Or would it be a landscape still dominated by the sun? Would the trees wither and die from drought? How could a sapling that could fit easily in the palm of my hand — and be crushed in it — even hope to survive in this landscape? Would they be beaten down and dried out until only those that clung to the uphill shadows remained? Would not just the trees but even the shade be eradicated? Alone away from the tree planting, I had to suppress my nausea at the prospect.

I was reminded of a biblical passage: “Yet when I surveyed all that my hands had done and what I had toiled to achieve, everything was meaningless, a chasing after the wind; nothing was gained under the sun” (Ecclesiastes 2: 11).

I was reminded that this problem is not new, though it is so daunting that it feels insurmountable and world-ending to everyone who comes across it. It is the meaninglessness of building sand castles at the beach, knowing that the tide may come and wash it away. It is the meaninglessness that frightened even wise King Solomon in Ecclesiastes. Trying to make the world a little better can feel meaningless in the face of challenges that are monstrously crawling closer. The horror of development work is that you can work from dawn to dusk in the field trying to improve the world, only for this work to be erased as if by the spirit of some vengeful god.

Yet, alone there away from the tree planting site in Al Haouz, I found strength. I thought about the generations of authors who have written about meaninglessness. I remembered the Book of Ecclesiastes, I remembered the Buddhist texts I’ve read, and I remembered The Myth of Sisyphus, who is perpetually rolling that rock up that hill. Even more importantly, I considered my own experience in Morocco. I thought about the people I’ve met, the ones who live every day working tirelessly (through pain and resistance and doubt) in projects like this. I thought about those workers and volunteers and community members who will not bow even to the power of the sun, who stand up with pick and shovel and sapling and work every day.

These trees are not immortal, and this project will face numerous and overwhelming challenges in the future. We do not work to shape the earth for all of eternity. We do not work for some timeless monument; we work because the work is good. If there is even a tiny chance that these trees can improve people’s lives, that in a generation from now there will be children running in the shade of the forest we have planted, then we must work. In fact, we must not just work; we must travail.

Ryan Winegardner is an intern at HAF focusing on cultural heritage preservation and interfaith education. He is a student of anthropology and global commerce at the University of Virginia.

By Zoe Costello Figure 1: Jemaa El Fnaa at Night, Photo by Keely Fitzimmons, UVA student and HAF intern One of the most iconic sites of Marrakech is…

A lesson from the farmers and trees of the al-Haouz province By Livie Nute, HAF-UVa student volunteer Grafted Carob Sapling, Photo by Livie Nute Never before had I…