My Identity, My Origin: A Personal Reflection on Sustainable Development 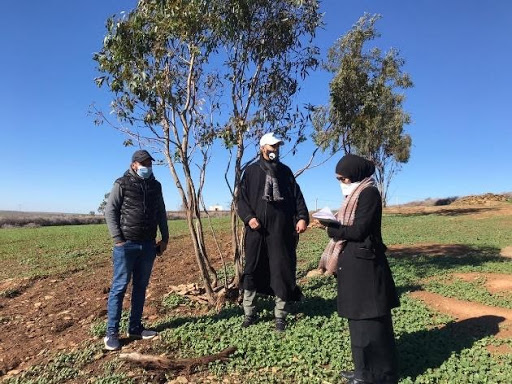 Nothing stops the pen from reaching its goal, for the book is written entirely in their hearts. Nothing stands between it and them; they put their hearts into it and fill in what they feel, dictating simply and clearly. It is a book of their indivisible identity, of their intellectual, practical, and cultural life.

They are people who may be dominated by silence, but once they open their hearts, they enjoy the pleasure of an interesting dialogue full of judgment, a dialogue proud of their identity.

It is, in every sense of the word, an identity that distinguishes them in heart and soul, spirit and body.

On January 12, 2021, the Farmer-to-Farmer team went to the Rhamna Province in order to develop new lines of work to empower agricultural cooperatives in the region. We spent a day in the desert, a day that will inevitably remain immortal in memory.

Looking out and around, you will find greenery from every direction, a vast land adorned with some olive trees and cattle grazing on one side and bordered on another by impressive stone buildings.

In a beautiful, bright atmosphere, Mr. Yassin Ghoufran welcomed us with joy and pleasure in that fertile land located in the community of Bhushan (Douar Lakhtakhtta). He introduced himself to us, and we learned that he is an old classmate of Errachid Montassir, a project manager at the High Atlas Foundation, who is from the same region. The flower of this friendship bloomed anew.

Yassin continued, expressing his strong desire to plant more olive trees on his land, which has an area of ​​about six hectares and contains a well. However, as his water supply is not sufficient, Yassin is considering drilling another well with a solar water pump system. 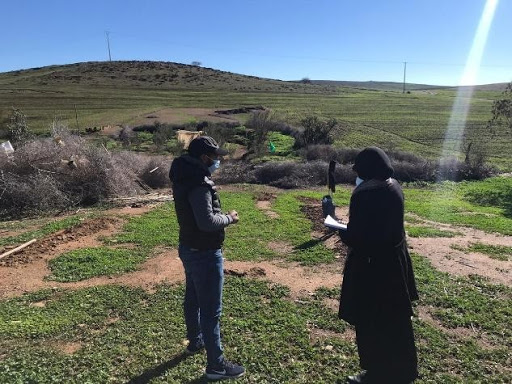 After a moment, he began to talk about the family cooperative that he would like to establish, which will focus on raising goats, an activity characteristic of the Moroccan desert. He is prepared for this, as this area was and still is important for animal production.

Here, his father Abd al-Khaliq Ghufran appeared, walking towards us wearing Moroccan robes and with a tightly wrapped desert turban on his head. He greeted us again and then welcomed us into their spacious home with beautiful stone architecture to talk more about their idea of fostering desert culture by creating this cooperative.

Abd al-Khaliq began with the story that told of the connection of their rope braid to the Moroccan desert. He told us in one of the rooms of his house; however, the story took us in its unique way to a desert tent, to the bedding and traditional utensils, and the tea prepared with gum extracted from a tree. Abd al-Khaliq said with a nostalgic smile, “Our ancestors were one of the desert tribes whose lives were dominated by a passion for travel, and the Rhamna province was one of the regions most beloved to their hearts. Since then, we have developed a close relationship between the people and the desert.”

His son Yassin continued, “This history constitutes for us the desire to revive the activities practiced by the desert man, in the light of the cooperative project. Our first step is to raise goats, but our future goal is to promote several agricultural desert products.”

After several discussions, Errachid informed them of the need to set priorities with a clear strategy so that the programs offered by the Farmer-to-Farmer Program would benefit the cooperative and the Rhamna area.

We then went with Mr. Yassin directly to meet other cooperative members, a surprise that defined the day – a day of prestigious academic fellowship, a day of the people of the desert.

Mrs. Lubna Aqil, head of the Joud Labrikiyine Cooperative, welcomed us with a spirit that left our hearts desiring to hear many stories. She is a young woman who is also a classmate of Yassin and Errachid. She left her stable work in order to devote herself to fulfill her childhood dream and the dream of her father, who had always supported her – the dream of raising the first desert animal, the camel. As we continued to talk about the origin of the idea, we learned from Lubna that her origins are from the Moroccan Sahara; her ancestors were from the desert regions and eventually settled in Rhamna.

Soon enough, she told us about the details of the formation of the cooperative, which had been established only three months prior. To our surprise, the members had purchased 15 camels that were transferred to the cooperative’s land in the Braikis community (Azeeb Aqil), which covers an area of ​​fifteen hectares.

We continued to talk until Lubna confirmed that the cooperative’s activity would be enhanced through its engagement with the High Atlas Foundation. It would benefit from 1,200 diverse fruit trees planted on a plot of 15 hectares of land, as well as from a detailed plan of action and training programs supervised by a volunteer expert from the Farmer-to-Farmer Program.

In this way, the “presence of the Braikis,” as they called it, will inevitably exist in the Rhamna region through the camel breeding project, which defined the lives of the ancestors of the desert inhabitants and was a source of livelihood, a symbol of distinction, and an important foundation to address life’s challenges. 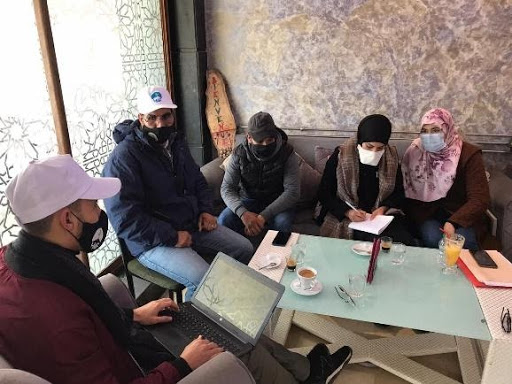 The F2F team discusses with Joud Labrikiyine Cooperative their needs.

Always aiming to advance the area of ​​Rhamna, the youth of the Cooperative Falah Rhamna in Sidi Bou Othman are working to improve knowledge and technical skills in the agricultural field through consultations with farmers. They see through the eyes of the farmer what practices and technologies are needed in order to offer tailored help. Despite the difficulty faced by the cooperative in obtaining land, the three goals that they expressed to us exhibited an undeniable radiance.

The cooperative wishes to cultivate alternative crops, specifically of the Panicum variety, to produce feed to farmers and livestock breeders in Rhamna instead of having them buy these plants from outside sources at costly prices. They also want to garden flowers and ornamental plants, which are scarce in the region, and plant fruit trees to promote sustainable development.

In light of all that has been discussed with the members of the cooperative, headed by Mr. Zakaria Qarbawi, we concluded that they also urgently need a plan of action to guide this future project. 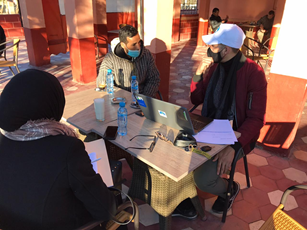 We passed our day with these people, reading together some of the lines from their identity book and observing the close integration and harmony that they have achieved. The Rhamna Province has adopted identity as a basis for moving forward, progressing. This is demonstrated by the youth’s inspiring slogan: “My identity is my origin.” 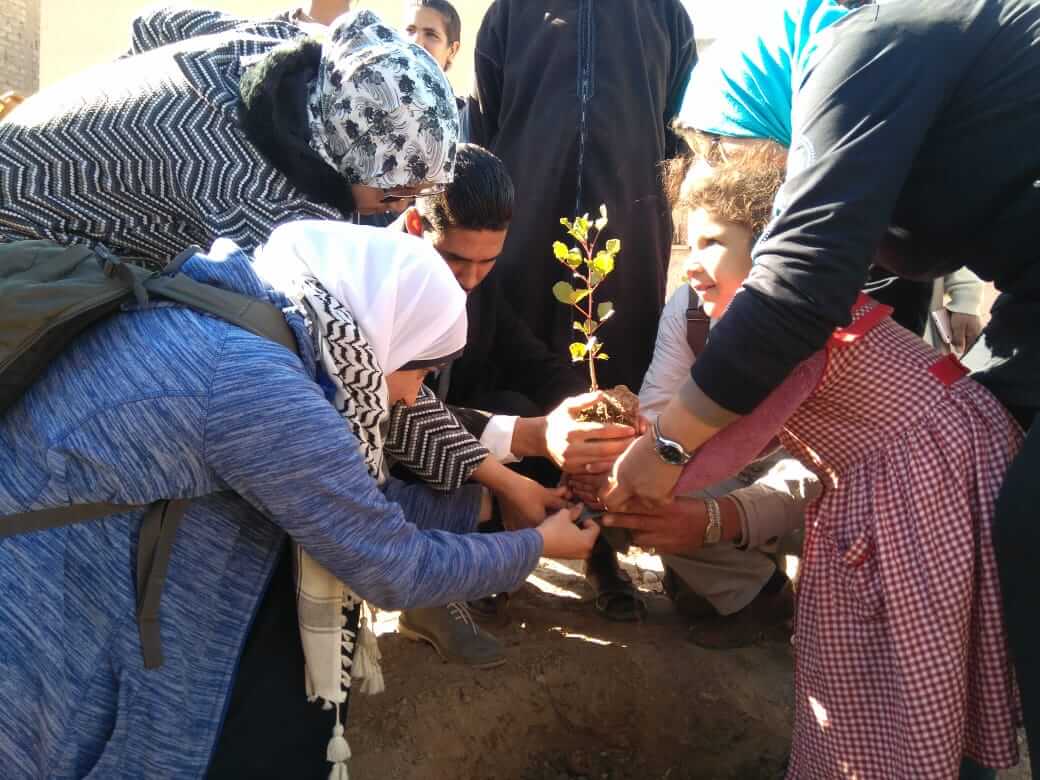 Making the Farmer King: Why Fair Trade Is a Big Deal

Making the Farmer King: The Need to Shift Our Approach to Agriculture, Morocco World News. By Olufunmilayo Aiyegbusi The Hague, Netherlands Looking through my grandfather's diary 25 years… Female Empowerment as the Key to Moroccan Development

Female Empowerment Can Drive Development in Morocco, Morocco World News. By Molly Case Charlottesville, Virginia Despite its international reputation as a reformist country, women in Morocco continue to…