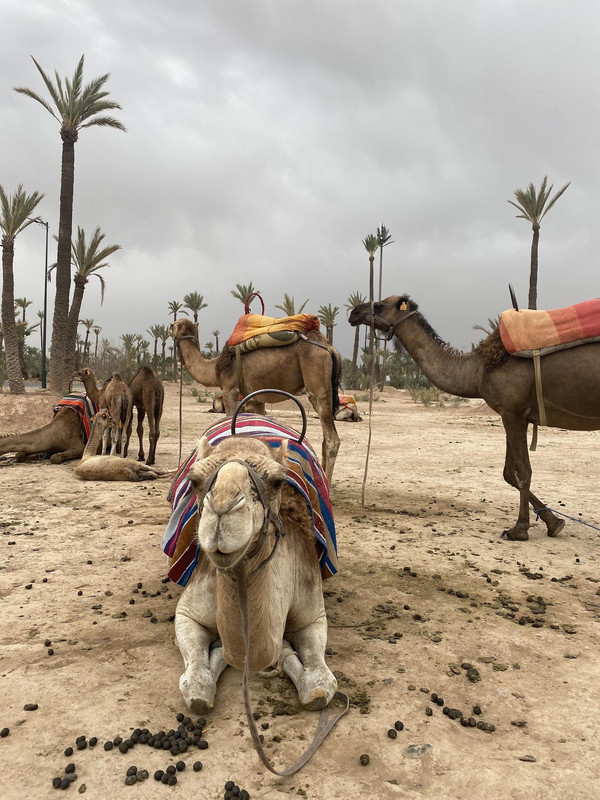 Camels tied to the ground, Photo by K Cashman, HAF

I rode a camel for the first time the other day. I was expecting something magical, like a scene from a movie in which camels run through a vast desert with no roads or buildings in sight. The activity post advertised itself as a “camel ride at sunset” through “a palm oasis of several hundred thousand trees”. Unfortunately, that was not the case. The first thing that hit me as I exited the van was the smell. Camel poop was everywhere, and camels were tied down so tightly that they had to lay where they pooped. Then came the sounds. I do not know what a camel usually sounds like, but the sounds that reached me from the camels sounded so heart wrenching and despairing. I felt a tugging in my soul and all I wanted to do was hug them, to apologize to the poor creatures for the fact that they were forced into this existence simply because of the silly desires of tourists like me.

The feeling only deepened as the guide beckoned me to climb atop the camel’s back. As I approached I saw the matted fur, areas of their backs worn bare by the constant rub of the saddle ropes. When we had all successfully mounted the camels, the guide began our ride. But the camels were not free to walk where they pleased. They were tied together in a line, the rope so tight that the head of the camel behind was constantly bumping against the back of the camel in front. Baby camels ran alongside the line, trying every once in a while to sneak a sip of milk from their mothers. I thought it was cute at first. I took pictures of the babies walking and laughed as they tried to eat the sandal off of Keeley’s foot. Then the guide said something that pulled me quickly from my bubble of amusement.

The babies are not tied because they need to follow their mothers for milk. In doing so, they are also being trained to give rides. Once they were grown enough, they would be tied to the ground and saddled and forced to give rides. One of the babies was only 35 days old and was already being trained. Some of the camels we were riding were pregnant, growing future generations of camels that would be forced to tread the same barren path as generations before them.

I understand that I was supporting the livelihood of those guides. I also feel that some livelihoods do not deserve to exist. If they cannot afford to put some of the money that they are receiving from tourists into improving the conditions of the camels, then they do not deserve to profit from those camels. They could invest in saddles that do not rub so harshly against the camels backs, better food for the camels, or a large fenced enclosure so that the camels can roam between rides instead of being tied to the ground. At the very least, they could take the time to sweep away the poop from the small radius of rope in which the camels are forced to exist.

In a way, the condition of the camels is similar to that of humans. Generations of children follow the lead of their parents, ending up working in the same job and living in the same place years down the line. In the case of both the camels and humans, there are outside forces working to keep the children in their place. Often these forces vary depending on the resources into which a child is born. For those born into wealth, the forces can be primarily societal pressures or familial expectations. Children can be expected to carry on the family business or to become a doctor or lawyer because their parents are doctors or lawyers. For those born into fewer resources, the forces can come from everywhere. They have to work harder to achieve the schooling necessary to break out of the cycle. They have to compete against the fact that almost every institution that is needed to acquire wealth requires wealth. In both cases, the continuation of the family cycle can be a choice, where children grow up idolizing the work of their mothers and fathers and wishing to one day grow up to be just like them.

For the camels, however, there is no choice. And the pressure keeping them in place is us.

Purpose Driven Companies and the Regulation of the Fourth Sector: Morocco Case Study

By Timo Reinitzer, HAF Intern “The demand for social services is here but the resources are not abundant so the need for socio-economic and ecological change is high,…