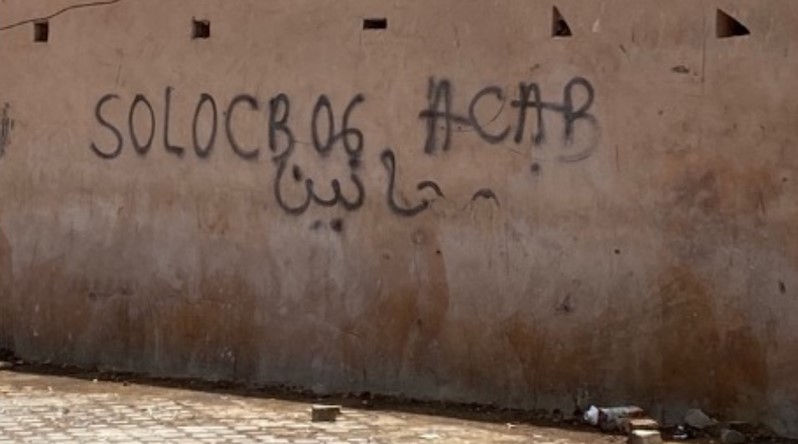 The acronym ‘ACAB’ spraypainted on a wall in Marrakech, Morocco (Photo supplied)

Distrust in police institutions is an international phenomenon. Walking among the streets of Morocco, one may notice the occasional wall with the word ‘ACAB’, an acronym standing for ‘All Cops Are Bastards’, scrawled in graffiti. With France’s ACAB movement having some roots in the police’s practice of ethnic profiling and America’s take on the movement based on systemic discrimination against People of Color, particularly Black men, poses the question of what Morocco’s ACAB graffiti hints at for a change. With only 3/100 women survivors of sexual violence seeking help from the police in Morocco today, a culture of normalizing the marginalization of women in public spheres, paired with the only somewhat constructive religious and political efforts made by the Moroccan government, shine a light on the socio-political issues in Morocco.

With the gender inequality index of Morocco being .45 as of 2019, the physical, psychological, and economic violence placed upon women is affirmed. Men’s negative view on women develops in public and familial spaces, in which an association between womanhood and disgust is formed. In this way, attacking women through verbal or physical means is, according to Violence against women in public spaces: the case of Morocco, “a way for men to prove publicly their virility and dominance over women and space”. In public settings, women’s movement is repressed when facing sexual, psychological, verbal, and physical assault outside the house; and in an institutional sense, women are more likely to experience identity checks by the police. This type of oppression allows the normalization of stripping women’s rights. Women feel this cruelty all their life — when asking a single mom in college living in Beni-Mellal about when she first realized the restriction of her movement in public spaces, especially at night, she responded “Always”.

Despite the seeming omnipresence of police in Morocco, as seen through the police checkpoints held all over the country by traffic police, only 8/100 women who experience domestic violence report the incidence to the police. This issue of not filing complaints is twofold: societal shame of being divorced and the fear of being blamed by police for the incident. Oftentimes the female survivor is the one blamed for cases of violence. In some cases, the woman is ignored or placed under a travel ban, while in others she is considered hysterical and can have her job put in jeopardy. Furthermore, due to the #MeToo movement, the vilification of women for coming forward has infiltrated the subconscious of Moroccan minds. In fact, only 1/10 women survivors globally come forward to the police about their abuse, but many withdraw their reports because of poor police response. Allegations, by use of politics or power, determine how respected a reported incident will be.

Although culture and religion stand as chief tenets upholding Moroccan society, efforts in those spheres advocating for women’s rights have proven to be only slightly beneficial in the arena of gender-based violence. In Article 51 of Morocco’s Family Code, the Qur’anic teachings preach the importance for both spouses to share a number of obligations, including cohabitation, family rights, and fidelity. Due to Morocco’s patriarchal society, the religion of Islam is often manipulated by men to their advantage and pleasure – relinquishing women their rights. Instead of interpreting the text as a sign of mutual respect and collaboration in the private sphere, men tend to believe that, under pretense from the religion, that women must have sexual intercourse with the man, no matter what consent or lack of is involved. Although parts of the  Qur’an proclaim the equality between women and men, as well as the retribution of men who oppress or harass women, Muslim scholars today believe that women who attempt to deny sexual intercourse with their husband are cursed.

King Mohammad VI’s response to the religious manipulation degrading women’s rights proved only somewhat constructive. In 2004, the King adapted the Family Code, known as the Moudawana. This text conveys that women have rights to self-guardianship and divorce, while also ensuring the legal punishment of those who sexually harass women. In 2018, another law was added that made aggression and sexual exploitation of women illegal, known as Law 103-13. Despite the seemingly favorable nature of the law, the code did not change the Penal Code provision on rape, including the acceptance of marital rape. In response, the reporting rate of filing incidents of violence against women remain 1 in 10.

After Law 103-13 was launched in 2018, the General Directorate of National Security, with the help of UN Women, planned a program with the goal of preventing, protecting, and responding to women’s violence and inequality. The program, titled “Improved Prevention and Responses for Women Victims in Morocco”, restructured the Police Units for Women Victims of Violence at every principal police station in Morocco from December 2019 to April 2021. According to the chief of the Casablanca Prefectural Police Unit for Women Victims of Violence, the most difficult part of a woman’s process of experiencing violence is reporting to the police. Therefore, in this agenda, the partners organized and executed the training of 160 magistrates on Law 103-13, supported 20 non-governmental organizations in awareness-raising, as well as the training of police on survivor-centered and trauma-informed approaches. The Police Units for Women Victims of Violence were trained how to listen, refer, and record cases to make the experience of coming forward to the police for help as beneficial and comfortable as possible. During the COVID pandemic, 24-hour toll-free helplines were installed and online court sessions were implemented to continue service for women facing violence during unique times.

Despite action from the General Directorate of National Security and UN Women, as the COVID pandemic swept throughout Morocco, many women isolated in their homes with their oppressor, as 46% of women state that the domestic environment is the most violent space for them. With this circumstance, gender equality and women’s rights severely deteriorated, with 1 out of 4 women experiencing physical violence during the peak of the pandemic between May 2022 and April 2022.

Though political and religious efforts have been made by the King and members of the government, great strides are still necessary to be taken in order to allow women to finally leave the cycle of violence and exercise their rights. In 2020, at least 57% of Moroccan women have experienced some type of violence, with 9% of those being 12- to 17-year-old girls. In addition, many women fear coming to police after they experience rape cases outside of marriage due to the criminal and taboo nature of having sexual intercourse outside of marriage. Women continue to be demeaned for coming forward under religious and cultural reasoning, while police also remain dismissing cases of violence against women. Evidenced by these statistics, more change in regard to police conduct is necessary to end gender-based violence in Morocco. Because coming forward to report acts of violence is the most difficult step for women, building trust in police is a significant area of interest when reforming the police, which would thus aid the prevention of crime and build up community safety. Professionally instructing all police officers through intensive training on trauma-informed care and referrals to psychosocial services will coax women to report abuse. Furthermore, the media should be more transparent, offering information on both the triumphs and feats of police handling with survivors.

Religion, police, and culture are all factors of Moroccan society that influence women to avoid seeking justice after experiencing violence. Changing cultural stigmas and religious interpretations is difficult to accomplish, but regulations and laws are more malleable. Gender-based violence, paired with female distrust in police, is a phenomenon not new in Morocco. Aiming for the reformation of police to be more community-oriented, and thus building a relationship of trust between institutions and people, is the first step of possible change in the arena of women’s abuse in Morocco.

Sabine Stratmann is a student at the University of Virginia and an intern at the High Atlas Foundation in Morocco. A lesson from the farmers and trees of the al-Haouz province By Livie Nute, HAF-UVa student volunteer Grafted Carob Sapling, Photo by Livie Nute Never before had I… 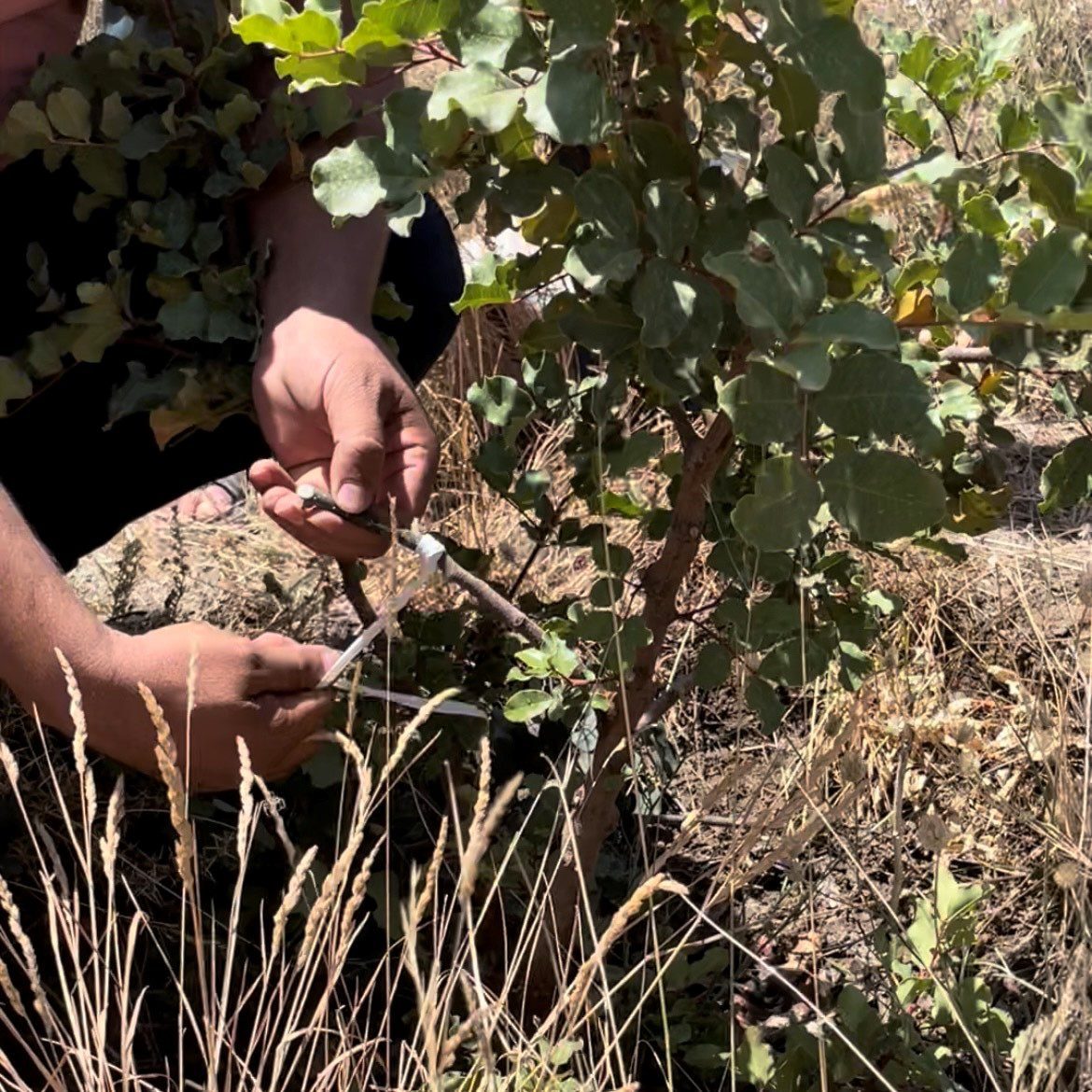