Morocco: One Farmer’s Struggle for a Better Life

Conducting interviews with farmers across Morocco has left me in awe of them.

Take for example twenty-three-year-old Najib Charhabili, who received his BA in Arabic last summer from Cadi Ayyad University, Marrakech.  He hails from the town of Zagora, where his family owns a small field of date palms.

The area around Zagora is very poor, dependent primarily on farming.  Aside from dates, crops include wheat and barley as well as almonds, the latter only for local consumption.

A small percentage of income is derived from tourism, with hotels benefitting from the tourists who visit the Drâa oasis, the desert and nearby Kasbahs.  Jobs have been created in this way but in general, high unemployment levels force local people to migrate to big cities such as Marrakech, Casablanca and Rabat.

All of this negatively affects agricultural production around Zagora; nobody wants to work in farming and thus if a farmer wishes to hire labour, he needs to be prepared to pay a higher than normal wage.

This is the place Najib calls home; he asserts affectionately that working on the farm as an undergraduate did not detract from his studies.

He is the sort of easy-going, enthusiastic person  with whom it is a pleasure to talk.  ‘My experience in agriculture is really good, especially with regard to growing dates’ he says.  He was very happy to be interviewed and gave me so much detailed information about date palms that I was overwhelmed!

When I called on Najib, I found him working in the field with his brother, using the pollen from male date palm flowers to pollinate flowers of female trees.  ‘When I was a kid I used to be with my grandfather and this is how I learned how to pollinate palm trees,’ he enthused.

At harvest time, from October until early December, the date palms are pruned.  This benefits the trees by allowing them to receive more sun and thus produce a better harvest in the coming year.  In March smaller trees are hand pollinated (if a date palm is 20 meters or more in height, fertilization of the female trees takes place naturally through air pollination).

Dates in the Zagora region are of high quality and Najib’s family produce different kinds.  Majhoul are the best and most expensive, followed by Fekkouss.  These two are fresh varieties but Jeehl and Bouskri are dry.  There are other types as well including Elkhalt, Bourar and Tamakrins, all of which go under the name of Essayr.

Production is small; one Majhoul palm yields around 70 kilogrammes of dates annually, since the dates are large.   Najib’s family owns six of this type – the majority of their trees are of other date varieties, which yield about 20 kilogrammes of fruit each year.

In all the family own 9O palm trees but only 50 of these yielded a harvest last year owing to lack of water.  In addition, date farmers are faced with Bayoud disease, that kills more than 60 palms each year through fungal infection.  Across the board, little support is provided to sustain this enterprise – laboratories and botanic studies are required, as well as increased training in growing trees from seed.

The other local farmers I interviewed grow different crops and share the same fundamental problem as date growers – they only know of very basic value added opportunities, such as pressing olives for oil instead of selling the raw crop. Agriculturalists across Morocco need to be informed of more advanced opportunities, such as infusing herbs in olive oil for massage purposes or extracting pomegranate juice.  Development organizations need to be in place to support them in setting up and pursuing more complex and potentially lucrative opportunities.

In addition, lack of adequate transportation means that the desire of almost all farmers to sell their crop directly to factories without recourse to a middle man (and thus gain a higher price) cannot be met.  This situation is particularly acute at harvest time, when prices fall owing to the glut of produce.  Once again, organizations can help by providing financial or practical support.

Finally, some farmers are hampered in their occupation owing to their family responsibilities.

As for Najib, he wishes for a small piece of land on which to plant and tend Majhoul dates and says he would have no problem sharing the work he has loved since childhood with a fellow agriculturalist.  Fulfilling this dream would provide a good source of income for him and his family, allowing him to support his younger siblings in the continuation of their studies.  A young person, Najib would like to start his own, small family but owing to lack of money, this too is likely to remain a mere dream for some time to come.

Ahmed Ouajib was one of twelve students from three Moroccan universities working with marginalized farming communities as part of a project ‘Fostering Green Start-Up Opportunities for Rural Moroccan Families’ that took place between April and December 2015.  This High Atlas Foundation project was one of the recipients of the United States Embassy Open Grants Competition.

Supporting the Kingdom of Morocco 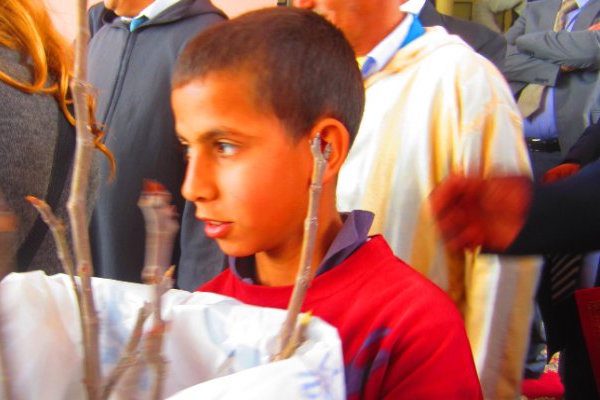