Moroccan Innovation and the Journey to Solar Vehicle Races 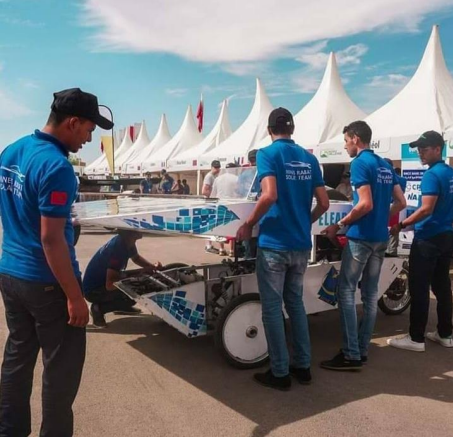 “If you want to find the secrets of the universe, think in terms of energy, frequency and vibration.” ― Nikola Tesla

The Kingdom of Morocco has a reputation for its diverse climate and natural resources, among which is solar energy. In fact, Morocco hosts the world’s largest concentrated solar power plant, the Noor Complex Solar Power Plant, which is located in the Sahara Desert. These factors make the Kingdom a hub for research and development.

The students at the School of Mines of Rabat (ENSMR) have begun a new innovative project, the objective of which is to develop an efficient car that uses energy from solar panels. Created in 2014, Mines Rabat Solar Team, the group designing the car, is composed of engineers from various fields, such as industrial engineering, electromechanics, energy, and IT. Since then, prototypes have been created. After conducting trials on the first prototype “Fennec”, the team realized that it did not meet its expectations. Consequently, they have produced a second prototype called “Eleadora 1.” Then, the last prototype, “Eleadora 2,” was developed. This car is made from carbon fiber, which makes it rigid and light. It can reach a speed of 120 km/hour. The solar panels used for the car are monocrystalline solar panels. They are characterized by their efficiency, which can range from 17% to 22%. The silicon-made solar cells are long-lasting, with a 25-year warranty.

Mines Rabat Solar Team participated in the Moroccan Solar Challenge in 2016 and 2019. This event is an annual car race between the cities of Ben Guerir and Marrakech. The team took second place in the race. And will be in attendance at the first edition of the solar challenge Morocco, held in Agadir this year.

The team is also expected to participate in one of the most renowned competitions, the  Bridgestone World Solar Challenge. This Australian race, created in 1987, is for experimental vehicles powered by solar energy.

The High Atlas Foundation appreciates the innovation demonstrated by these students toward the advancement of renewable energies in Morocco.

So far, three of HAF’s nurseries are equipped with solar water pumps that water the tens of thousands of seeds planted. They also provide clean drinking water to local communities. This results in a 100% eco-friendly process that produces fruit trees by avoiding all the tools that might worsen the state of the planet by adding more CO2 to the air.

Mustapha Taghbalout, Project Coordinator Given the added value that decentralized renewable energies can bring to Morocco's contribution to the field of green energy, a pilot project in the…