Moroccan Doors: A History of Humility and Heritage

Lede: In Morocco, most doors shed light on the country’s past and present. 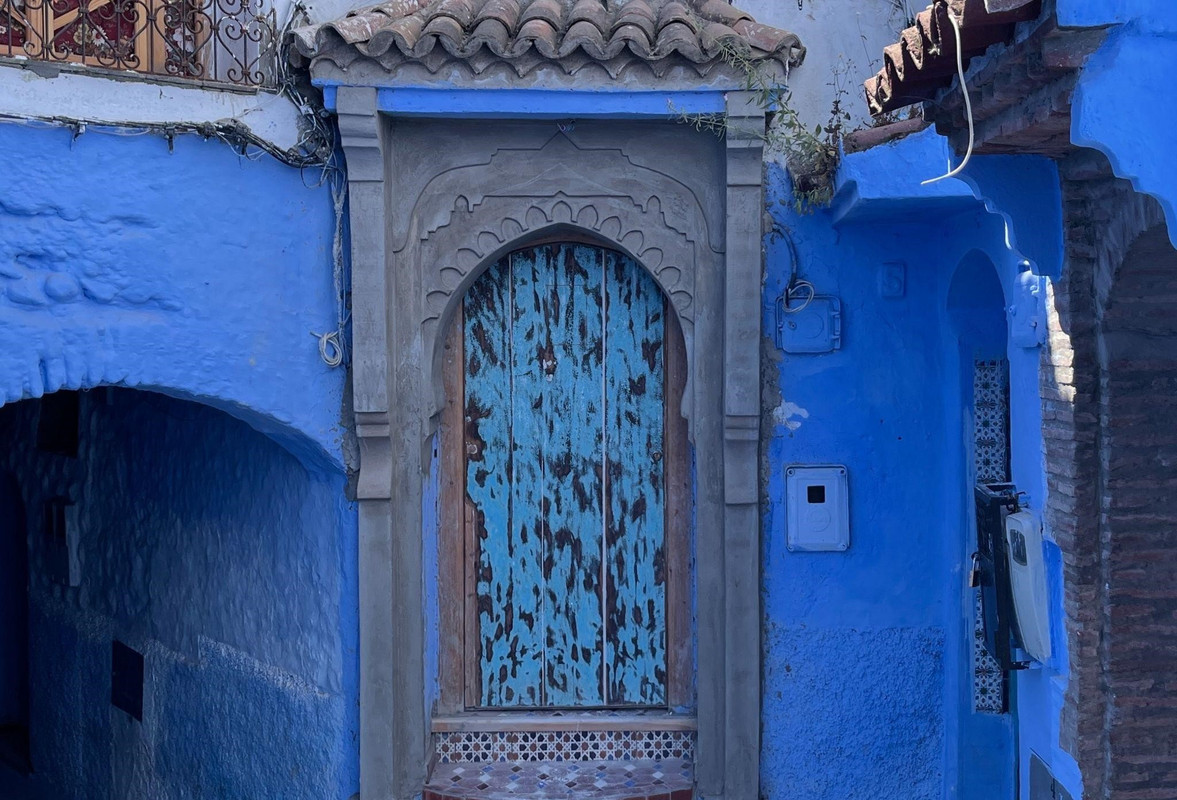 Gazing at doors in Morocco is like time-traveling into the depths of Moroccan history. In medinas as well as the newer areas of the cities, both modern and centuries-old doors line the streets. Differing in their shapes, colors, and designs, doors adorn Moroccan buildings – each one unique and holding its own story.

Stepping closer, one notices the intricate designs and wonders at the meaning behind each door. Although their cultural significance is often overlooked, every door reveals a different aspect of Moroccan heritage. Whether they illustrate the history of invaders, rulers, or ways of life, the many doors of Morocco shed light on the country’s past and present.

While some doors are decorated with intricate zellig tile work or an array of hues, almost every door shares the characteristic of the horseshoe arch, which was initially designed for architectural stability. This classic Islamic stylistic preference hints at an era of Moroccan history: the 11th to 17th-century arrival of the Moorish people from Spain, who introduced this arch style to the North African country.

This historical arch is still seen in many entryways of Morocco, illustrating the country’s strong cultural foundations. Throughout the centuries, these deliberately carved arch shapes have been called the keyhole arch, regular arch, and Moorish arch.

History of Virtues Behind Moroccan Doors

In the medina, cats loll in front of the many entrances, seemingly unaware of the doors’ backstories and origins, both humble and grand. These doors, wedged between shouting marketplace sellers, are often quite short.

Other entryways are enormous and complexly patterned yet have a discrete smaller door carved into the larger one. These short doors, as well as the entryways consisting of a door within a door, were crafted to instigate respect.

Reflecting the Islamic virtue of humility, the height of the doors requires a person to bow their heads as they enter the house, thus offering respect to the owner. Some of these doors further exemplify the cultural value of respect by sporting two different knockers which emit a contrasting sound.

One noise denotes that a man is knocking at the door, while the other indicates the presence of a woman. Traditionally, the differing sounds allowed a man who was home alone to refrain from opening the door if he heard the knock of a woman. The architectural designs of the knockers and the height of the doors enabled visitors to practice respect and humility, which continue to serve as significant tenets of Islam. 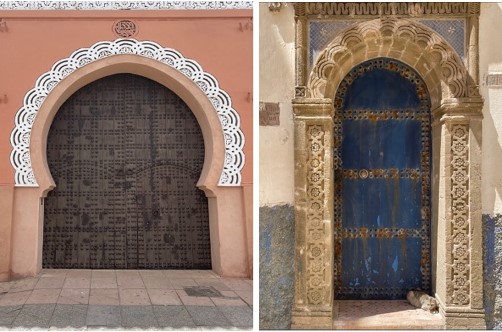 The architecture in Chefchaouen, nicknamed the “Blue City” for its bright blue walls and doors, further displays humility and respect. Significantly, the color blue is often used in Moroccan doors to symbolize the Islamic value of the sky, heaven, water, and the planet Mercury.

Beyond the bustling tourist hotspots of the “Blue City” lie plain doors devoid of any extravagant designs. Many doors are almost dull, bearing no designs or apparent craftsmanship. The bareness of these doors, however, is strategic. By rendering the entryways devoid of intricate design, it becomes impossible for people to determine the wealth of each home’s owner. The unassuming exteriors thus support the Islamic virtue of equality under God.

In a more practical sense, however, these doors reflect the land’s environment. Due to the frequent heat, wind, and sandstorms, the plain, solid exterior ensures the endurance of the inhabitant’s doors and respects Chefchaouen’s environmental needs. 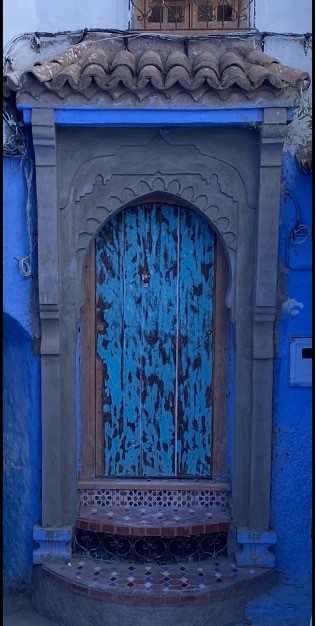 The doors in Fes and Rabat similarly illustrate Moroccan history and culture. In Fes and Marrakech, for example, the design of the doors commemorates the history of Jewish and Muslim coexistence in cities. The Jewish stars that appear on the entryways, for instance, demonstrate Morocco’s history of cultural cohabitation.

In Rabat, the doors further embody Moroccan history by reflecting both colonialism and traditionalism in Moroccan culture. The Medina of Rabat mirrors its traditional cultural roots in its doors’ ornamentation, as the city’s traditionally wooden doors remain both timeworn and elaborately designed.

As woodwork is a key craft in Rabat, many doors are composed of cedar, painted blue, yellow, or dark red. In Central Rabat, however, Moroccan traditionalism fades and a reflection of French colonialism influences the stylistic designs of its doors. Here, the entryways are not Moorish in color or design but rather host a royal and conservative likeness.

These modern doors are often yellow or white and lack the traditional markings of a Moorish door, hinting at Morocco’s past as a colony and the implications of such a past on its present architecture.

Throughout Morocco, each door holds a different story and design that reflects Moroccan values and culture. While some doors are signs of the Islamic values of humility and respect, others shine a light on a past of colonialism and cultural cohabitation. Although some doors might be more hidden than others, by looking a little closer, there arises an opportunity to travel into the depths of Moroccan culture.

Sabine Stratmann is a student at the University of Virginia and an intern at the High Atlas Foundation in Morocco.

- Triangulating Peace: How a Synagogue Can Revitalize the Jewish Identity in Interfaith Morocco, The Paradise. By Addie Simkin Photo of the Church of the Holy Martyrs and…

Sharing Across Languages: A Reflection of Dialogue between UCA and HAF

By Grace Gray, HAF-UVa student intern Rabia, Amit, Kaoutar, Grace. For the first few minutes of our conversation with law students from University Cadi Ayyad this June, these…