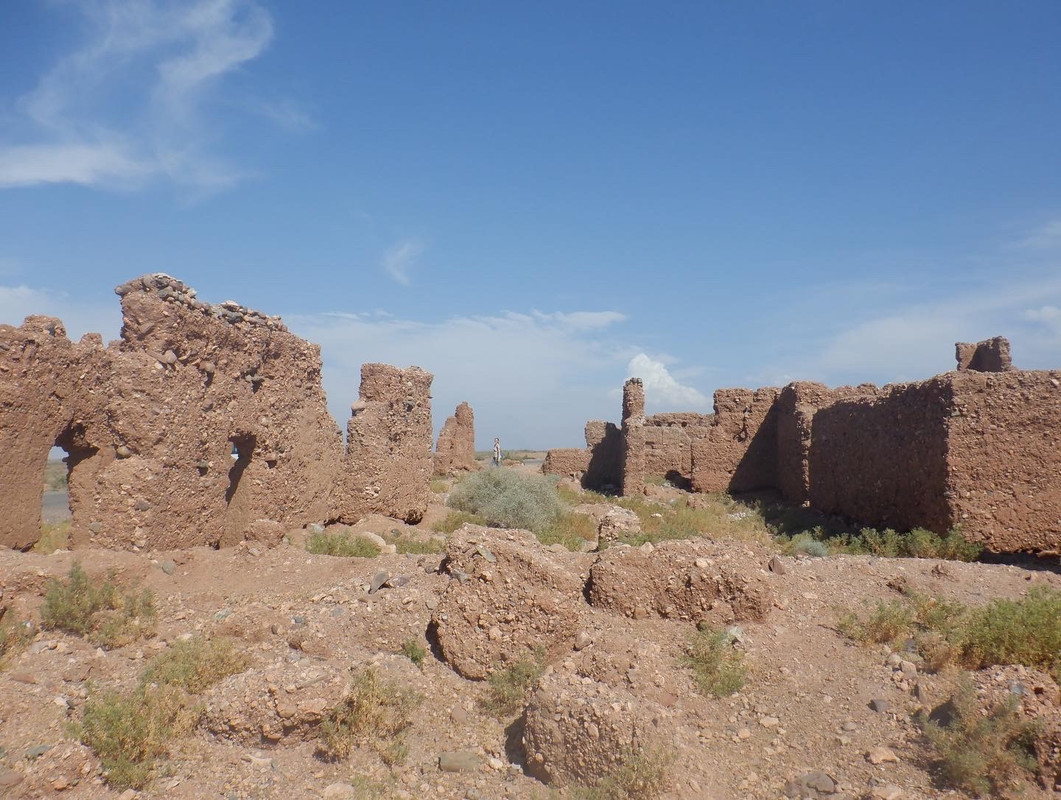 When the High Atlas Foundation (HAF) team took the University of Virginia interns to Akrich, it was the first time we had left the red walls and palm trees and cool avenues of Marrakech since arriving four days previously. Compared to Charlottesville, it was a landscape enveloped in the wind and the sun. The hills rose and fell and the Atlas mountains towered in the distance, but it seemed there was nothing separating Akrich from the sky above.

After we got off the bus, the Muslim guardian of the Jewish cemetery met us and retold the story of the cemetery. It was here that Raphael HaCohen, a Jewish saint, had died seven hundred years ago. A shrine was then erected in his honor, and a cemetery followed. Here, the guardian’s grandfather, and his father, and finally the guardian himself have maintained the shrine for the Moroccan community. While the cemetery is reserved for Jewish people, the shrine was not a site maintained just for them but anyone who came to visit and pay respects. But when many of the Jewish-Moroccans left for Israel in the 1950s, their sites began to be forgotten by the broader community. So this shrine, under the Muslim guardian’s care, was re-dedicated as a place of pride for Akrich when HAF partnered with the Moroccan Jewish Community to establish a tree nursery at the cemetery. From seed to sapling, the tree nursery grows commodity products such as figs, pomegranates, and carobs that will be delivered to farmers across Morocco. The guardian retold this inside the shrine, where Raphael Hacohen’s body still rests, visited by people of all kinds seeking blessings of health and healing. Meanwhile, the trees grown just outside the shrine will prevent soil erosion, return Carbon Coin investment, and enrich communities across Morocco. Thus, the shrine at Akrich heals in many ways.

Then HAF took the UVa interns to the women’s cooperative, who held an exhibition of their rugs. Art exhibitions always have a sanctified air—introspection and outrospection. We admired the rugs, and the women watched us admiring the rugs, and we watched the women watching us. We wondered what they thought of us. Maybe they wondered the same. Recursive forever like a hall of mirrors, you look outwardly at an art exhibition, but become compelled to study yourself just as much as you do the world around you. No one spoke here. No one needed to speak.

After a while, I climbed up a hill behind the shrine and sat and watched the landscape. Kestrels circled overhead on a vent; songbirds called to each other from olive branches; the wind blew softly over the town and towards the Atlas. While I sat here, a shepherd drove his flock up the hill. He stood proud and straight, as if reaching toward the sun, and I was crouching low to the earth. I raised my hand; he raised his. In this brief moment, we each wondered what the other was thinking, what the other was doing, what we wanted to do; and in this moment, we recognized each other in a mutual greeting that could perhaps be considered respect. Not a word was shared. Not a word was needed. He continued down the other side of the hill, and I remained among the kestrels and songbirds and shrubs. For just a moment, there was a thread, a yoke, a bridge that connected him and me in mutual introspection. It was a moment much like the rug exhibition of the women’s cooperative. It was a moment like kneeling before the shrine of an ancient and revered saint.

Since arriving in Morocco, I’ve often wondered why I came here, and what good I can even do. Besides buying a couple rugs from the cooperative, the UVa interns did nothing during our visit to Akrich. This troubled me at first. But I think that we were meant to learn what a Moroccan community can look like: a Jewish site, a women’s cooperative, a Muslim family, and village people working together to help themselves and each other. This type of community of plurality, while not completely alien, is not as well practiced in the States as in Morocco. I think the UVa interns touched the essence of this: certain moments in Akrich zapped me, like grazing an electric node, to introspection and awareness of myself. What constitutes me? What constitutes this shepherd? Though the threads of our lives are different, they can be woven together into one fabric. A community isn’t a perfect thing. Just because people work together doesn’t mean they’ll do good. But in order to tackle the looming challenges of the 21st century, being bound like a fabric with your neighbors is better than being a loose thread.

Ryan Winegardner, UVa/HAF student intern There was a holiday atmosphere at Al Mansour Eddahbi Middle School when the HAF team arrived on the 26th of May, 2022. Children…