HOUSE OF LIFE is an innovative agricultural initiative whose implications are broad and resonate acutely with current world events; set in the specific context of Moroccan human development needs and cultural history, the model thus created could be replicated throughout North Africa, the Middle East and beyond.

The term HOUSE OF LIFE denotes a traditional name for a Jewish cemetery.  It was therefore particularly appropriate for the Governor of the Al Haouz Province, Younès Al Bathaoui, to employ the phrase in respect of the project, led by the High Atlas Foundation (HAF) in the Kingdom of Morocco and endorsed by the Clinton Global Initiative (CGI) in three provinces.

The uniqueness of the scheme lies in its intercultural aspect.  HOUSE OF LIFE facilitates the free loan of land adjoining Jewish burial sites, in order to establish organic tree and medicinal nurseries for the benefit of neighboring Muslim farming communities.

Aided by the creation of HA3 (the High Atlas Agriculture and Artisanal social enterprise), a complete process from farm to table is envisaged, thus addressing existing gaps in the organic agricultural entrepreneurial system.  Organic certification, fair trade prices and wider markets – national and international – are secured for local farmers, whose communities go on to benefit from reinvestment in further projects.

The initiative forms part of HAF’s One Billion Tree Campaign, itself one of several different human development schemes implemented by the foundation.  All HAF projects aim towards environmental consciousness, socio-economic self-sufficiency and sustainability.  They include organic agriculture, clean water and energy as well as programs addressing the particular vulnerability of women and youth and enhancing cultural diversity.

Evolution of an idea

The HOUSE OF LIFE pilot project was established at Akrich, Al Haouz province, a rural area outside Marrakesh, in 2012.  The locally managed nursery was established by HAF on land lent by the Jewish community of Marrakesh-Essaouira, adjacent to the tomb of Rabbi Raphael HaCohen, one of over 600 Jewish burial sites dotted across the country, in rural as well as urban areas.

In February 2015, at a ceremony presided over by the Governor of Al Haouz, Mr. Younès Al Bathaoui, 30,000 seeds and saplings were planted and a further 30,000 two-year-old trees – olive, fig, pomegranate and lemon – were set aside for distribution to local farmers.

At the same time, the proposed extension of this scheme across the entire Kingdom was announced, five further contracts having been put in place.  Thereafter, in June, discussions were finalized resulting in the endorsement by the CGI of the project in Azilal, Essaouira and Ouarzazate provinces in the context of a proposal to plant a million organic fruit seeds at Jewish sacred sites.

“This initiative will give more life to these regions and will reinforce the hopes and perspectives of their inhabitants,” noted Governor Al Bathaoui.

Rural Moroccans comprise 43 per cent of the country’s 32 million population, with 75 per cent of rural households earning less than the national average (IFAD, 2013).  Currently, farmers rely primarily on revenue from barley and corn; while these staples are planted on more than 70 per cent of agricultural land, they account for only 10 to 15 per cent of agricultural revenue, according to Morocco’s Agency for Agricultural Development.  Farmers therefore are making the transition to planting cash crops, typically fruit trees and plants, to generate greater income.

One billion trees and medicinal plantsare needed as part of the process of overcoming subsistence agriculture, which is at the root of rural poverty.  Their establishment would also help offset severe environmental challenges facing the Kingdom, particularly soil erosion, desertification and deforestation.

Modern Morocco is comprised of several cultures including its Jewish community, present in the region for two thousand years and possessing an important architectural legacy.  The Kingdom is committed to the celebration of this rich mosaic; cultural preservation initiatives (that could be viewed as something of a luxury in a developing country) are viewed as taking place ideally in the context of vital human development projects.

A Moroccan-US non-governmental organization, HAF, based in Marrakesh, Morocco, was founded in 2000 by former Peace Corps Volunteers, including HAF President Dr. Yossef Ben-Meir.

The foundation uses a democratic, participatory approach to enable marginalized, mostly rural, Moroccan communities to determine what they most need and to facilitate project success.

The broad goals are twofold: to cease subsistence agricultural practices that trap communities in a vicious cycle of rural poverty and to develop the local and national economy through a variety of green growth business initiatives, overseen initially by the foundation.

Rural cooperatives are created as a necessary mechanism for business activity; HAF – through HA3, its subsidiary corporate service – ensures a fair market price, enabling farmers to receive greater income.  A significant added value is achieved when the produce is marketed as organic, fair-trade and environmentally and socially responsible.

Profits are reinvested in further projects prioritized by the communities themselves, in education, health, water infrastructure and small business development particularly for women and young people.

All of this is conducted in the context of a zero waste strategy.  HAF anticipates using the walnut and almond shells and hulls to produce low emission fuel briquettes.  Ultimately, the aim is to export Moroccan fair-trade, organic produce to the US and EU markets.

Recently, HAF’s work has expanded beyond Morocco and its ethos and methodology hold the potential to benefit communities worldwide.

In Moroccan terms, HAF’s sustainable development vision, as shared with CGI, mirrors the Kingdom’s vision for itself, with the HOUSE OF LIFE project, linking Morocco’s Muslim farming families and Jewish communities, ably embodying a multiplicity of goals.

About the Author: Kati Roumani, based in Marrakesh, works in the field of intercultural understanding and Jewish history and assists the High Atlas Foundation in its communications. 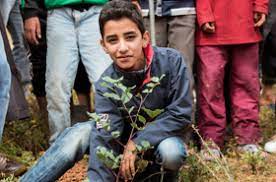 August 10, 2015 The High Atlas Foundation’s August Newsletter features updates on the HOUSE OF LIFE initiative, as well as Sami’s Project and the “Baby Booties” initiative in…

Celebrating Sixteen Years of Glory with the Moroccan-Jewish Community

By Hannah Rickard, Intern for Multicultural Initiatives August 6, 2015 HAF team members attend the annual Throne Day party as guests of the president of the Jewish Community…