“Khettara”: The Past & Present Treasure in the Haouz Region 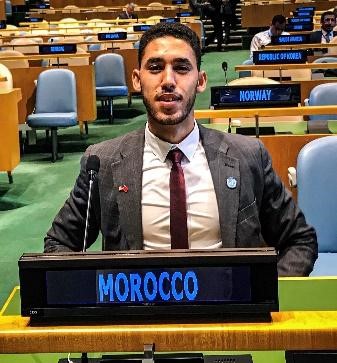 Errachid Montassir is from the Rhamna province of Morocco and is a High Atlas Foundation manager of the USAID Farmer-To-Farmer program. He was an organizer of the first United Nations Youth Climate Summit in New York during 2019.

This article is about a brilliant water supply system invented by indigenous people—Khettara—which helped build a civilization and transferred deserts into green paradises as it stood against climate change problems. The aim of this article is to show the value of this water heritage and plan water sustainable initiatives.

Water is the great essence of life in all its manifestations and ways of nourishing, whether for  plants, animals, or humans. Water is also the pillar of urban planning and stability. Many deserted places flourished and came to life due to water abundance whereas other lively and active places have faded away as water provision dwindled, taking the spirit of the place with it.

Water is the core around which human history revolves. It affected people’s collective works and represented not only a historical and ritual reference but also an important and inherent survival element. This fact was so evident, particularly in the Haouz region, during the Almoravids era. The creatively engineered means of providing locals with sufficient water depended only on what nature offered from water sources, valleys, or even underground basins. They invented smart ways to bring it all up to be used where needed. Creative tools and techniques were considered, one of which is watersheds (Khettarat)[1]. This technique was one of the most important and creative examples of traditional engineering that helped in water management. It also made it possible to know the mechanisms of how water is directed and distributed underground.

The flow and abundance of water was a huge natural factor that contributed to the founding of the city of Marrakesh and its development. Luckily for the city and the Haouz region in general, there has always been a wide, underground basin of surface water that could be smoothly and easily brought up thanks to the Khettara system. The watersheds surrounding Marrakech particularly—and the Haouz region in general—are of utmost importance in the historical, economic, and social development of the region. Through this course, remarkable landscapes that presently stand as living witnesses can be considered symbolic representations of the region’s history.

Watersheds are among the traditional techniques that try to adapt to changes and survive alongside modern technology. Such techniques allow watersheds to be classified based on a set of related features, and thus compare them in accordance with their topography and geographic positioning.

The founding of Marrakesh during the second half of the 11th century was a substantial achievement of great historical importance in the organization and management of water resources. Marrakech, as the cradle of culture and civilization in southern Morocco, played an important role in the country’s economic life. Since its birth, it was challenging to provide the city with water. It was necessary to water the orchards and pastures. All this required expediting the management of significant quantities of water to cover the city’s ever-increasing needs. Irrigated farming constituted the only activity in the Haouz. This type of irrigation can only be performed with abundant water and the use of appropriate and suitable water management techniques to fetch water so that it can then be distributed to farmlands.

The natural pattern and the harsh weather conditions in the Haouz region also linked the development of agriculture with the dependence on water acquisition techniques. In this context, for centuries, the residents of the Haouz used their skills to supply water. Thus, they managed to water thousands of hectares using the largest possible number of water resources. The latter always constituted a basic raw material. It was necessary to get water from a spring at the foot of the Atlas Mountains and fetch it by kilometers of dirt road. However, the water transported this way is always prone to evaporation due to the heat, and large amounts of it are lost before they reach the agricultural fields. This issue leads to the use of certain techniques known at the time as Saniya[2] or Na’ura[3] to satisfy the population’s needs for water by using open nebulae.

During the end of the 11th century CE, an ingenious method of watering and water supply was used. It is related to the watersheds khettara system, which apparently contributed significantly to the existence and development of oases in this area. The social circumstances and behaviors also changed their features along with the changing water management system.

Khettara is an Arabic word verb meaning an action of fluctuation and movement. Thus, linguistically, it means an extension of the water in motion, just like the related words sania (water-transporting camel), na’ura (waterwheel), or shadouf (water irrigation machine)[4]. As for its actual meaning, a long and regular tunnel or basement connects consistent water wells and sources. Its purpose is to drain the trapped water inside the open nebula and the waterbed and bring it to the surface of the earth or to points of use where the tunnel itself forms a waterway with a regular slope.

The watershed system mobilizes groundwater through a passage or crypt, which enables the passage of groundwater towards the surface of the earth. The watershed is based on exploiting the underground waterbeds by transporting the water through an “underground tunnel.” This transportation goes from the upper layer towards the bottom one by making use of the topographic slope in the area. The underground tunnel plays the role of providing ventilation and maintaining the Khattara from the accumulation of sand and mud due to sand storms. Watersheds consist of three main sections: 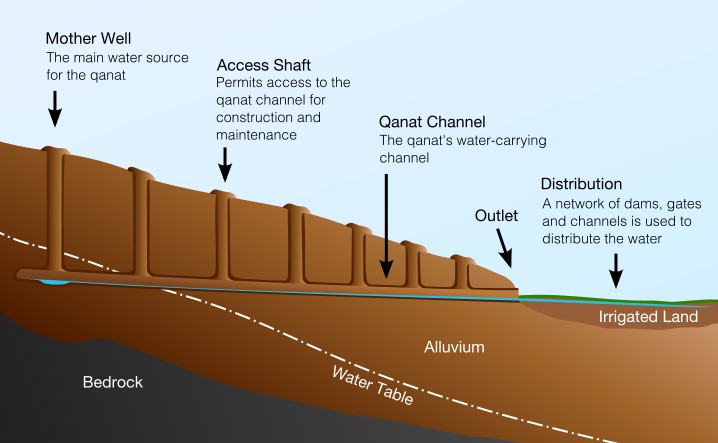 Ancient Waterways in Morocco
Illustration of the “Khettara”

Khettara remains one of the most prominent traditional systems. After its arrival to Morocco during the Almoravids period since the sixteenth century CE, watersheds spread largely in the region of Tafilalet[5]. Khettara plays a major role in ensuring the stability of the oases residents and their continuous practice of agricultural activity, as well as compensating for the shortage of water.

The support structure of the above stereoscope is made of galvanized steel tubes, with an added necessary touch ensuring the stability of the scenography. The structure is covered with a protective coating out of sight. To represent the elements, roots and various components of the scenography, expanded polystyrene packaging and fiberglass sheets are sealed with ceramics to create the basic topography.

Watersheds play a very important economic and social role. If it were not for them, a city called “Marrakech” would not have existed in its current size, with its urban and religious facilities, as well as its gardens, orchards, and large parks. Without it, these agricultural spaces would not have flourished in its suburbs.

The economic and social significance of watersheds and their flow (effluents) differ from one owner to another. This is explained through the important supplies it requires to exploit and durably maintain them. The most common ones are found within the ownership of the state. Yet, the economic and social role in question has witnessed a significant retreat regarding the current status of the majority of watersheds. Most of them became dry, and their condition deteriorated due to their inability to keep up with modern irrigation techniques and systems.

The ownership of watersheds is considered one of the main justifications for their development and their continuation, or their deterioration and demise. Due to the high cost required for its completion, owners may just abandon such watersheds as unaffordable. This promotes their gradual disappearance.    Uses and types of these watersheds are as follows:

A large percentage of watershed remains under private property: family or joint ownership between groups of individuals in the village, forming what is known as a “Commune.” This is due to the fact that the process of exploiting Khattaras is in itself difficult and laborious, requiring time and many resources. This necessitates a cooperative and collective human effort that is shared by individuals and carried out along the watershed location. The majority of collective Khattaras have a weak output that does not exceed 15 L/S, even though they represent thirty-four percent of the Haouz region, while the Ahbas’ share reaches twelve percent of the total in Al Haouz watersheds, such as the Khattaras of Sources of Brahim. In contrast, the state owns no more than four percent of the total watersheds in the Haouz region, a ratio that corresponds to the proportion of the longest and highest output, such as Great Menara. 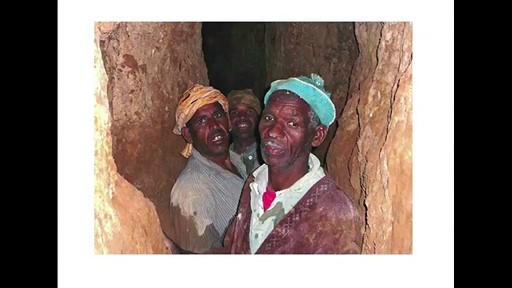 Picture of traditional topographers (Khtatriya) digging a watershed. Source: Ext. from a video prepared by the Geography Researcher Thierry RUF about the museum

In an interview, Dr. Musstapha Aichane, a professor of geography at Cadi Ayyad University in Marrakech and a USAID Farmer-to-Farmer Volunteer, remarked on the subject:”I was born in Marrakech, in the kasbah to be exact (an ancient neighborhood in Marrakech city), where the Khettara was the only source of drinkable and agricultural water. I still remember how deep and long it was, just as deep as how it economically and socially helped my parents and grandparents back then. The Khettara is not only a technique intended for mobilization of water resources, but it also contributed to the sustainability of the oasis culture and economy. My only message to the youth is: Please dig more for the treasures made and developed by the ingenious people. This is a key to preserve and give it more value, as an appreciation to our grandparents.” 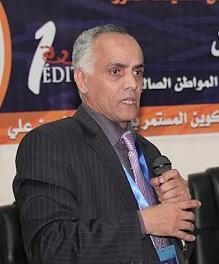 In light of the above, it becomes clear that the Khettara technique is an important historical heritage, and an ecological treasure that is now present in the exhibits of the Mohammed VI Museum for the Civilization of Water. The latter receives high appreciation and great attention from different audiences (researchers, students, tourists …), for it is the technique that helped in the making, preservation, and synergy of the oases. It also played a major role in managing internal water resources. This article is a call for the youth generation to revive this Moroccan heritage in several ways:

The change is between our hands.

[1] A qanat or kariz is a gently sloping underground channel to transport water from an aquifer or water well to the surface for irrigation and drinking, acting as an underground aqueduct.

[2] It was used in the past to extract water from deep wells.

[3] A water wheel is a machine for converting the energy of flowing or falling water into useful forms of power, often in a watermill. A water wheel consists of a wheel, with a number of blades or buckets arranged on the outside rim forming the driving car.

[4] It is a machine to get water for irrigation. It was invented in ancient Egypt (in the era of the Pharaohs), where the ancient Egyptians used it in irrigation to transport water from low to high areas.

[6] It is the granting of the benefit of something while it is in existence that must remain in the possession of the one who gives it, even if it is estimated.

By Jasiah Hasan In the past fifty years, Morocco’s population has nearly tripled. Mass migrations and urbanization have pushed more than half of the growing population into cities,…

The Importance of Water in Developing Countries

By Alyssa Underwood HAF-UVA Intern The global water crisis is caused by a scarcity of clean water available to people all around the world. Only 3% of the…