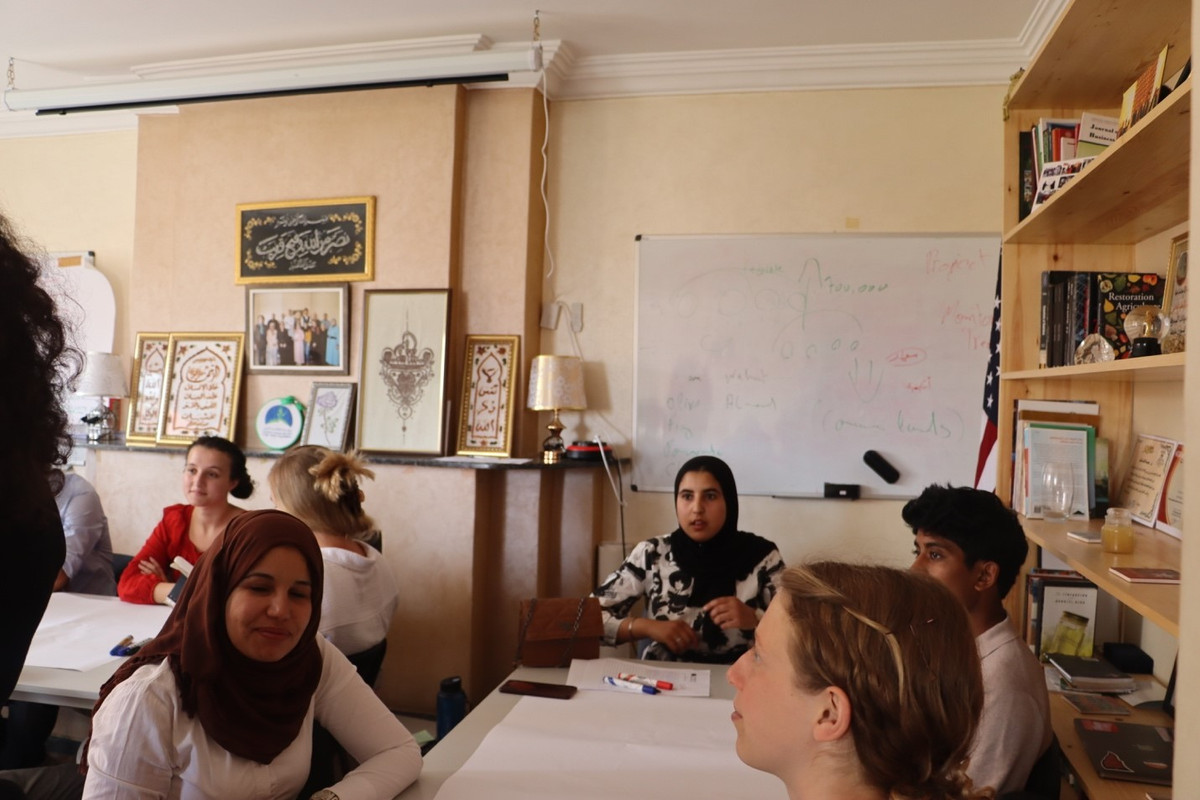 On Monday morning, June 6, the High Atlas Foundation’s office was crowded with young people. Law students from the University Cadi Ayyad who work with the HAF’s legal aid clinic arrived to participate in an identity mapping workshop with the UVA interns. HAF’s Ikbale Bouziane facilitated our dialogue and ensured that both the Moroccan and American perspectives on identity were represented in our discussion.

Our workshop began with several markers of identity to reflect on: language, age, hometown, role model, socioeconomic class, family, and so on. Ikbale also offered us the opportunity to write our own prompts on the mind maps. My group added a section for our hobbies, our perception of love (though adding it felt too intimate to me), and a section for doodling. Other groups remained truer to the intention of the workshop and added sections for music genres, favorite clothes, and food. Of the prompts Ikbale assigned us, “role model” was the most interesting. I and the other American in my group wrote our mother and father as our role models; all four Moroccans wrote in turn “mysilf, my selfe, mysilfe, my self.” It certainly appeared so, since none of them referred to the others’ spelling of “myself” when writing it.

I was struck that in this society that values family and hospitality so strongly—values that I associate with collectivism and interdependence—all four of our group members rely so solidly upon themselves. I said “they look up to mirrors” when we presented our identity map to the class and the law students all laughed, nodded, and agreed that they are their own role models. We had the opportunity to recognize a cultural phenomenon: Moroccans are self-reliant and see themselves that way.

To me, the value of the workshop comes primarily from the conversations that came after it. The workshop itself was like a trawler: Ikbale, the fisherwoman, sifted through the silt of our self-concepts in search of fish, moments when we could recognize how our identities relate to the world around us. I had such a one with the role model question. Trawlers muddy the water behind them; in the same way, Ikbale muddied the way we interacted with one another after the activity was over. In the wake of the workshop, we were less concerned with how we presented ourselves and instead focused on learning more about others.

At lunch, a group of law students sat with me. One, Karim, asked me about Russia. Are Russians persecuted in the United States? What are your opinions about the war in Ukraine? He expressed his opinions about Russian politics, the Cold War, and NATO in return. We were able to compare our political positionalities, the way we understood war and fatality, and the way we think about the economy. Without the workshop that morning, we would have interacted in clean water, and kept our thoughts in the silt to ourselves. But we were willing to be muddy and talk about topics that would otherwise have been taboo.

The value of the workshop with the Cadi Ayyad students is multidimensional. It fostered intercultural dialogue between two groups of young people, invited us to reflect on ourselves, and encouraged us to recognize what unites us with and differentiates us from others. We considered how we interact with the world: the language we use to learn and build friendships, the cities we grew up in, the socioeconomic class that supported or obstructed our aspirations.

The workshop primed us to connect more deeply with one another. I remember that one of my group members is a criminology major. Another loves his date farm, and showed us photos of his palms, squatting in rows. I am still in touch with Karim. We discuss our pets, migration policies in different countries, and our hardships in a day. We met each other when the water was muddy, so we were able to forge a solid friendship quickly. That is to say, the workshop generated the conditions for us to form intercultural relationships, founded on an empathy for our ideological and experiential diversity. We all came to the HAF office that morning, even if our routes were categorically different.

By Susana Fernandez On day two of our visit to Tiznit, the first stop was a school in a rural community that desired funding to improve its water…

By Zoe Costello Figure 1: Jemaa El Fnaa at Night, Photo by Keely Fitzimmons, UVA student and HAF intern One of the most iconic sites of Marrakech is…