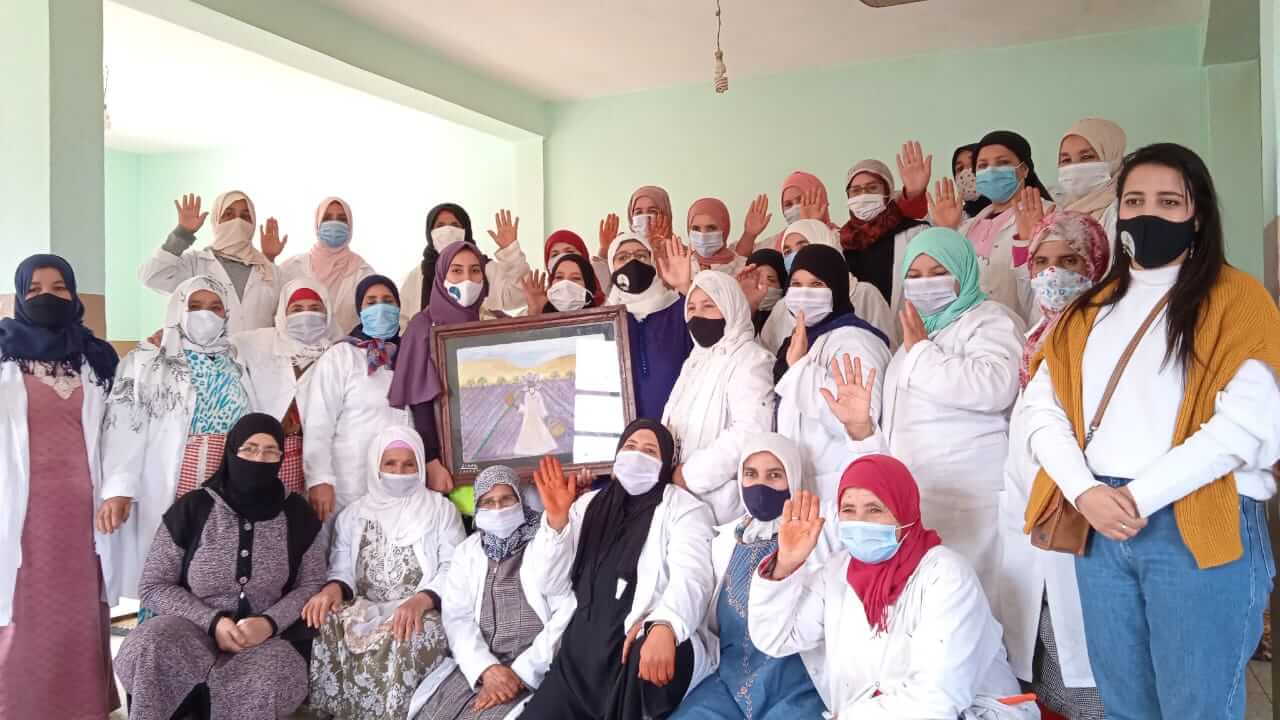 In the darkness of every night, she raises her head to the sky, looks with her eyes at the stars, holds the shield of a soldier in her hands, and does not know what to do with it. Does she protect herself? Or use it to block shots that could be fatal. The days flow and she talks with herself night after night, with the seed of resurgence implanted in her breath, and she does not realize that this seed is growing and growing even on marginalized banks .

The Ourika commune that belongs to the Al Haouz province in Marrakesh, witnessed the singularity of active and energetic women, the women of the Aboghlo cooperative.  Every woman can dream, but the dream of these women quickly started becoming a reality with courage and strength, and without being extinguished. Supported by the High Atlas Foundation since 2015, these women have been able to find enlightened areas in their lives.

During a USAID Farmer-to-Farmer team visit to the project, Aziza Rifak, the treasurer of the cooperative, celebrated their accomplishments, saying, “When Amina El Hajjami from the High Atlas Foundation visited us, we were divided, barely gathered together. I still remember our first meeting as it was held in a place not far from the headquarters of the cooperative, attended by only about eight women.”

“It was indeed a strange situation for all of us. The women shared the same confused faces,” she added. “The question of whether to go forward with the initiative or back off hung in the air.”

Since that first meeting, the number of women in the cooperative has increased to 60. The High Atlas Foundation has supported the women by delivering training and guidance so they can establish the Aboghlo cooperative for women of Ourika in 2016. Rachida Aoutchki, was appointed president, and the women started working on organic products such as couscous, Moroccan sweets, and other items.

The women of the Aboghlo cooperative worked hard and took advice that was given to them, while waiting to see results. As a result, and thanks to the efforts of the High Atlas Foundation, the cooperative was able to establish a partnership with the L’Oréal cosmetics company within their first year of operation. This partnership will allow the work to be done in a more orderly and effective fashion. It’s also allowed the cooperative to add the cultivation of the calendula flower, unique with its bright orange blossom and health benefits, to the cooperative’s activities.

On the same basis, Samira Al-Wardi, the cooperative’s secretary, told us about this wonderful experience saying that “after the establishment of the nursery, the work has become branched into two tasks: working within the cooperative and working in the nursery. This has required more effort and accuracy. In parallel with that, we acquire many new skills every day, whether on a personal or professional level and then.”

However, Samira did note her disappointment that despite the proximity of the nursery’s location, in a nearby area called Tigmey Ait Salem, the number of women kept decreasing and withdrawals continued for known or unknown reasons. “Now we are 32 women,” she lamented.

We asked Samira to tell us more about those skills that she mentioned, and with a giant smile she said, “For me, I learned everything, even the skill of speaking fluently. For us, the cooperative is a learning station before it is a workstation, through which we acquired the skills of communication, problem-solving, time management, and the most important thing for me is the leadership skill that has evidently exerted its influence on my family.”

Our women’s session continued and each woman shared a brief part of her story. Then Fatima, the teacher of Aboghlo women’s cooperative, talked about the steps of educating these women, highlighting the importance of the remarkable change that this step added to their lives.

Fatima tells us, “I was chosen from among three teachers back in 2018. I found the women at that time were already accustomed to the pace of work, and I only needed to add the principle of learning to their work. So they invested more and more in their energies and capabilities. Despite the difference in age among the women, they welcomed this initiative. Together we adopted a program that corresponds to their work schedule, so that the duration of classes was approximately two hours, at a rate of three times a week.”

On the other hand, Fatima also integrated with the women by sharing their activities, not only by providing lessons. She went beyond to live with them and experience the events of their day inside the cooperative.

Rachida Outchki, the president of the cooperative, left her words for the end to express with all sincerity the extent of her pride in working throughout these years with a group of distinguished women, carrying together the burden of all difficulties. She declared with the victory and joy,  “My soul is among the souls of all these women, and I cannot go forward without them. Yes we go through situations that disrupt us, but we twist the rope of advancement, and we hold onto it firmly and stand up.”

Rachida is now a successful leadership figure who does not lose sight of the smallest details of this cooperative that brings together all these women. The women all testified to her role. According to them, she is a very flexible person in her work, especially as she supervises training courses for women. She fluctuates, with boldness, between the role of the president and the role of the trainer, without losing sight of Rachida, the mother, who has other responsibilities toward her family.

After that, we went up to the women’s workplace to find them busy preparing products. Only the sound of the tools being used is heard in the hall, which suggests seriousness at work. Then Rachida and Sanae Benaadim, HAF’s Office Manager and Volunteer Coordinator, had a lively dialogue with the women, focusing on their inspiration, aspirations, and vision for the future. Sanae had the opportunity to express her recognition toward the women of the cooperative.

Returning to the achievements of women within the cooperative, 2019 was marked by the cultivation of saffron, that red gold, in addition to the calendula plant, which makes these women’s careers path shine, enabling her to always see the path of success ahead of her.

Inspired by every touching feeling we felt with these women, we went to an agricultural land in order to participate in planting 400 fruit trees. On our way, Aziza Rifak indicated, with a nostalgic smile, to the location of their first meeting where the pledge and the agreement to work together was made. Now, with each time passing by the place, a beautiful memory is generated, which only increases the pride of these women.”

With our arrival to the field, after Sanae and the women spoke about the effectiveness of HAF’s supervision of the Aboghlo cooperative, and in light of the valuable assistance that HAF Project Assistant Hassan Ait Ouatouch provided, each of these women was ready to plant trees. With the same seriousness and determination that characterizes the nature of work within the cooperative, the planting process was carried out in an atmosphere dominated by the hope of picking the fruits of these trees someday.

The women shared an atmosphere filled with inspiration while they talked about the experience of working in their nursery and the fun that eases the pressure of the daily practices in the cooperative, even though the current location has become a bit far. Rachida says with a happy face, “The hardest difficulties ease in front of a woman’s steadfastness.”

Yes, it is the steadfastness of a woman who had talked to herself during long nights in a desire for change. Here she is now, picking the calendula flower and saffron with longing, and picking with her a woman with a strong cohesive spirit, a woman who is originally the seed flower that was immersed in her breath one day, which is “the golden flower, the flower of Aboghlo.”

Sanae Benaadim HAF Office Manager and Volunteer Coordinator. Water is one of the most important resource management aspects that integrates the notion of sustainability in Morocco.The High Atlas…

By Zineb Laadam Farmer-to-Farmer, Morocco Despite weakening bodies, with grey hair and clenched faces, these people are still closely committed to their work with all dedication and sincerity.…