Yesterday, I traded the sprawling city of Marrakech for the rolling foothills and winding roads of the Moroccan countryside. Watching this buzzing metropolis retreat through the back window of the car we rode in, I was filled with excitement.
After an hour of driving and stop for lunch, we arrived at our destination, the village of Touama. There, we were to meet local high school students to engage in a discussion about climate change and its pernicious effects on rural communities such as their own. However, before the presentation began, we first had an opportunity to meet the educational leaders who had made our trip and the partnership with HAF possible. 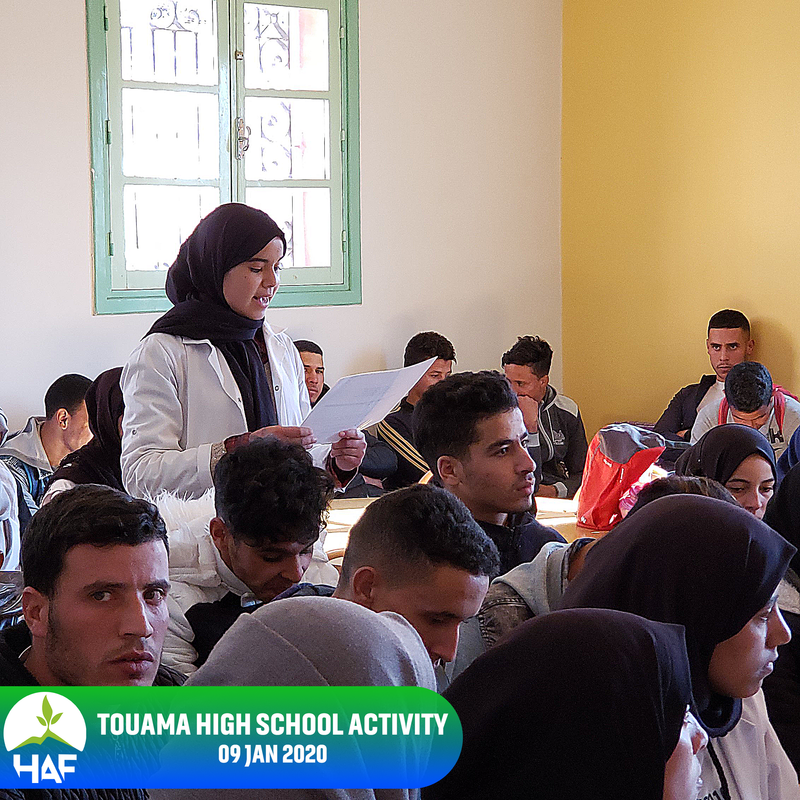 After greeting the head of school and other officials, we were shown several brightly colored school buildings and offices, before being led into the yard at the back of the campus. As we turned the corner and entered this multi-purpose athletic space, we gazed upon a breath-taking view of rolling green fields accentuated by the regal silhouettes of the mountainous peaks, the source of the Foundation’s namesake. Looking around the yard, we admired the colorful murals adorning the low wall around our perimeter. These images warmly wrapped us in a welcoming display of communal strength.
Shortly thereafter, we were shown back inside and led to a classroom where the workshop would occur. The students, aged between sixteen and nineteen years, slowly filed into the room in groups of twos and threes and sat in rows of chairs facing us. Once everyone was seated and present, the English teacher at the school instructed the students to rise and each state their names. Every individual was recognized from the front to the back of the room. 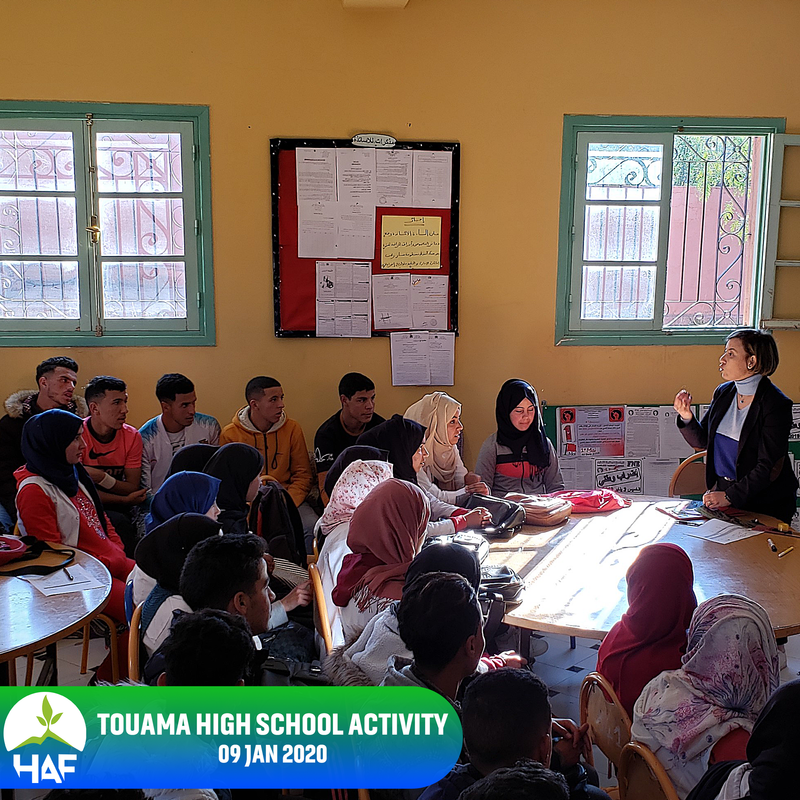 Afterward, they again sat and watched with rapt attention as HAF staff members Karam and Imane began their presentation on climate change. The students were engrossed with the narrative they wove, from the demonstration of harmful environmental practices to the resolution and explanation of tree planting as an active agent for positive change.
From there, we shifted into a period of back and forth sharing during which students, standing before their peers, spoke earnestly about the environmental challenges afflicting their community. A lack of awareness and education was a recurrent theme they pointed to as causation for these issues. It was clear to see, though, that these students were not willing to have this same fate beset them as well. They were eager to share where they saw their community falling short in its efforts to protect the environment, and how they would, if given the opportunity and power to do, bring about more sustainable and productive approaches. 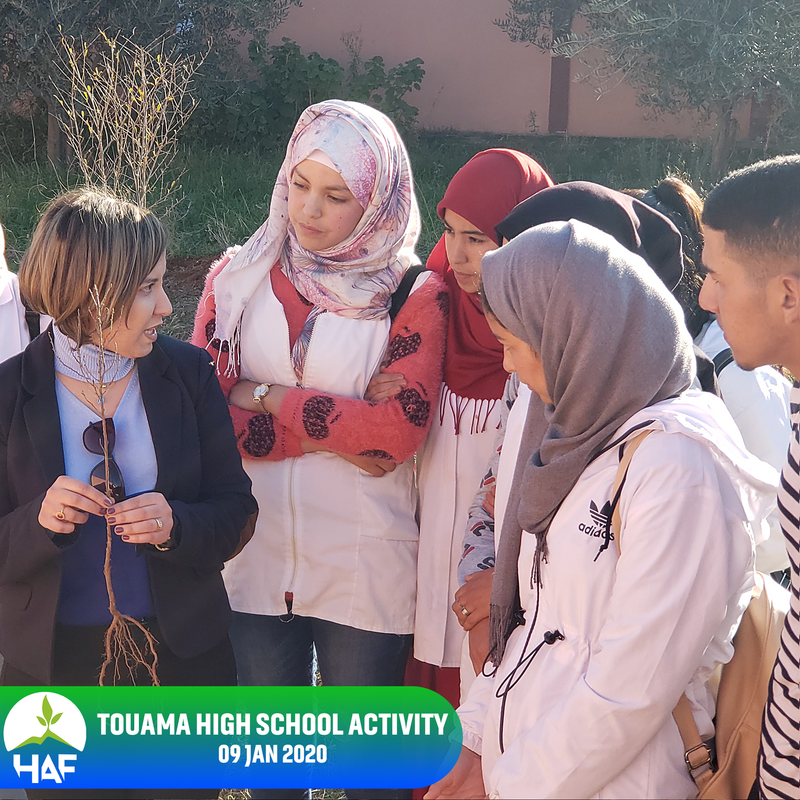 For the second stage of our visit, we returned again to the outdoor schoolyard. We were escorted to an area off to one side that had been designated as the planting site for the fruit trees we had brought with us.
The excitement in the air was tangible as the roots of the first fledgling trees were placed into shallow holes dug in the ground, and gently encased in beds of fertile soil. Pride welled in the faces of the students, their imaginations conjuring images of the vibrancy that would grow from these bare stems. For them, it seemed, the trees represented vessels that would grow and evolve as they would to eventually give back to the people and places that had nurtured them. 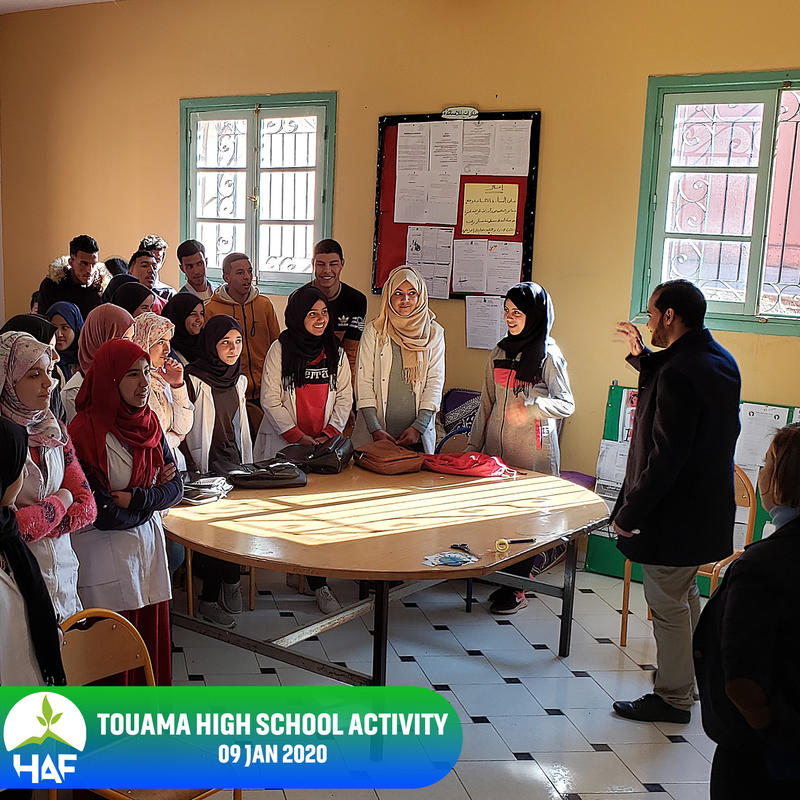 Once we had put the dozen-odd saplings in the ground and had enjoyed a short snack accompanied by green tea, we reached the final act of the afternoon. Together with the other HAF volunteers and staff, we presented the head of school with a certificate authenticating the now planted fruit trees and celebrating the future partnership of Touama and the High Atlas Foundation. 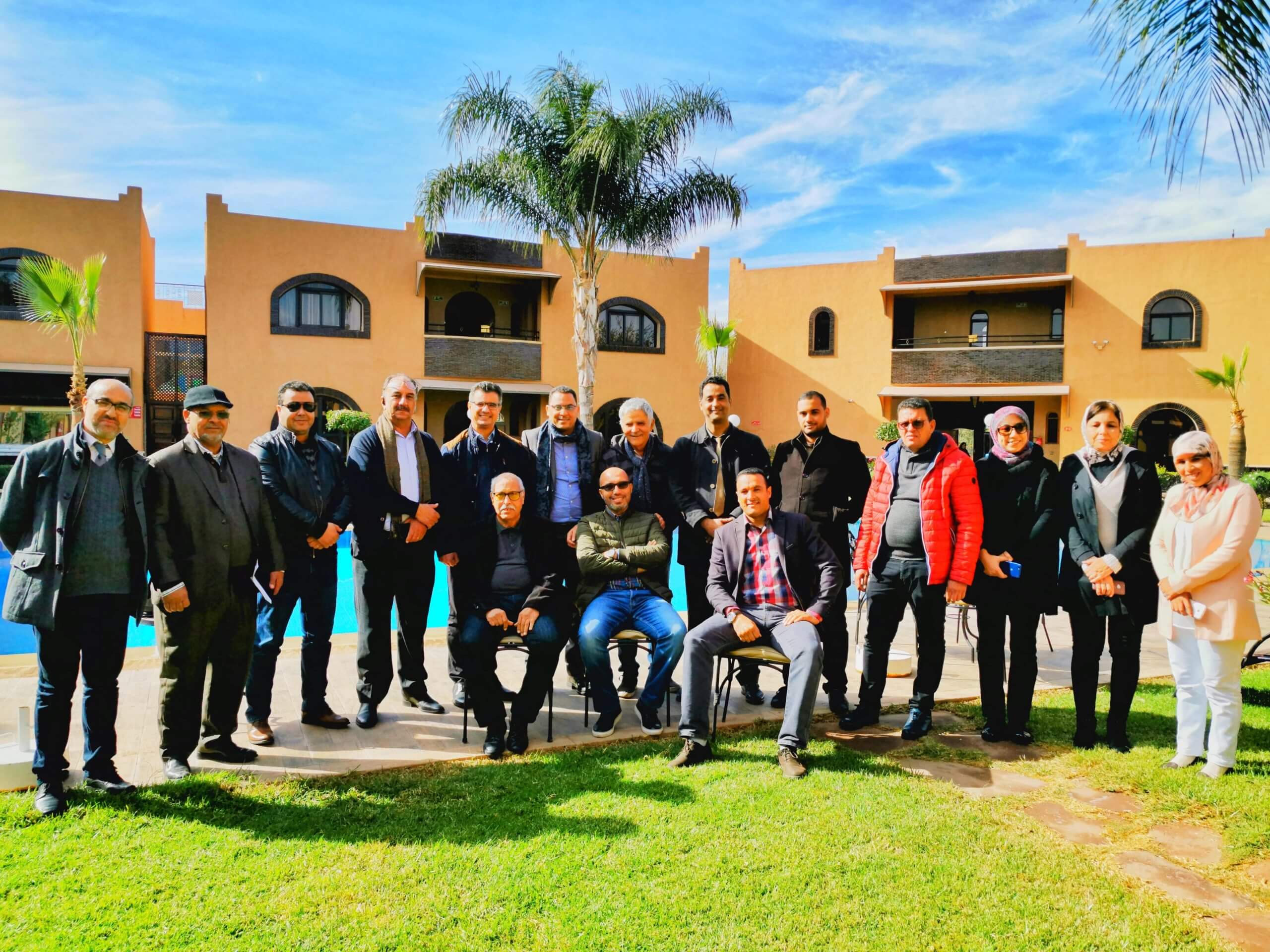 So Much Depends upon a Tree

Prof. Ellen Hernandez HAF Volunteer On a sunny, winter morning, our team leaves the HAF office for Al Haouz province. Today, we will visit two nurseries with an…