Fundraising in the Time of Covid-19, and After: Changes, Challenges, and Opportunities

Written by Tahi Wiggins and derived from a presentation by Hudson Ferris, hosted by NCheng LLP

With the massive economic trauma brought on by the covid-19 pandemic, one may expect that charitable giving would have taken a similar downturn. However, such was not the case. Although the beginning of the pandemic saw an 8% dip in giving compared to the previous year, by mid-2020, charitable donations had skyrocketed, increasing by over 300%.Emotions are one way to explain this outpouring of generosity. With confinement, community trauma, and lack of connection, it is easy to develop an untapped feeling of obligation to help in some way. Since frontline efforts such as mass production of PPE or development of vaccines are unavailable for participation by the common person, monetary donations become an obvious way for people who want to help to do so.

There also exists a functional reason for the sharp uptick in giving. For those individuals for whom the pandemic did not mean a loss of employment, financial savings quickly developed (the personal savings rate jumped to 32% in April 2020), further increasing the likelihood of giving. Additionally, there was no large, consolidated organization leading covid-19 relief efforts, so donors defaulted to supporting organizations they had in the past. New organizations came into the fold by appealing to the newfound need that covid-19 caused. However, some organizations reduced their capacity and fundraising demands in the face of the pandemic, reducing the competition for those who stayed in the field.

Organizations that were most successful in soliciting donations had the traditional key elements of a good fundraising message (emotional resonance, portability, and connection of money to the posited problem), but also—put simply—speed. Because of the drastically rapid nature of societal transition as the pandemic took hold, in many instances, donations were not based on the most compelling argument but simply which organization got to the donor first. Generally, most donors maintained their prior giving levels as well as giving special one-time gifts. Foundations accelerated their grant decision timelines in order to respond to increased need and in many cases, allowed program funding to cover general operation.

The traditional pattern of charitable giving can follow a pyramid shape, with “self” on the bottom followed by “community”, “passion”, and “society.” This traditional shape was upended in two ways. Firstly, donors felt compelled to donate locally—to support their neighbors. Monies to community-based organizations such as food banks and shelters rose precipitously. The second shift arose in light of the newfound awareness of deep racial injustice in the U.S. and around the world sparked by months of protest. The “society” part of the pyramid swelled as donors contributed to organizations dedicated to advancing the cause of racial justice. That being said, this spike in donations was relatively limited to a few-month period, and it is unclear whether it will be consistent in the coming months.

The post-covid fundraising environment—that is, the future—will depend on several macroeconomic indicators, including health of the financial service and real estate sectors and potential of inflation. Additionally, perceptions of need will likely shift from the immediate concerns such as PPE, rent relief, and food aid to sectors whose need has accumulated in a less immediate manner: arts and culture, education, workforce development, etc. 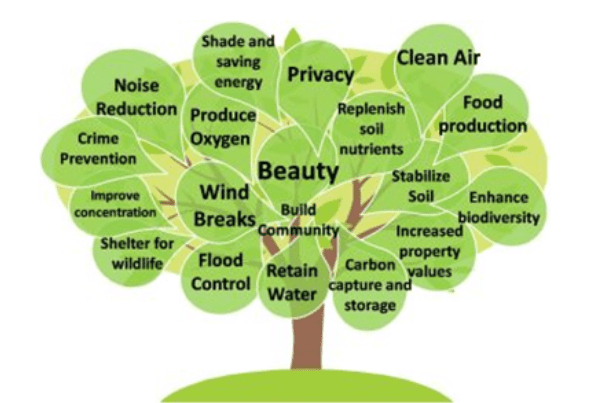 The Power of Trees for a Sustainable Future

Bezawit Mesfin Bogale HAF-UVA Intern  Trees play a vital role in preserving the environment for generations. The environment is key for survival in terms of not only health…