Based on the teachings of all Abrahamic religions, humans are entrusted with the safeguarding of mother nature’s multiple components. Trees, in particular, are treated with reverence and are viewed as a sacred element in many cultures. Beside their ecological functions, they provide people with spiritual, symbolic, cultural, religious, and aesthetic benefits. In Islam, for instance, there are over 50 plant species mentioned in the Holy Qu’ran and Sunnah. From an Islamic perspective, planting a tree is considered an act of continuous charity. The Bible abounds with references to trees more than to any other living creatures, except humans. Similarly, trees occupy a special place in Jewish thought that an entire day called Tu BiShvat–the new year of trees–is dedicated to raising ecological awareness through tree planting.

Overall, all faiths have attributed great importance to tree planting. Building on these teachings and with the aim to emphasize the mutual relationship between humans and nature, the High Atlas Foundation (HAF) set aside the third Monday of January to celebrate its annual tree planting day. This year, the celebration coincides with two other special occasions: Martin Luther King day and Tu BiShvat. There couldn’t have been a better day to bring together individuals from different religious backgrounds to engage with local communities through tree planting. It is a day to be reminded of the moral imperative of environmental stewardship. In this respect, HAF staff members mobilized throughout the country to engage in this day of service and planted a wide variety of tree saplings in school yards, religious sites, cultural centers, cooperatives, and universities.

The tree planting event in Tangier kicked off at the Tangier American Legation Institute for Moroccan Studies (TALIM) where we were kindly welcomed by its Resident Director, Jen Rasamimanana, and Associate Director, Yhtimad Bouziane. Staci Dawson, Deputy Director of Dar America, also joined the event. The legation is considered the only US national Historic Landmark located in a foreign country. Though symbolic, planting a tree in a historic mansion that attests to two hundred years of friendship between the Kingdom of Morocco and the United States of America was truly monumental. In addition, we chose to plant a pomegranate tree, which is a symbol of fertility and longevity in many cultures in the hope that this tree will grow just as this cultural and educational center continues to thrive. 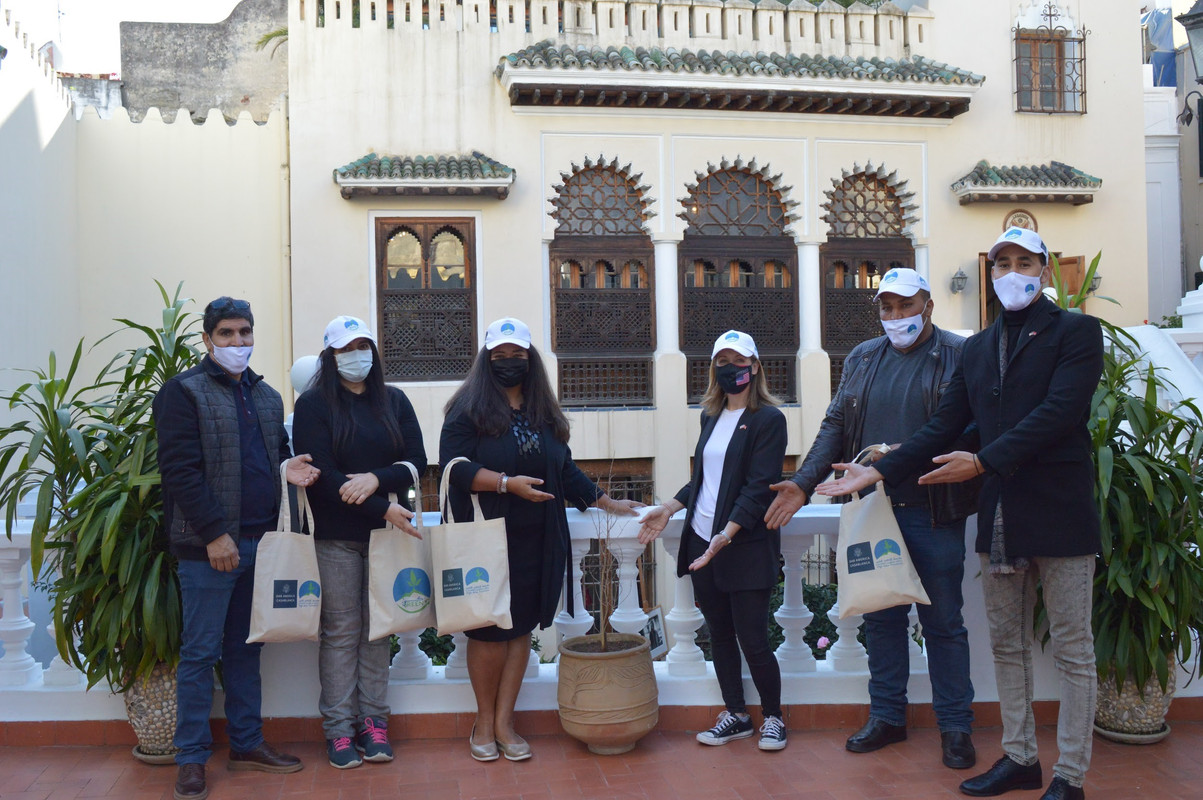 Later, we headed to our next planting site at the Résidence Laredo-Sabbah-Benchimol, the Jewish Hospice in Tangier. The nursing home, which is managed by Mrs. Rica Emergui, provides care for five elderly members of the dwindling Jewish community in Tangier. Upon our arrival, Mrs. Sonia Azagury, who is in charge of the preservation of the Moroccan Jewish heritage in Tangier, received us warmly and guided us through the building. As we approached the garden, a beautiful green mosque minaret stood pleasantly in the background of this care home. The sight of it gave us great pleasure as this was a true embodiment of Morocco’s long lasting history of interreligious coexistence. 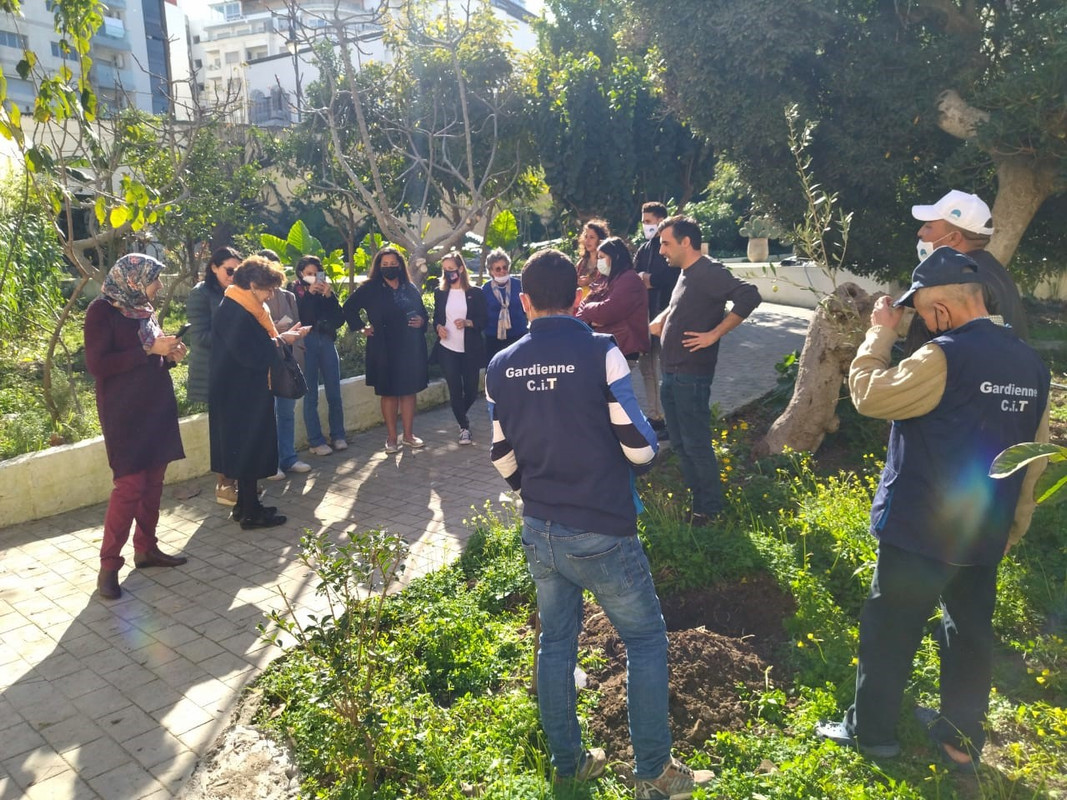 Mrs. Sonia Azagury, who is in charge of the preservation of the Moroccan Jewish heritage in Tangier, accompanied by members of the Jewish community reciting prayer before planting the trees. January 2022. Photo: HAF Staff

With the help of Si Hmad, the hospice’s gardener, and Hicham Amaroch, a former USAID Farmer-to-Farmer Volunteer, several types of trees including carob, olive, almond and pomegranate were planted at the hospice’s garden. Mrs. Sonia inaugurated the tree planting event with a recitation of Berakhah (Jewish blessing) before placing an almond sapling in the ground. Other members of the Moroccan Jewish community also took part in planting the trees. Afterwards, we made our way toward the hospice’s main building that comprises a living room, residential rooms, a kosher kitchen, and a dining room. After having greeted the residents, we walked into the dining room where a bounty of fresh and dried fruits graced the Tu BiShvat dinner table. According to Mrs. Rica, it is customary to serve different types of seasonal fruits on this special occasion. 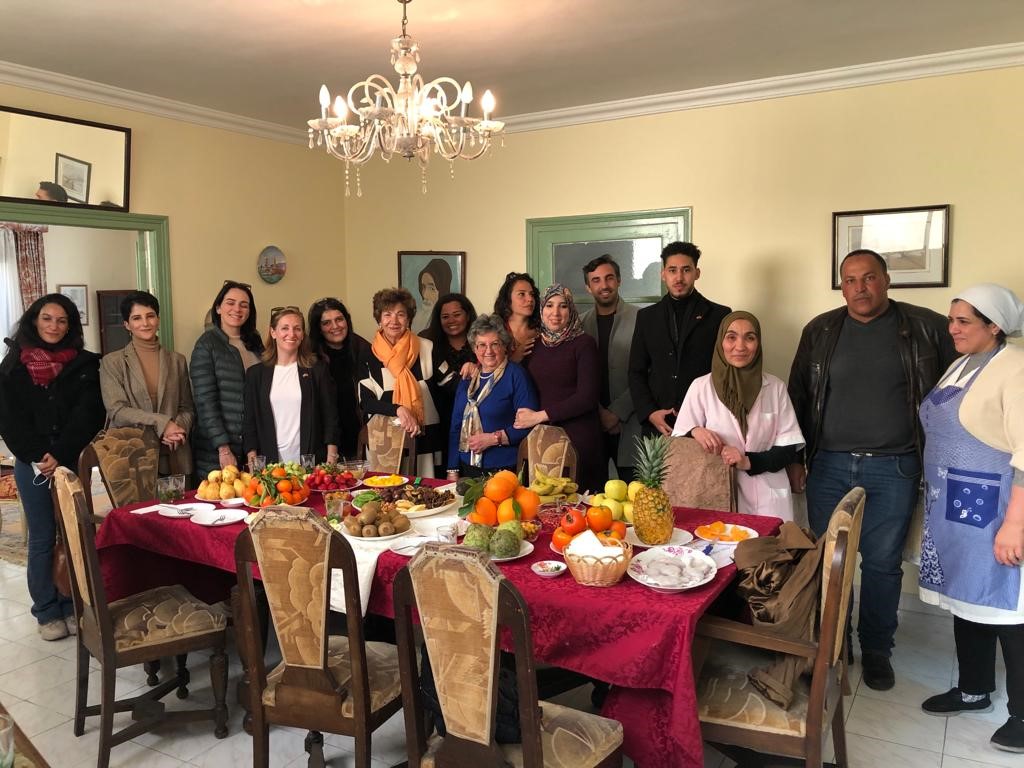 The significance of planting trees at such historical sites is immense with people of different faiths gathering to plant saplings and grow together as a community. As the trees take root, they will thrive to become a beacon of harmony and bear witness to such moments of unity and selflessness. Convinced that it is only through capturing such momentous stories that future generations will get to hark back to these memories and be inspired to walk down the same path as their ancestors, the USAID Dakira Program is heavily committed to documenting and archiving Morocco’s multiethnic and interreligious heritage.

Soukaina Kherdioui is a field coordinator for the USAID Dakira program and is currently based in Rabat. Dakira, implemented by the High Atlas Foundation and its partners, aims to strengthen inter-religious and inter-ethnic solidarity through community efforts that preserve cultural heritage in Morocco. By Jamal Maghiouzi, HAF Field Coordinator On January 12, the Amazigh people celebrated their New Year 2972 which corresponds to the Gregorian calendar of 2022, Hebrew calendar of…