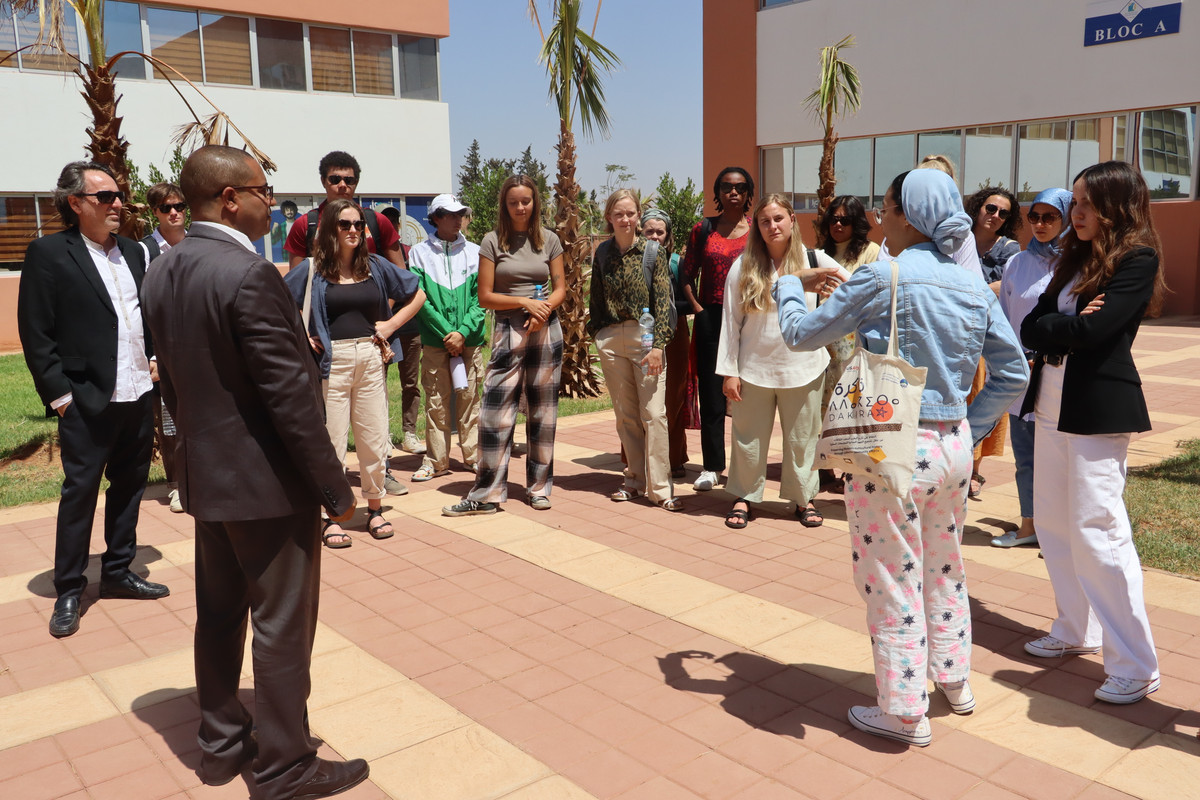 How can you sum up a topic as broad as gender or race in 15 minutes? Is it possible to have such discussions with a large language barrier and between two cultures that have widely different understandings of the concepts? These are questions I pondered after completing a workshop with students at the University Sultan Moulay Slimane.

The day began with a tour of the Faculty of Economics and Management campus. The campus was recently built and had sleek modern amenities and buildings that rivaled my own universities’ campus. This was the first university in Morocco I had the privilege of touring, and I was excited for the opportunity to understand more about higher education in Morocco. Most students were taking final exams; as a result, the campus was more empty than usual. Still, I enjoyed touring different lecture halls and walking throughout the main quad.

After lunch, we went to one of the large lecture halls to meet some of the economics students and start the workshop. We began with an icebreaker, where each person drew symbols that described them and had other individuals try to guess what those symbols meant. The icebreaker was a good way to start conversations between the American and Moroccan students that did not require extensive knowledge of a shared language. Both sides were eager to get to know one another; I talked to three economics students sitting behind me in a conversation that flowed between English, French, Darija and Spanish. Though we did not share one language fluently, we used our minimal understanding of the others’ language to get to know one another.

The opportunity to bond in a multilingual setting with other university students was a highlight of the trip. However, our lack of shared language became a bigger struggle when the workshop began. We were divided into five groups, and each group was assigned a broad social topic, such as race, gender, and religion. We were then supposed to discuss what our perception of this topic was at different stages of our life, write down said perceptions , and present them to the rest of the group. The instructions were given in English and Darija, and we began the workshop.

My group was assigned the topic of race. Immediately, there were several problems. The Sultan Moulay students began the discussion in Darija; after a minute, one student translated that they were not sure how to answer the question, as they were all the same race. The American students and I tried to explain how racial identity is different in the United States because of its vast racial diversity; but such an explanation was difficult to translate as many of the students were not fluent in English, and we could not explain in Darija.

This immediate roadblock made the rest of the discussion difficult. We did not have the same baseline ideas of race; understandably so, as race is a social construct that differs from country to country. Morocco has less racial diversity, and more emphasis is given to cultural and regional differences. ‘Moroccan’ is an ethnic identity as well as a cultural, geographical, and political one. On the contrary, only Native Americans are ethnically American. Because of significant immigration to the United States, many people also align more heavily to their culture of origin as opposed to a homogenous American culture.

These concepts could have been explored much deeper, but we had a short amount of time to complete the workshop, much of which was used attempting to translate between Darija and English. At the end, I felt uncomfortable with the lack of depth with which we presented such a complex and multifaceted topic. I was concerned particularly at the idea of my individual perception of race in the United States being used as a definition. As a white woman, I have a very different understanding of and experience with race than people of color, whether they are born in the United States or have immigrated there.

The lack of shared definitions on such broad topics reminded me of an earlier miscommunication when I completed a ‘growing edge’ activity during an IMAGINE workshop. One of the questions we were meant to draw personal reflection on was sexuality. My immediate association with this topic was sexual orientation; however, sexuality is defined within a heterosexual context for this workshop since anything else is a taboo subject in Moroccan culture.. Neither definition is incorrect, but it signifies how cultural differences lead to different assumptions when it comes to broad subjects.

Reaching common ground and having intercultural discussions on complex and broad subjects does not require having a unified definition of the subjects. However, it does require an understanding of other cultures’ differing definitions of said topics. Despite my discomfort with the incomplete discussion of important social subjects, I am very grateful for the opportunity to meet other university students and forge new connections in Beni Mellal.

A Vision for the Future: Tiznit’s Agricultural and Spiritual Cultivation

Ryan Winegardner, UVA/HAF student-intern The road to Tiznit from Marrakech runs through the mountains, a landscape that floats and rises and arcs like the mezzanines and cantilevers and…

By Susana Fernandez On day two of our visit to Tiznit, the first stop was a school in a rural community that desired funding to improve its water…