On the morning of the February 17, 2020, I’m going to pass the day with Imane, Karam, Nic and Yossef: international HAF convoy. In the car, the music gives the rhythm to the landscapes which pass before our eyes. Linkin Park and the Norman singer Orelsan are coming on the trip.
I learn thanks to Karam, the historian of the group, that the Moroccan villages generally bear the name of the first inhabitant or of the most powerful person in the village. 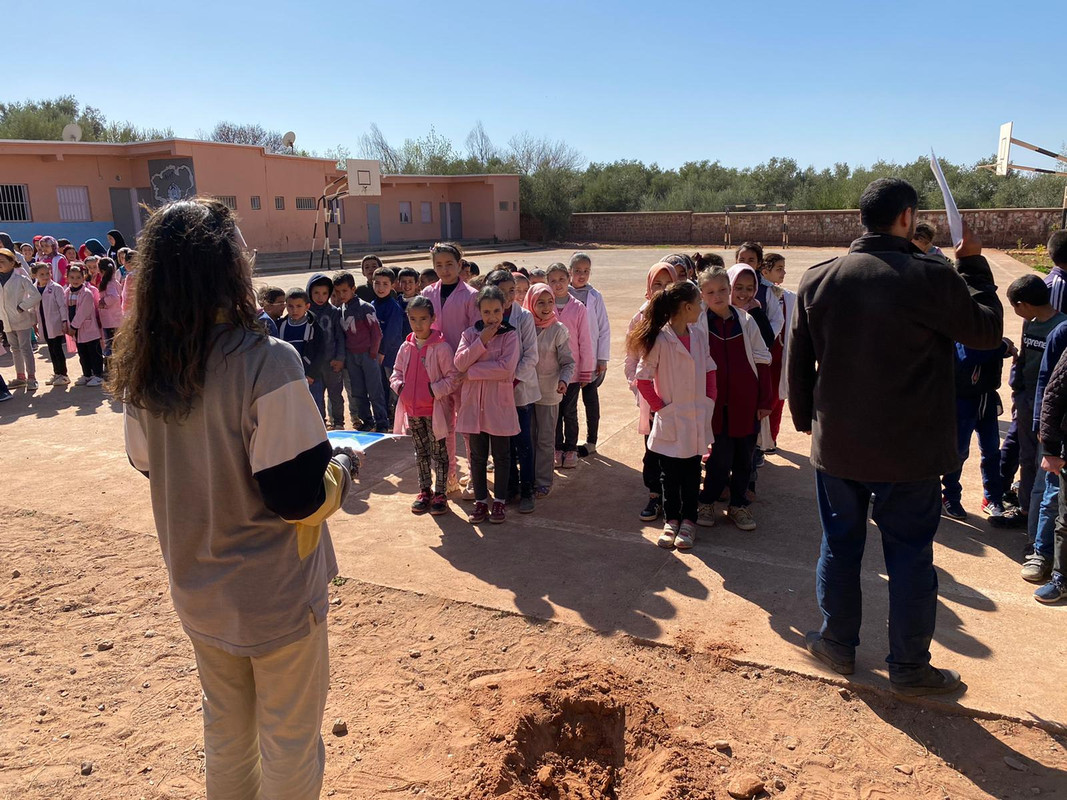 The first school we go to is in the commune of Sidi Abdallah Ghiat in the Al Haouz province. The schoolyard is surrounded by several small gardens tree-filled: olive trees, chiba (wormwood), rosemary; turtles, hedgehogs and cats are walking around the school grounds. All this fauna and flora gives a pleasant and relaxing atmosphere.

Pupils who participate to the workshop are about ten years old. They form a circle around Imane who first makes them play so that they are really attentive, then follows up and asks them questions about global warming, environment, the role of trees… The children, in small groups, took care of planting the trees, compacting the soil, filling in the holes, watering the young shoots… with our help.

Planting trees whets the appetite! The teachers present at the workshop invite us to have breakfast with them.
The road is lined with high trees: for a moment I thought I was in the middle of the pines in the Gironde area. I closed my eyes, when I opened them: what a magnificent sight the snow-covered mountain tops are.
Now we are at the middle school Nour Alatlas, the workshop only starts at 2:30 pm, but the teachers invite us for lunch.

The workshop begins with about 50 young people between the ages of 14 and 16. After a more or less successful attempt to get the teenagers to play, Karam interacts with the group by asking them questions about the environment, climate change… Then, they were given sprouts that they planted in the holes they had previously dug. 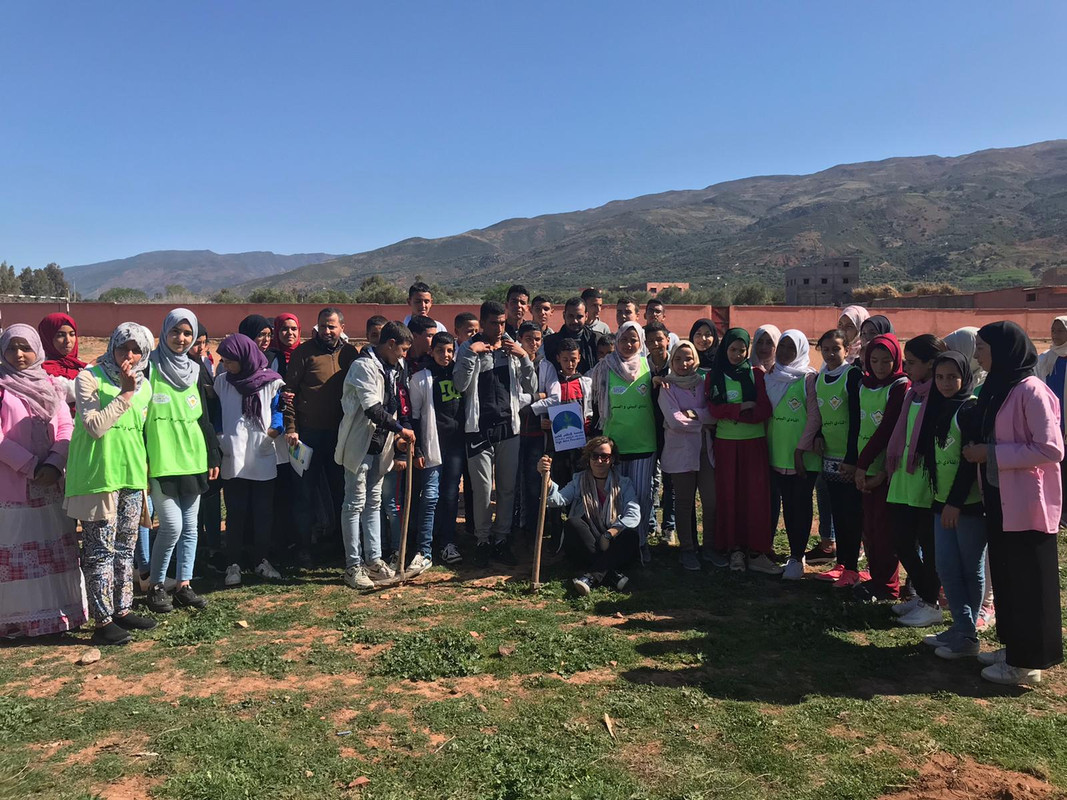 Today is February 18, 2020, let’s go for a new field trip day with Imane, Karam, Nic and Hassan, a project assistant in HAF. We take the road to Ouarzazat: a beautiful and long day begins.

We arrive to the first primary school of the day, the Talbanin school: 88 kids are here for the workshop. The children form a circle and Imane asks them, by turns, to say a word that evokes the environment. After that, the kids start planting the trees.

Looking at the earth at my feet, I notice that there are pieces of plastic bags, a razor, bits of paper, shoe soles, bottle caps…

We planted about 12 trees, after that we presented a diploma to some children and we took some group pictures. Then, we ate breakfast in a classroom: very cool.

Back on the road: heading for the Machtoun school group.
15 girls and 16 boys about ten years old hold hands in a circle and let’s go for the little ritual game. Karam quickly asks them questions about the environment, the role of trees… The girls don’t dare to answer in front of the boys, even though they know their shyness takes over.

Third school of the day: the Tizi school. I was frightened to find that at the bottom of the courtyard was a vegetable garden of rubbish… Despite that, a group of 19 girls and 17 boys are ready for the workshop: ritual play and ritual questions. Five holes had already been dug, the children dug others so that they could plant even more cypress trees. So far, this is the only school that has added manure when filling in the holes. Time for a cup of tea and we are off to the last school: the Tidili school group where 180 primary school children are waiting for us. Imane takes care of one group while Karam looks after the other. The children, in groups, share the holes and plant.

We shared a tajine, fruits with teachers, and we visited the library in front of the school before coming back to Marrakech.

We have visited six schools in two days, and 130 trees have been planted today.
Out of the 6 schools we visited during these two days of field work, I observed that most of the teachers are men, if not all of them. The few female teachers we met were mainly concerned with young children. On the other hand, I don’t think boys are more concerned about climate change. However, in all the schools we visited, they were the ones in charge of watering, digging new holes… Girls dared not participate as much as boys: for fear of ridicule? Are they simply used to not talking often?

All the children were happy to leave their daily routine by planting trees, some more involved than others. I think it is important to make the younger generation aware of all these worrying issues. And in my opinion, it is also the role of the school to raise awareness about waste. In three of the four schools visited on Tuesday, all kinds of waste were littering the ground. I doubt that an empty yoghurt pot is a natural fertilizer, or that plastic bits grow like dandelions.

Dear Friend, I have often felt that each project is a miracle, literally. When we look back during times of shared evaluation, who could have known or predicted…

HAF Volunteer [Jingxin Wang is a college student from China who attends school in Philadelphia, Pennsylvania, in the United States. She is currently on a “gap year,” volunteering…