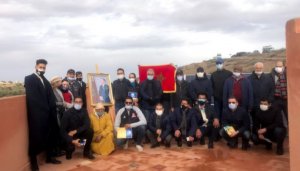 On Sunday, February 20, 2021, the High Atlas Foundation inaugurated the solar water pumping system at our Akrich nursery.
We are grateful to our partner FENELEC for donating the system and for their commitment  to promoting renewable energy solutions in Morocco.

On February 28, 2021, the High Atlas Foundation (HAF) inaugurated an eco-friendly, solar energy water system for irrigation at the Akrich Nursery. HAF inaugurated the pump alongside the National Federation of Electricity, Electronics, and Renewable Energies (FENELEC) near the town of Tameslouht in the Al Haouz Province. Akrich, one of HAF’s 12 organic fruit tree nurseries, was constructed on land that was provided by the local Moroccan Jewish community.

This nursery grows 35,000 seeds every year since 2012 that will, upon maturation, be distributed to farming communities, schools, and women’s associations around Morocco as part of HAF’s initiative to plant millions of trees for increased environmental awareness, sustainable agriculture efforts, and economic empowerment.

The event started with a welcoming word from HAF president Dr. Yossef Ben-Meir. He welcomed each guest, recognizing that though they may come from different cultures and communities, they share the same love for Morocco and the same interest in planting trees. The event attendees were then invited on a tour of the grounds, allowing them to have a clearer picture of how this community-led nursery has an impact on the surrounding community.

After the tour, Moulay Hassan Aladlouni, HAF Farmer-to-Farmer (F2F) Country Director, introduced the partners who have made this project such a success. First and foremost was FENELEC’s President, Mr. Ali El Harti. We are grateful to our partner FENELEC for donating the system and for their commitment to promoting renewable energies in Morocco. He also extended HAF’s gratitude to USAID and the F2F program for sending US experts to Morocco to help farmers overcome problems that they face in agriculture around Morocco. Next, he recognized HAF’s partnerships with Moroccan institutions such as the Ministry of Water and Forests, the Ministry of Education that support the High Atlas foundation to be actively involved in achieving Morocco’s vision.

Hajiba Boumasmar, HAF Program Coordinator spoke next, emphasizing the importance of trees both as an action to fight climate change and as an opportunity that creates a source of income, independence, and job opportunities in marginalized communities. She also introduced HAF’s recent nursery opening in Ouarzazate. This nursery is HAF’s 12th community-managed nursery; it was also created in a partnership with the Moroccan Jewish Community. Hajiba finished her speech by noting that “projects like these nurseries are the ones that continue to exist and serve as an investment toward the next generation even after one’s death.” Dr. Yossef Ben-Meir, FENELEC’s President, Mr. Ali El Harti, and the representative of the Moroccan Jewish Communities in Akrich celebrated the inauguration of the solar water pumping system together, pushing the start button for the first time. All of the partners and the individuals that contributed to this project were invited to join in a group photo to mark the occasion.

The picture was followed by a breakfast that was organized to serve as an opportunity to share food and discussions among the guests, HAF staff, FENELEC staff, the representatives of the Wilaya of Marrakech- Safi, and members of the Moroccan Jewish Community.

During breakfast, Dr. Yossef Ben-Meirspoke again about the importance of community and partnership in interfaith initiatives. His speech consisted of words of gratitude and appreciation toward all the attendees. He recognized HAF’s partners for their commitment and engagement in all the processes of the project as well as their willingness to collaborate and engage in turning future projects into reality. The core of his speech highlighted the unity of Moroccans, regardless of their culture and beliefs, and their interest in a common goal which is a leading Morocco. The speech ended with an agreement between the speakers and attendees that “We are all siblings; we are all Moroccan.”

As the event came to a close, Dr. Ben-Meir gifted all the partners with small carpets. These gifts served as a symbolic thank you while also celebrating the products of a Women Cooperative in Akrich that was created in partnership with HAF as part of our women’s empowerment initiatives.

As a final gesture of gratitude for interfaith and multicultural projects, HAF distributed 6,000 trees to farmers who came from the local village as support and encouraged them to start planting fruit trees as a means of economic empowerment. The HAF team also planted a tree in the name of Mr. Ali El Harti’s father as a way of showing gratitude towards Mr. El Harti and FENELEC’s support.

To read more about our events through the eyes of the Moroccan Media, Please visit the following links: Farmer to Farmer Success Stories: Reflections from the Field

Zineb Laadam HAF Farmer to Farmer Field Officer The women of the Ghmat Division Cooperative have started producing honey thanks to our partnership with USAID’s Farmer-to-Farmer program. January…