FEDERATING THE LOCAL ASSOCIATIONS OF MOHAMMEDIA 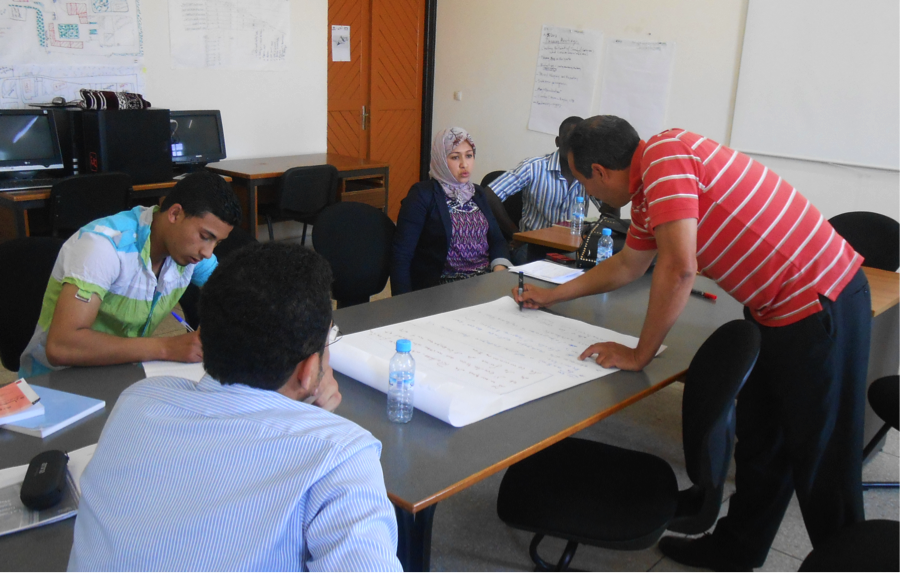 This week, the project team met with representatives of associations in the Mohammedia commune to follow up on their efforts to create a Federation of Associations as way to consolidate efforts and create synergy and effective partnerships.

In Morocco, Al Haouz remains the only province out of 62 in the Kingdom to have a Federation of its local associations (which HAF is part of), which greatly assists the prospects of broad-based advocacy of important issues, scaling-up successful projects, the dissemination of information, and partnerships for local project sustainability.

Representatives of participating associations reported about the process of finalizing the Federation by-laws and other necessary legal documents required for the registration with the provincial public administration. The meeting was an opportunity to review and discuss all articles of the proposed by-laws and suggestions were made to include others. As a result the participants decided to meet on May 25, 2013 to hold the constitutive general assembly for the Associations Federation.  Mohammedia is on its way to becoming the next province with a federation of its associations – a vital evolution for bottom-up social development.

During this meeting, the project team members also facilitated a discussion about the Community Center project. Following the recommendation of Ms. Amina Achagui, an elected official from the Mohammedia commune and in charge of the social division at the commune, it was decided to present an official request to the president of the commune to delegate the use and management of an existing center to the future Federation of Associations. The participating representatives agreed to lead the process and seek the project team’s assistance and support when needed.

The meeting was also an opportunity to review the list of selected project ideas with the aim to resume working on these projects as soon as the general assembly for the Associations Federation is done.

During another meeting, the project team also met with representatives of students working groups. Three working groups were created in previous meetings and each assigned a task to assess a different theme from the University project ideas list.

The meeting was very productive as the participating students had the opportunity to present findings from the assessment and research done on the “Communication curricula thought at the Faculty” topic.

As they demonstrated a good understanding of the techniques and tools presented, the students decided to continue working on the project framework later on their own.

AN UPDATE FROM THE COOP

On the 5th of May, HAF delivered sewing and embroidery equipment and material to the women’s coop in Tassa Ouirgane. The women were so please to receive this…

This Mother's Day, honor your mother for all that she has given by giving back to mothers, who have formed a cooperative, in Tassa Ouirgane, Morocco. The High…