“Ethics in Action”: An Event with Ban Ki Moon 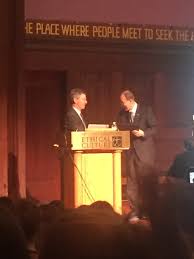 “Everything will seem easier after this,” proclaimed Professor Jeffrey Sachs to the outgoing General Secretary Ban Ki Moon at an event in New York, this past Wednesday evening. Sachs, the Director of the Earth Institute at Columbia University, hosted the Secretary-General on behalf of the New York Society for Ethical Culture to honor his service at the United Nations for the better part of the last decade. “Ban Ki Moon was always able to manage under remarkable pressures and get us where we are this evening,” Sachs remarked.Moon was presented with an award for Ethics In Action before taking the podium to speak about his time as Secretary-General.

Secretary-General Moon spoke at length about his close relationship with Pope Francis during his tenure, noting that he was the first pope to visit during the high level session of the General Assembly meetings. “He and I worked very closely to make sure that climate change is agreed and sustainable development will deliver all the necessary things for many people around the world,” he noted with respect to his conversations with Pope Francis. He highlighted the severity of climate change declaring its prevention a “moral imperative.” When asked of his thoughts with regard to the global refugee crisis, the Secretary-General was quick to make the comparison of refugees during World War Two. The sheer amount of refugees in need has caused a backlash leading to a lack in compassion. Global solidarity must be attained through compassionate leadership. “We will see that we live in a small world after all,” said Secretary-General Moon. He chose to highlight human rights as the central framework under his leadership. “It is part of our identity,” he remarked.

Note: Since 2011, the High Atlas Foundation has Consultative Status at the United Nations Economic and Social Council.  HAF Members are given the special opportunity to attend U.N. sponsored events, conferences, and symposia

My Experience with the Natural Environment

By Amina El Hajjami High Atlas Foundation Project Manager I was born in a modest agricultural village in High Atlas Mountains on the outskirts of Marrakech. I grew…

Montasser Namouji HAF Intern-Journalist Inside the High Atlas Foundation’s operating office, I personally feel the family and responsibility spirit, which are motivating everyone to do their own best…