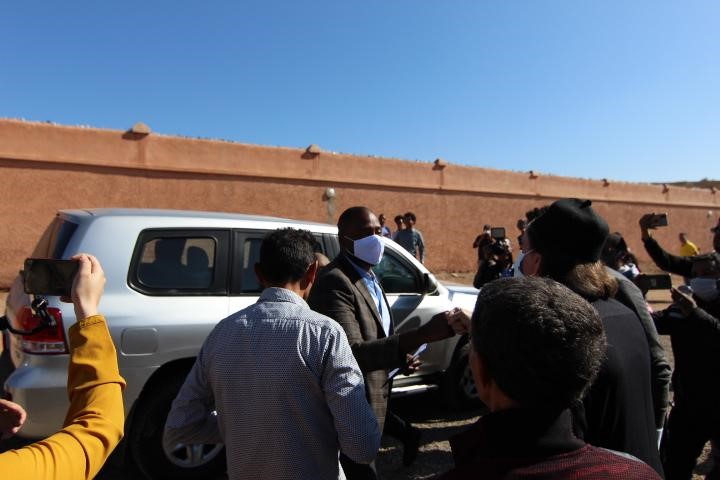 Akrich, an Amazigh village in the foothills of the High Atlas Mountains, is where the first of HAF’s interfaith tree nurseries was founded. This small village packed with culture is exactly where the “Seeds of Memory” event was held.

The event started with the arrival of the U.S. Consul General, Mr. Lawrence M. Randolph. As soon as he exited the vehicle, he was surrounded by press and participants. Mr. Randolph was shown around the premises of the nursery and was led to meet the President of the Marrakech-Safi Jewish community, Mr. Jacky Kadoch.

Eventually, the crowd was ushered into a building near the edge of the premises. Inside were all of the guests, Jewish community members of Marrakech and Akrich community members who are Muslim. Symbolic candles were collected on a tray, next to the 700 year-old tomb of Rabbi Raphael Hacohen. It was a moment of peace, with everyone coming together in a small, dimly lit space with people of different religions, ethnicities, mother tongues, and nationalities lighting candles that symbolized hope.

Nonetheless, this was not the only special moment of the event in Akrich. Dr. Yossef Ben-Meir led the way into the main space. Groups formed together at the tables, including the members of the local Achbarou Women’s Cooperative. The circular tables and the snacks and drinks they held assisted intermingling among the people present. 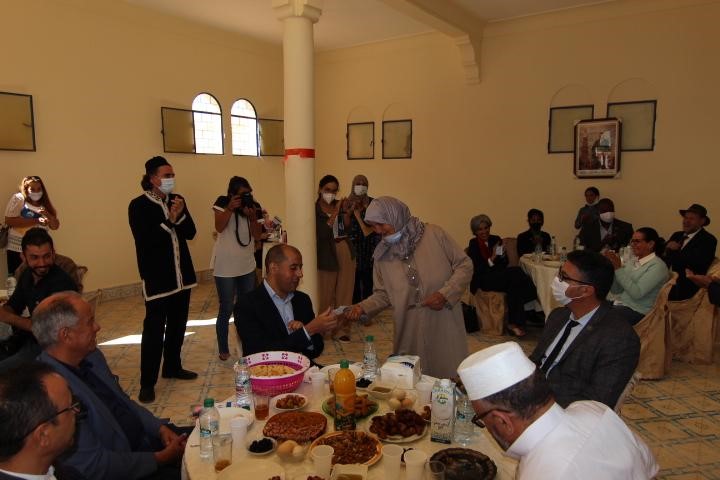 A member of the Achbarou Women’s Cooperative giving business cards to the guests after sharing her story at the first HAF House of Life interfaith nursery in Akrich, Morocco. November 2021. Photo: Noah C. Kohlmayer/HAF

First, Dr. Ben-Meir made a speech in Darija, inviting members of all communities to speak and talk about their memories of Moroccan multiculturalism and what these experiences mean to them. Following his lead, Muslim and the Jewish people individually made their speeches, of childhoods, of the future, and narratives of their enduring ties. Towards the end of a speech by Mr. Jacky Kadoch, he said a prayer in Hebrew asking for God’s blessings for all of us including His Majesty the King Mohammed VI, for which everyone stood up, truly showing respect and appreciation.

The U.S. Consul General made a speech in Arabic, which attendees listened to welcomingly, as it had an aura of connectivity between the different parties, similar to the Jewish prayer. Various people with different backgrounds continued to come forward after his speech, sharing their own stories, all of which felt close to heart and personal to each and every individual.

During the experience a local community member gave each of the guests a hand-knotted carpet from their cooperative. Seeing her share the cooperative’s work, it was clear that this unique opportunity to do so was of great personal importance for her and her fellow cooperative members.

Following this heartfelt moment, the crowd once again headed outside, where the tree planting experience took place. The U.S. Consul General and other guests together planted a young fig tree, a symbolic act for a brighter, sustainable, and intertwined future amongst nature and various ethnic and religious groups in Morocco.

The Austrian Service Abroad is an alternative to the compulsory military service in Austria, the idea behind it is to take responsibility for the past and future – especially considering Austria’s condemnatory historical past. Furthermore, the acknowleding of and the sustainable handling with the Holocaust topic is a major part of the work with the Austrian Service Abroad.

This event was part of the USAID Religious and Ethnic Minorities Activity (REMA), which is implemented by the High Atlas Foundation and its partners. REMA aims to explore and strengthen inter-religious and inter-ethnic solidarity through community efforts that preserve cultural heritage in Morocco.