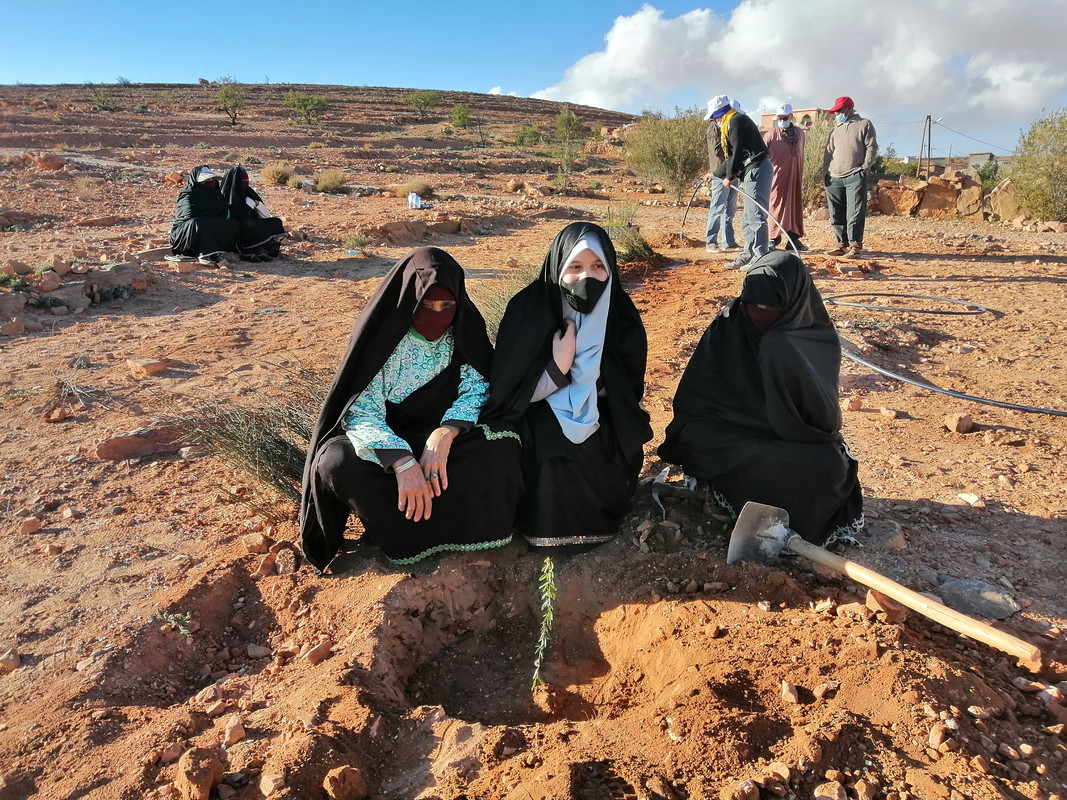 Climate change is likely the most urgent crisis facing us in the 21st century. Rising temperatures are causing increasingly frequent and severe natural disasters, more droughts and heat waves, precipitation changes, and sea level rise. Consequently, this is leading to high levels of food insecurity, mass displacements, the spread of disease, and many other social, economic, and political challenges worldwide.

Morocco is particularly vulnerable to climate change. Since the 1960s, Morocco’s climate has increased by 1°C, and projections indicate an increase of 1-1.5° until 2050. This temperature increase is associated with reductions in mountain snow cover and in rainfall; projections indicate a decline of 10 to 20 percent in average precipitation across the country by 2100. Consequently, droughts are becoming more frequent. Sea level is projected to rise between 18-59 centimeters by 2100, threatening 60 percent of Morocco’s population which inhabits coastal cities. Some areas of the northern coast are already eroding by 1 meter each year. Lastly, water resources are also under increasing pressure, with water shortages now expected by 2020 and 2050 in many southern regions.

Climate change will have devastating consequences on all sectors of the population, but women will bear the brunt. Women across the globe are highly dependent on natural resources, as they are typically tasked with collecting water, food, and fuel for cooking. As droughts and water scarcity increase, women and girls spend more time and energy collecting water instead of earning money or attending school. Furthermore, women often face unequal access to resources and limited mobility in rural areas, restricting their ability to provide for themselves and their families. Moreover, a World Bank survey in 141 countries in 2012 reported that 103 nations impose legal differences on the basis of gender that hinder women’s economic opportunities. With fewer rights and economic capacities, women are often at greatest risk when natural disasters strike. Disasters such as extreme droughts or floods can lead to women’s displacement from their homes, as well as early marriage or prostitution to alleviate financial pressures caused by the loss of livelihoods.

Women are one of the most vulnerable demographics to the climate change crisis, but their involvement and empowerment is also crucial to its solution. 51 percent of the world’s population is women and girls, and their needs, perspectives, and ideas must be considered in effective, equitable, and sustainable planning to curb global warming.

For one, the climate crisis threatens the world’s food systems, and the Food and Agriculture Organization estimates that we must raise food production by 70 percent by 2050 to feed the growing population. Women comprise 43 percent of the agricultural labor force in developing nations, yet they are often denied loans, land ownership rights, and other resources, which hinders their ability to produce maximum yields. Meanwhile, many forests are cleared each year to grow more crops, contributing significantly to climate warming. If provided with the same access to resources as men, women could increase their agricultural yields by 20 to 30 percent, reducing world hunger by 12 to17 percent. If women’s farms yielded as much as men’s, about 2 billion tons of carbon dioxide would be prevented from entering the atmosphere between now and 2050.

Moreover, a report by the climate research organization Project Drawdown estimates that increasing girls’ education and women’s access to family planning would reduce the amount of carbon that enters the atmosphere by 85 gigatons by 2050. Giving women access to high-quality reproductive healthcare allows women to choose how many children they have, curbing population growth and reducing global emissions. Additionally, the more education a woman has, the fewer children she has. Granting women and girls the right to education also increases their economic opportunities, decreasing their vulnerability to climate change, and may also increase their influence in the political sphere. Countries with high representation of women in politics are more likely to ratify international environmental treaties and undertake stronger efforts to combat climate change, yet a 2015 study reviewing 881 environmental sector ministries from 193 countries found that only 12 percent of environmental ministers were women.

The High Atlas Foundation (HAF) is doing important work to empower women in the agricultural sector, including through the USAID Farmer-to-Farmer Program which it implements, to tackle climate change in Morocco. HAF engages women in rural communities to plant organic fruit trees that build food security and reduce carbon emissions. Through a participatory development approach, HAF also works to improve women’s project management, decision-making, and leadership capacities, empowering them to initiate changes in their communities that promote the well-being of both people and the planet. Ultimately, empowering women empowers societies to tackle climate change, and we must engage women if we want to protect the planet and humanity.

Shivani Lakshman is an Intern at the High Atlas Foundation and a student studying environmental sciences at the University of Virginia.

Protecting Child Rights and Building Self-Reliance: How to Change the Life Course of Detained Moroccan Youth

Nicole Luz HAF-UVa Intern When people speak of the protection and upliftment of children, those in juvenile detention are often forgotten. In Morocco, children between the ages of…