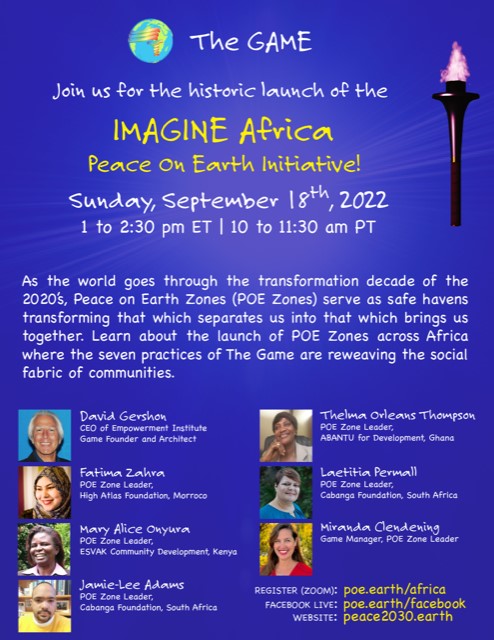 High Atlas Foundation (HAF) is piloting a new project called IMAGINE Peace On Earth by 2030 or POE Zone for short, in partnership with the Empowerment Institute, New York. The main goal for HAF is to Empower Morocco’s NGOs, faith-based groups, and businesses, among others, to lead Reweaving the Social Fabric Cafés, invite their members to play the game and establish POE Zones in communities nationwide.

During the panel discussion, we tried to answer five critical questions:

Moroccan communities, like communities across MENA and around the world are beset by multiple divisions. They separate themselves by ethnicity, religion, and politics among other things. As a result, the social fabric of these communities is frayed and, in some cases, torn asunder.

This Reweaving the Social Fabric Cafe is a four-hour community empowerment process designed to facilitate healing and transformation through inviting communities on a peace building journey. It is the community agency building complement to IMAGINE’s personal agency growth process. It is for those who are tired of complaining about the discord in their communities and wish to take personal action to transform them. A community changes one person at a time and begins with each individual making that choice. The Reweaving the Social Fabric Cafe provides a pathway to making that choice and the tools to implement it.

At the completion of the Reweaving the Social Fabric Café it introduces a game called Peace on Earth by 2030. The game is based upon the 1986 First Earth Run which engaged 25-million people and 45 heads-of-state in 62 counties including Morocco. Through the global media a billion people watched the torch of peace traverse the planet stopping wars the uniting the world as one. Its success strategies have been translated into 7 actions that make up the Peace on Earth by 2030 game.

A team of 5-8 people meet locally or virtually eight times using an online platform and support one another to take the 7 actions. A key goal of the game is establishing Peace on Earth (POE) Zones – communities applying the seven actions to reweave the social fabric and create cooperative solutions to its challenges. A POE Zone’s long-term goal is to empower residents to live in harmony with self, each other, and the Earth. We call this a golden age community.

Fatima Zahra Laaribi is leading peace on earth project and representing HAF, Morocco. What motivated her to create the POE Zone is the realization that everyone talks about peace, but no one actually teaches peace. She was attracted to engage because The Peace on Earth Game components offers the chance to experience actions of peace, witness the journey towards peace, and learn from it.

The Peace on Earth Game is a life changer. She feels a deep desire for her community to be given a new opportunity to make a positive change, especially for women because achieving gender equality prevents violent conflict. Moreover, she really want her community to return and commit to actions of peace including cooperation, and oneness to achieve gender equality. She used the word ‘return’ because this is also rooted in her culture and the Islamic faith, which unfortunately has been challenged over the past decades. Her ultimate goal is to have a unified community where both youth and adults of all genders advocate making peace a reality.

The High Atlas Foundation (HAF) created a POE Zone because HAF advocates for gender equality through women’s and girls’ empowerment. HAF considers women’s human rights at the core of its organization’s goals. Improving women’s rights in Morocco is based on empowerment methods aligned with Islamic precepts. HAF aims at combining human rights advocacy with the promotion of personal growth and socio-economic independence. It is important to note that gender equality is not solely a women’s issue but a human issue. Achieving women’s rights development guarantees basic human rights for all people. In sum, both youth and adults of all genders, must unite and advocate for a stronger, healthier, and more peaceful society. The POE Zone will help to empower the community to achieve more and better together.

Peace is a way of living together so that all members of the community can accomplish their human rights. The Empowerment Workshop for women’s cooperatives will make a POE Zone in these areas more suitable. That is to say, if women are financially independent will create more peace within and the community as a whole. Moreover, this will allow us to achieve our goals and build a stronger foundation for scaling and continuing to develop community agency and leadership capacity.

Thus, Individual agency is embedded in all HAF curriculums/programs this organically leads to the community agency because all the community dialogues and participatory meetings, and empowerment workshops is done collectively.

Fatima Zahra’s vision is to create peaceful zones where both men and women live in harmony within their households. Moreover, she aims for a community where children are raised in a healthy and peaceful environment. She wish to see people starting with peace within themselves, before aiming for peace for their community, and ultimately across the country. She firmly believe that the Peace on Earth Game will make a difference because it provides the community with tools that empower both men and women to live in harmony. She really wanted to see the new qualities of cooperation, oneness and solidarity between Men and Women. HAF will offer the appropriate conditions for the communities to be able to address its issues in the most effective ways. With the help of certified female staff-members, HAF will begin to train the community leaders, activists, elected communal council members, and heads of the associations who collaborated with HAF to build a Team of Peace in each community.

Our POE Zone is located in the Ourika Valley in the province of Al Haouz, Marrakech-Safi region, Morocco. Ourika is a small town with rural communities 60 km south of the city of Marrakech on the footsteps of the Atlas mountains. Based on 2014 census, the community has a total population of 37,316 people of which 18,129 females and 19,187 males. Regarding the age; 14.5% are younger than six years old, 19.2% between 6 and 14 years old, 58.6% between 15 and 59 years old, and 7.7% are 60 years or older. 53.9% of the population is unmarried while 42.4% is married. Less than one percent of the marriages end up in divorce while 3.2% widowed. The common age for marriage in the community was 26.1 years old.

HAF chooses this location because HAF has a lasting, strong and constant relationship with the local communities of Ourika. HAF is very familiar with the local context and needs of the community. Last year, HAF planted 120,000 fruit trees in the area and are planning to plant this year another 80,000 trees. Furthermore, 23 out of the 61 Imagine Workshops conducted by the foundation were conducted in the Ourika Valley. The rural communities of the Ourika Valley have benefited from nine Imagine Workshops.

The diffusion approach of HAF is focusing working with the Ourika communities. We will start with the rural communities in the Ourika Valley, including Setti Fadma and Oukaimden. After this, we will focus on the areas located closer to Marrakech.

So far, HAF has formed three teams of 5 players.  The number of participants is 15 formed in teams of 5 people each. The people who are playing the game are part of our organizations including apprentices and Managers of programs as well as five of them are women’s cooperatives that deal with Agriculture and Artisanal.

HAF’s scaling strategy means we will work with the Ourika area communities, beginning with the rural communities located in the valley (including Setti Fadma and Oukaimden). Then, we will create many POE Zones in all the places where HAF projects are taking place. Then, we will move closer to Marrakech and across the country. Increasing and expanding the number of players will be an ongoing process.

Fatima Zahra had a chance to play the game and she learnt that the Empowerment Workshop impacted her team’s ability to fully engage in playing The Game. In the sense that the empowerment workshop assisted her integrated the concept of the growing edge in her daily life and in the game itself. When she started playing the game she found herself dealing with one of her growing edges. A concrete example that illustrated this change is that even though she is Muslim and she supposed to be religious and give zakat, which is an obligatory charity in Islam By recognizing that one’s wealth is a gift from Allah and giving away a portion of it to others, a Muslim purifies the rest of your wealth from greed. She was not doing it but due to Action 5 in the game that focuses on cooperation for the common good, she used her spiritual gifts to empower others by donating an amount of money to help a young man who generates a very little income to get married and create a family and committed to give Zakat. So the game transformed her rooted belief in scarcity into a belief in abundance Moreover it ignited the quality of generosity within herself  and it helped her to discover that she has the tendency of benevolence within herself.

By: Salma Derkaoui World Health Day is a vastly celebrated global event each year on April 7.  This day has been recognized by the United Nations as an…

By Yvette Broex In 2021, 3.6 billion people did not have access to good working toilets. This is a consequence of the fact that toilets are underfunded, poorly…